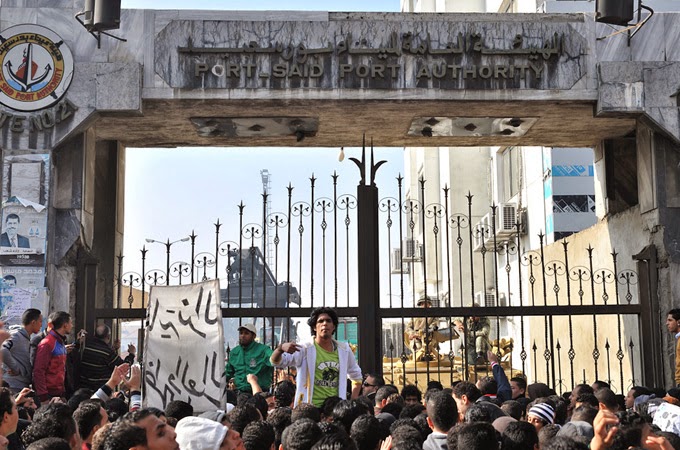 Egyptian-general-turned-president Abdel Fattah al Sisi’s iron grip on dissident is likely to be put to the test with the sentencing to death of 11 soccer fans for involvement in a politically loaded football brawl three years ago that left 74 militant supporters of storied Cairo club Al Ahli SC dead.

The brawl and the subsequent sentencing to death in an initial trial two years ago of 21 supporters of the Suez Canal city of Port Said’s Al Masri SC sparked mass protests by Al Ahli fans demanding justice in the walk up to the court hearings and a popular revolt in Port Said and other Suez Canal cities once the verdict was issued that forced then President Mohammed Morsi to declare an emergency and deploy military troops to the region.

Although the judge in the retrial ordered by an appeals court lowered the number of al Masri supporters facing a death penalty, the verdict is certain to spark renewed anger in Port Said where many see the fans as scapegoats in what was likely an effort that got out of hand by the military and security forces to punish the Al Ahli supporters for their key role in the 2011 popular revolt that toppled President Hosni Mubarak and subsequent mass protests against military rule.

The 11 fans are part of a group of 73 defendants that includes nine polices officers and three Al Masri executives charged with responsibility for the incident in which police and security forces stood by as the Al Ahli fans died in a stampede after their team’s match against Al Masri in a Port Said stadium whose gates had been locked from the outside. The court is expected to issue its final verdict on May 30.

Suspicion of some association of police and the military in the incident, the worst in Egyptian sporting history, was further fuelled by circumstantial evidence, including lax security in advance of the match, the signalling of a group of men armed with identical batons in the stadium, and threats exchanged on Twitter between Al Masri and Al Ahli fans in advance of the game.

Mr. Al Sisi’s brutal suppression of dissent since he toppled Mr. Morsi in a military coup in 2013 that has led to more than 1,400 deaths and the incarceration of thousands raises the stakes for protesters and could lead many in Port Said to think twice before taking to the streets. Supporters may also wait until Egypt’s grand mufti rules on the death sentences.

All death sentences in Egypt are referred to the mufti for his non-binding ratification. A decision by the mufti to reject the death sentences could lower temperatures in Port Said but spark anger among Al Ahli fans who celebrated when the initial court sentenced the 21 to death.

The initial indictment of the 73 served to effectively put the blame for the incident on Al Masri fans and evade a thorough investigation of potential involvement of security or military personnel despite the presence of nine local police officials among the defendants. The framing of the case in this fashion made it however impossible to achieve a verdict that would be perceived as equitable by all. The sentencing of the Al Masri fans was always going to leave Port Said unhappy while acquittal or the imposition of light sentences would have infuriated the thousands of supporters of Al Ahli.

The court verdict comes at a sensitive moment in Egyptian soccer politics. The death sentences came days after Egypt moved closer to banning as terrorist organizations militant soccer groups that form the backbone of opposition to Mr. Al Sisi’s autocratic rule with the arrest and pre-trial detention of five alleged members of the Ultras White Knights (UWK), the highly-politicized, street battle-hardened support group of Al Ahli arch rival Al Zamalek SC. The five men were arrested on charges of joining a “terrorist entity” and attempting to topple the regime of general-turned-president Abdel Fattah Al Sisi.

The verdict also followed the start of a trial against 16 people, including UWK members, charged with violent acts, arson and rioting that led on February 8 to a stampede outside Cairo’s Air Defence Stadium in which 20 people were killed. The deaths are widely believed to have been the result not of UWK provocation but of violence by a police and security force that has no experience in crowd control and is notorious for its brutality.

Finally, the court issued the death sentences at a time that soccer fans are at the core of anti-government protests in universities that are controlled by security forces and popular neighbourhoods of Egyptian cities. Leaders of fan and student groups warn that the post-2011 generation is on the one hand more apathetic and on the other more hopeless and nihilistic than the one that participated four years ago in the popular revolt.

The crackdown on soccer fans at a time that league matches are played behind closed doors to pre-empt violence and prevent stadia from re-emerging as venues for the expression of dissent is certain to deepen a sense of frustration. “When the opportunity arises they (the new generation) will do something bigger than we ever did,” said a founder of the UWK who has since distanced himself from the group.