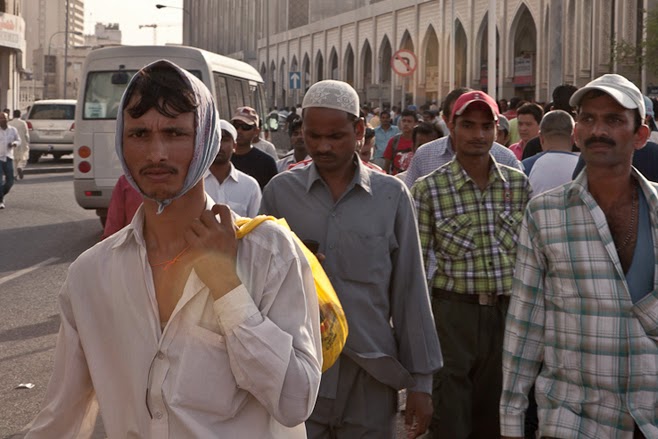 A resolution by the International Labour Organization (ILO) to postpone until November a decision to investigate Qatar on charges of violating the Forced Labour and Labour Inspection Conventions is likely to boost the Gulf state’s ability to defeat any attempt to strip it of the right to host the 2022 World Cup at next month’s congress of world soccer body FIFA.

If the vote in the ILO’s Governing Body is any indication, African, Asian and Latin American FIFA members like their labour counterparts will oppose moves by Western federations to significantly increase pressure on Qatar to reform its controversial kafala or sponsorship system that puts workers at the mercy of their employers.

FIFA president Sepp Blatter on a visit to Qatar last month said the Gulf state had progressed on the labour issue but needed to do more. At the same time, FIFA, according to media reports, has taken the unusual step of inviting Qatar to compete for qualification in the 2020 Euro tournament to expose the Gulf’s state’s national team to high-level international competition and give European squads a chance to meet their Qatari counterpart on the pitch.

Outgoing FIFA executive committee member Theo Zwanziger, a long-standing opponent of Qatar’s hosting of the World Cup, has nonetheless warned that FIFA members could table a resolution at the group’s congress in Zurich to deprive the Gulf state of its hosting rights if Qatar by then had not created an independent commission to monitor its progress toward labour reform. The oversight body was proposed in a report on labour reform by law firm DLA Piper that was commissioned by the Qatari government.

With human rights groups and trade unions frustrated at Qatar’s slow implementation of lofty promises of change, Qatari officials, in a reference to the legislative process, said the Gulf state needs time to reform if not abolish its sponsorship system. More time consuming than the legal process is the government’s need to allay domestic concerns about the fallout of changes to the kafala system.

Many Qatari fears that changes, which would effectively involve granting rights to foreign migrant workers who constitute the majority of the population, could open the door to demands for political rights that would cost Qataris who account for only 12 percent of the population control of their state, society and culture.

Human rights groups like Amnesty International and Human Rights Watch have been more sensitive to Qatari concerns than trade unions who have insisted not only on improved working and living conditions for workers in Qatar but also on granting political rights like the right to form independent unions and to bargain collectively.

In response to the ILO decision, International Trade Union Confederation (ITUC) Secretary General Sharon Burrow, one of Qatar’s harshest critics, effectively accused members of the United Nations’ labour agency of having been bribed by Qatar.

“Qatar used its financial muscle over other governments to buy yet more time, after years of empty promises to bring its system of slave labour to an end.  Worst of all, governments from Asia and Africa, where most of the 1.5 million migrant workers in Qatar come from, refused to stand up for their own people.  A further six-month delay will cost scores of lives as workers are forced to work through the incredibly hot summer months without basic protection and at the mercy of kafala employers,” Ms. Burrow said.

A majority of Asian, African and Latin American FIFA members would have a variety of reasons to oppose increased pressure on Qatar ranging from not wanting to open the door to criticism of their own labour and human rights records to close ties that federations may have not only with Qatar but also other Gulf states.

While Qatar may be winning rounds in international organizations and associations, it is failing in part as a result of continued criticism of its labour system to achieve its public diplomacy goals associated with the World Cup. Sports is one pillar of Qatar’s soft power strategy that aims to project the Gulf state as a cutting edge 21st century nation that is worthy of support in the case of an emergency much like the world did in the case of Kuwait in 1991 when it was invaded by Iraq.

As a result, activists have sought to keep the labour issue in the public eye. French human rights group Sherpa filed a widely reported legal case asserting that French construction giant Vinci had violated the rights of migrant workers who were building stadiums for the 2022 World Cup. Vinci, whose second largest shareholder is Qatar, has vigorously denied the allegation and said it was countersuing Sherpa.

Sherpa Managing Director Laetitia Liebert was quoted by Reuters as saying its legal claim was based on a one-week visit to Qatar in November by one of the group’s lawyers who collected "signed" testimonies of ten to 15 witnesses about their work conditions. In an email to this writer, Sherpa’s legal advisor, Tamsin Malbrand, said the legal complaint it had filed against Vinci was “strictly confidential.”

Qatar’s public diplomacy and soft power efforts are further undermined by at times ill-conceived attempts to impress by excelling as the biggest or the greatest. Al Sadd Sports Club, a club founded by high school students and chaired by a member of Qatar’s ruling family, Sheikh Mohammed bin Khalifa Al Thani, recently hoped to attract 50,000 people to participate in a marathon that would have earned it a spot in the Guinness Book of Records as the organizer of the largest such event. To achieve its goal, the club in a reflection of the country’s demographic dilemma bussed in large number of most South Asian workers who lacked the proper kit for the marathon.

“There was a large mass of labourers wearing jeans, flip-flops and no proper running equipment. Some labourers tried to leave but were turned back and were yelled at that they need to stay and cross the line,” one participant told Doha News.

A club spokesman admitted that workers were bussed in but insisted that participation in the marathon had been voluntary and that none of the workers had been prevented from bowing out during the event.

In the end Al Sadd failed to achieve its goal. Rather than securing a world record, it has sparked one more incident of alleged abuse of foreign workers to bolster spectator attendance or participation in sports events in a botched effort to enhance Qatar’s image. Similarly, an image of a banner raised at the Cricket World Cup denouncing slavery in Qatar went viral on the Internet.

What is true for Qatar’s clumsy efforts at public diplomacy, could become true for the World Cup itself. Said Human Rights Watch researcher Mustafa Qadri on a recent visit to Doha: ““Unless urgent steps are taken, when people marvel at all the buildings and developments in 2022, (they’ll see structures) built on the backs of a lot of misery.”

James M. Dorsey is a Senior Fellow at the S. Rajaratnam School of International Studies (RSIS), Nanyang Technological University in Singapore, co-director of the University of Würzburg’s Institute for Fan Culture, a syndicated columnist, and the author of The Turbulent World of Middle East Soccer blog
FIFA Qatar World Cup 2022