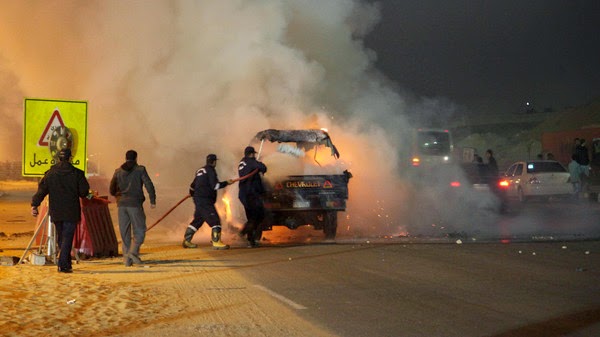 The incident is one of the worst in Egyptian sporting history and the latest in a number of mass killings involving security forces since Mr. Al Sisi overthrew of Mohammed Morsi, Egypt’s first and only democratically elected president, in a military coup in 2013.

It resembled in some ways a politically loaded soccer brawl in Port Said three years ago in which 74 militant fans or ultras died and is likely to re-energize the ultras, one of Egypt’s largest social movements mostly organized in rival groups supporting a specific soccer team. Ultras played a key role in the toppling in 2011 of President Hosni Mubarak, subsequent protests against his military successors as well as Mr. Morsi, a member of the since outlawed Muslim Brotherhood, and anti-government demonstrations against the rise of Mr. Al Sisi.

Like in Port Said, many of the fans in Cairo died of suffocation in a stampede. The stampede occurred when police used tear gas to stop members of the Ultras White Knights (UWK) from forcing their way into Cairo’s Air Defence Stadium where their storied Cairo team Al Zamalek SC was playing a Premier League match against rival Engineering for the Petroleum and Process Industries (ENPPI).

The incident refocused attention on stadia as a major flashpoint of opposition to successive Egyptian governments. It is certain to charge in coming weeks and months other potential soccer-related flashpoints including legal efforts to outlaw the UWK as well as the pending appeal against the sentencing to death of 21 fans of Port Said’s Al Masri SC and lengthy prison sentences for others on charges that they were responsible for the brawl in the Suez Canal city.

Tension could rise further if the government decides in the wake of this weekend’s deaths to re-impose a ban on spectators attending soccer matches that was lifted earlier this month. The ban was imposed three years ago in the wake of the Port Said brawl and has been at the core of scores of clashes between fans and security forces. The government, in response to the incident Cairo, has already moved to suspend all Premier League matches.

With the sequence of events as yet unclear, video of this weekend’s incident suggests that security forces fired tear gas and shotgun pellets into a crowd of hundreds of fans trapped in a narrow alley surrounded by barbed wire. In a statement, the interior ministry blamed the ultras for the deaths, which it said were the result of a stampede that erupted as police attempted to stop fans from entering the stadium without tickets.

The incident occurred days after the interior ministry lifted the ban on spectators attending soccer matches and against the backdrop of so far unsuccessful attempts by Zamalek president Mortada Mansour to persuade the judiciary to outlaw the UWK as a terrorist organization with the alleged tacit support of Mr. Al Sisi.

Mr. Mortada’s son, Amir, asserted in an interview with the Los Angeles Review of Books that the UWK was a front for the Brotherhood in a bid “to show the world that there is no stability in Egypt and to create problems for the current regime at universities and at stadiums.”

Two courts recently rejected the appeal of Mr. Mansour, a colourful larger-than-life character and controversial fixture of the Mubarak era who withdrew his presidential candidacy in elections in 2014 to allow Mr. Al Sisi to run unopposed, on the grounds that they were not the competent authority.

Mr. Mortada has accused the UWK of trying to assassinate him. Denying the allegation that led to the arrest of scores of UWK members, the group dubbed Mr. Mansour ‘the regime’s dog.’ UWK leaders meanwhile went into hiding to evade security forces.

A third court sentenced in January 20 UKW members to several years in prison on charges of inciting violence, assaulting security forces and damaging private property. The sentencing, Mr. Mortada’s legal efforts, and a series of clashes between security forces and ultras sparked in part by a draconic anti-protest law issued by Mr. Al Sisi’s government are elements of an ongoing attempt to criminalize protest. The criminalization endeavour resembles similar efforts by the government in Turkey where like in Egypt militant soccer fans played a key role in mass anti-government protests.

In the past year, members of Ultras Nahdawy (Renaissance Ultras) were prominent in student protests on university campuses and in local neighbourhoods against Mr. Al Sisi’s repressive regime and in favour of academic and other freedoms.

Nahdawy, whose name refers to the term used by the Brotherhood to describe its political and economic program, is the only militant soccer group that openly identifies itself as political and is not aligned with a club. The group was formed by members of UWK and Ultras Ahlawy, the militant support group of Zamalek arch rival Al Ahli SC that was the target in the Port Said incident for which the ultras hold the military and security forces responsible. Nahdawy has asserted that it has distanced itself from the Brotherhood since the group was outlawed as a terrorist organization by Egypt, Saudi Arabia and the United Arab Emirates.

This weekend’s soccer deaths dashed hopes that the Al Sisi government may adopt a less brutal approach to its civil society opponents. More than 1,000 people have been killed in clashes with security forces and thousands of others arrested since Mr. Al Sisi’s overthrow of the Morsi government. Egyptian courts have sentenced hundreds of Muslim Brothers to death. Some of those verdicts have been overturned and Egypt has yet to carry out the execution of any of those convicted.

The hopes of a less hard line approach emerged in early December when Ultras Ahlawy stormed a Cairo stadium in advance of an African Confederation Cup final in rejection of a call by the interior ministry that they cooperate to ensure that Al Ahli would win the tournament. The appeal was designed to pave the way for the lifting of the ban on spectator attendance of soccer matches.

Rather than confronting the Al Ahli ultras, security forces negotiated their departure from the stadium as well as their attendance of the African championship match under a temporary lifting of the spectator ban. The game earned Ahli the African club championship title. Ahlawy members unfolded a huge banner during the match that referring to the ban asserted “Football is for Fans.”

In a statement at the time on its Facebook page with its 1.1 million followers that reflected a widespread sentiment among all ultras groups, Ahlawy warned that “fans have every right to be present in stadiums and cheer on their teams.... We will no longer watch our team on television.”

Taken together, the battles of the students and the fans is one for public space and against efforts by Mr. Al Sisi to depoliticize youth emboldened by its success in overthrowing Mr. Mubarak after 30 years in office and angered by their being side-lined in the wake of their successful revolt and the rolling back of heavily fought achievements.

Lack of public space under Mr. Mubarak who tolerated no uncontrolled public space propelled highly politicized, well-organized, street battle-hardened soccer fans to the forefront of anti-government protest. History threatens to repeat itself under Mr. Al Sisi despite the fact that the president acknowledges that he and his predecessors have failed to reach out to youth under the age of 25 who account for half of the Egyptian population.

That gap was fuelled by the side lining of the youth almost from the day that Mr. Mubarak was forced to resign and was replaced by a military government. It was further evident with relatively few youth participating in a referendum under renewed military-backed rule following the coup against Mr. Morsi and in Mr. Al Sisi’s election. The low youth participation stood in stark contrast to the large numbers that participated in parliamentary elections in 2012 and the polls that brought Mr. Morsi to power.

Mr. Al Sisi has promised to correct the situation by creating a National Youth Council, increasing opportunities for youth participation in politics, and enhancing scholarship openings for study overseas. At the same time, the president warned students and youth from engaging in activity “with questionable political goals that serve the interests of unpatriotic groups in their endeavour to destroy the nation.”

Mr. Al Sisi’s warning appears to have so far fallen on deaf ears with a large number of students, fans and youths evidently putting little faith in his promises. The death of soccer fans this weekend was the latest indication of the president’s failure to convince his detractors of his sincerity.

James M. Dorsey is a senior fellow at the S. Rajaratnam School of International Studies as Nanyang Technological University in Singapore, co-director of the Institute of Fan Culture of the University of Würzburg and the author of the blog, The Turbulent World of Middle East Soccer, and a forthcoming book with the same title.
Al Ahly (Egypt) Al Zamalek Egypt ENPPI Islam Islamists Militant Islam Ultras