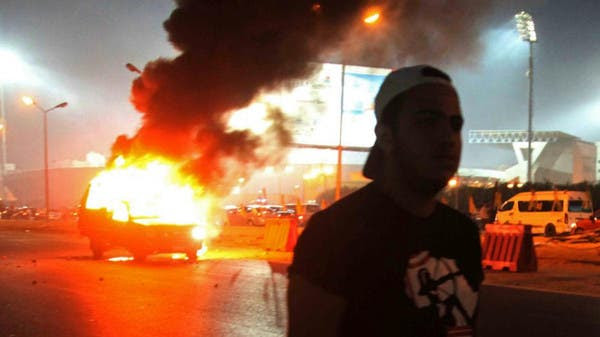 On Facebook, both the Ultras Ahlawy and White Knights Ultras and enjoy enormous popularity - with over 1.1 million and 800,000 followers respectively (Reuters)
Text size A A A
By Paul Crompton | Al Arabiya NewsTuesday, 10 February 2015
In football-crazy Egypt, where major decisions on the sport take place at a cabinet level, rivalling groups of supporters have organized themselves into near-armies, fighting over turf and the glory of the beautiful game - and dabbling in regime change.
Known as Ultras (from the term “ultra-supporters”), and often likened to Britain’s famous football hooligans, a series of violent deaths have appeared in the headlines.
On Sunday, 22 people were killed outside an Egyptian soccer stadium when security forces barred fans from entering. The group known as the White Knights Ultras - associated with Cairo’s leading Zamalek club - were deemed the culprits. In response, authorities announced on Monday that all footballing activities in the country would be suspended.
In 2012, 72 fans were killed and more than 500 injured at a match in the city of Port Said.
The incident, which Egypt’s deputy health minister called thebiggest disaster in the country’s football history, took place after a win by Port Said club al-Masry against Cairo club al-Ahly. At the end of the match, al-Masry fans began attacking al-Ahly’s Ultras, known as the Ultras Ahlawy, who had become known for their vocal anti-regime stance.
But some activists blamed the disaster on the provisional military government, set in place after the ouster of longtime President Hosni Mubarak the previous year.
Egypt’s de-facto ruler at the time, Field Marshall Mohamed Hussein Tantawi, was blamed by Egyptians angered at theapparent inaction, and as some believed, collusion, by authorities to prevent the deaths at the stadium - media reports at the time indicated that police had kept the gates on the Port Said stadium deliberately closed, leading to a fatal stampede.
After the riot, Egypt’s government took the decision to ban domestic league matches for two years.
The first Arab Ultras emerged in Libya in 1989, but were quickly subdued by Qaddafi’s regime. Arab Ultra movements largely disappeared in the 1990’s, only to remerge in the mid-2000s, according to a 2011 book by Mohamed Gamal Beshir tracking the history of Ultra movements in the Middle East.
In 2005, fans from arch-foes al-Ahly and Zamalek formed into two distinct groups, creating a deep-seated rivalry that continues to this day.
In 2011, when the protests began against Mubarak’s rule, the Ultras Ahlawy joined the massive street protests, shouting insults at the ruling elite and calling for the overthrow of the regime.
Just before the protests began to swell, the Ultras Ahlawy sent a Facebook message to their fans, telling them that the club was not politically involved and was neutral.
Yet when the uprising began in earnest, many members of the Ultras Ahlawy were out on the streets in force, said Mamdouh Eid, the former executive director for the now-defunct fan coordination committee for al-Ahly.
During the 2011 revolution, “most of the general [public] in Egypt did not know how to move together as a crowd, and did not how to organize a crowd, how to cheer together or chant anything together,” said Eid.
But with the inherent anti-establishment creed espoused by Ultras the world over, the ability and the experience of the Ultras to fight back police, start chants and organize a crowd filled the vacuum of an Egyptian public ignorant of political activism.
“The members of the Ultras Ahlawy group were the only people who had previous experience because of previous trouble with the police and having each other’s back against the police.”
At this time, the group’s members were arbitrarily beaten and arrested, and regularly strip-searched.
Mid-way through the uprising, when it seemed to fading out, the Ultras Ahlawy’s actions helped restore the faith in the Egyptian people for change, he said.
“They did not run away [from police], and when a lot of the people were getting scared, those groups was not getting scared, and they actually put belief within the other people because of how strong they were together,” said Eid. “It was not intended in that way, but that was the reality of it.”
On Facebook, both the Ultras Ahlawy and White Knights Ultras and enjoy enormous popularity - with over 1.1 million and 800,000 followers respectively. But when it comes to politics, how far does their internal unity lie?
“It’s safe to say that 80 percent of the Egyptian population doesn’t know anything about politics, and the same goes for Ultras,” Beshir told Egyptian daily al-Ahram in 2012.
“The Ultras only stand out because they are a sizeable group, but they are not really unified when it comes to politics.”Spurred on by the success of sports-derived Ultras, other non-sporting offshoots began to take place in Egypt’s crowded post-revolution sphere of political groups. One such group was the “Ultras Rabaawi” organized by supporters of deposed Islamist President Mohammad Mursi in 2013.
And over the last 18 months, Egyptian media outlets often portray Ultras as hooligans funded by fringe political groups – a reference to the Mursi’s now-banned Muslim Brotherhood.
But since the Port Said disaster, the political involvement of the Ultras Ahlawy - the group most heavily involved in the 2011 revolution - is largely dead, according to Eid, although many Ultras still have strong political leanings.
To this day, ultras are still regularly involved in clashes with police.
James M. Dorsey, an academic and author of a popular Middle East soccer blog, wrote that Sunday’s deadly violence from Ultras had “raised the stakes” for current President Abdel Fattah al-Sisi, as his government struggles to reach out to Egypt’s large youth population.
“History threatens to repeat itself under al-Sisi despite the fact that the president acknowledges that he and his predecessors have failed to reach out to youth,” wrote Dorsey.
Last Update: Tuesday, 10 February 2015 KSA 09:16 - GMT 06:16
Al Ahly (Egypt) Al Zamalek Egypt James Ultras