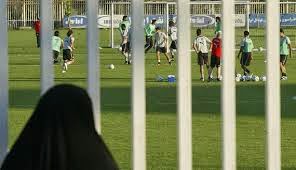 The International Volleyball Federation (FIVB) has warned Iran that it would be stripped of its right to host the 2015 Under-19 men’s world volleyball championship if it bans women from attending matches. The warning signals a new assertiveness driven by the International Olympic Committee (IOC) to make adherence to human, gender and labour rights a condition for potential hosts of major sporting events and raises pressure not only on Iran but also Saudi Arabia, the two nations that bar women from stadia.

The stakes for Iran and Saudi Arabia are high against a backdrop of on-and-off debate in both countries about lifting the ban that has been continuously opposed by religious conservatives.

Growing frustration with Saudi restrictions on women’s participation in international sporting events has prompted the IOC to subtly increase pressure on the kingdom. An Iranian and Saudi refusal could potentially lead to the two countries being barred from international competitions.

To be clear, Iran unlike Saudi Arabia encourages women’s sports and fields female athletes in international tournaments provided they are allowed to wear a headdress that meets both cultural and security and safety standards. Saudi Arabia by contrast evaded being banned from participation in the 2012 London Olympics by fielding at the last minute two expatriate Saudi female athletes, the first time the kingdom officially sent women to an international tournament.

The kingdom has since stalled on fulfilling its promise to encourage women’s sports. A meeting in September between IOC President Thomas Bach, who has instructed his group to write adherence to human, gender and labour rights into all future Olympic host city contracts, and Saudi Olympic chief Prince Abdullah bin Mosaad bin Abdulaziz produced little progress on the issue of women’s sporting rights. Prince Abdullah insisted that the kingdom had failed to field women at the recent Asian Games because it did not have qualified athletes.

Mohammed al-Mishal, the secretary-general of Saudi Olympic Committee, promised however to do so at the 2016 Olympics in Rio Janeiro. Mr. Al-Mishal said however that women would be limited to sports endorsed by a literal interpretation of the Qur’an. The Saudi official said the kingdom was training women to compete in equestrian, fencing, shooting, and archery Olympic contest which are "accepted culturally and religiously in Saudi Arabia".

The Saudi reluctance is further evident in the fact that the kingdom is taking only miniscule steps to encourage women’s sports. The kingdom has hired consultants to draft its first five-year sports plan that focuses on men only.

The country’s Shura Council, a consultative assembly, however, has urged the education ministry to study the possibility of introducing physical education for girls in public schools. The move could lead to a lifting of the ban on female sports in public schools. Moreover, authorities last year began licensing private sports clubs for women.

Women’s gyms are sprouting across the country often linked to beauty salons or in private apartments. “The government does not issue licenses for women’s sports clubs. But as long as there are women who want agile and graceful bodies, such gyms will thrive in the Kingdom,” Fatimah, an owner of a gym, told Arab News.

Efforts to lift the ban on women attending matches in Saudi Arabia and Iran have so far stranded on conservative opposition. The FIVB ban followed the sentencing to a year in prison of a 25-year old dual Iranian-British national, Goncheh Ghavami, for attempting to enter a World League volleyball match Teheran’s Azadi Stadium between Iran and Italy. Ms. Ghavami has since gone on hunger strike. She was convicted of spreading propaganda against the Iranian government.

A FIVB spokesman said that the federation "will not give Iran the right to host any future FIVB directly controlled events such as World Championships, especially under age, until the ban on women attending volleyball matches is lifted." Iran is scheduled to next year host the Under-19 men’s world championship. Argentina has been asked to stand-by to replace Iran as the host of the tournament.

The FIVB made its decision after talks with Human Rights Watch, which has also held met with Mr. Bach. The meeting with the IOC president marked a new era in the group’s attitude towards human rights. Mr. Bach’s predecessor, Jacques Rogge, refused to meet with human rights groups during his tenure.

In a statement, FIVB president Ary Graca said that "women throughout the world should be allowed to watch and participate in volleyball on an equal basis."

Iran’s Supreme Guide Ali Khamenei blocked an attempt in 2006 by then president Mahmoud Ahmadinejad to lift the ban on women attending sports events. Saudi Arabia has repeatedly toyed in recent years with adapting stadia to offer separate sections for women, a proposal supported by the Saudi soccer association. The effort much like similar moves to lift the ban on women driving in the kingdom have so far been stymied by conservatives.

Saudi Arabia has also refused to sign on to a two-year old declaration by the majority of Middle Eastern soccer associations  grouped in the West Asian Football Federation to put women’s sporting rights on par with those of men.

The FIVB sanction fuels Iran’s culture wars that are fought in part in street art. A recent mural on one of Tehran’s main thoroughfares pictured a woman wearing a national soccer team jersey as she washed dishes at home. The mural went viral on social media. In the mural, the woman raised a cup of yellowish dishwash solution as if it were the World Cup trophy in what was seen as a rejection of conservative notions that a woman’s place is at home.

At stake in the battle is however far more than just women’s sports rights. Those rights are part of a larger struggle for Iran’s future as Iran negotiates with the five permanent members of the United Nations Security Council an agreement that would resolve the Iranian nuclear problem. Iranian conservatives fear that a successful negotiation would strengthen the hand of supporters of reformist president Hassan Rohani in parliamentary elections scheduled for the spring of 2016.

With popular support for the nuclear talks, conservatives hope to thwart Mr. Rouhani by appealing to traditional values in their effort to undercut his efforts to reduce repression and allow for greater freedom of expression and access to information, promote gender equality, and ease cultural and educational restrictions. Mr. Rouhani like other members of his Cabinet regularly posts messages on Facebook and Twitter despite the fact that access to social media sites is frequently blocked in Iran. The president has also argued publicly that freedom is a precondition for creativity and has contradicted conservative efforts to curb fun.

James M. Dorsey is a senior fellow at the S. Rajaratnam School of International Studies, co-director of the University of Wuerzburg’s Institute for Fan Culture, and the author of The Turbulent World of Middle East Soccer blog.
IOC Iran Women