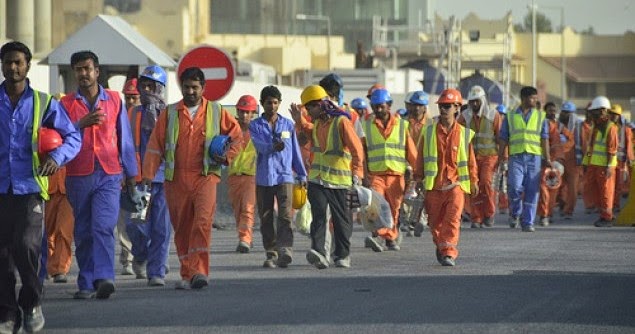 With the absence of labour rights in the Gulf under fire as a result of Qatar’s successful bid to host the 2022 World Cup, Gulf states are likely to take heart from a recent study that asserts that authoritarian regimes in the oil-rich Middle East and China have contributed more to the eradication of global inequality than Western nations.

Human rights and trade union activists, targeting Qatar as well as the United Arab Emirates, have succeeded in persuading two major Qatari institutions, the Qatar Foundation and the 2022 Supreme Committee for Delivery & Legacy, to adopt significantly improved standards for the working and living conditions of foreign workers, who constitute a majority of the Gulf state’s population.

The activists’ campaign has also led the International Olympic Committee (IOC) to adopt adherence to human and labour rights as a condition in all of its future contracts with host cities. FIFA executive committee member Theo Zwanziger moreover conceded earlier this year that human rights would have to figure in future awarding of the World Cup.

The activists have yet to succeed in persuading Qatar to enshrine the standards adopted by the foundation and the committee into national law. Qatari Labour and Social Affairs Minister Abdullah Saleh Mubarak Al Khulaifi told Qatari journalists earlier this week that the Gulf state would revise its labour law by the end of this year. He suggested that the changes would primarily involve obliging employers to pay employees through bank transfers to ensure that they are paid on time.

The legal changes are likely to include only some of the standards adopted by the two Qatari institutions and fall far short of activists’ demands that Qatar abolish its kafala or sponsorship system that puts employees at the mercy of their sponsors by among other things forcing them to secure their employers’ permission to obtain an exit visa. Activists have also insisted that Qatar allow the formation of independent trade unions and endorse collective bargaining, measures that would challenge the Gulf state’s autocratic rule.

Qatar and other Gulf states who have all begun tinkering with their labour regimes as a result of the human rights and trade union pressure on Qatar and the UAE are likely to counter activist pressure by employing the argument recently put forward by University of Chicago law professor Eric Posner in a book entitled The Twilight of Human Rights Law and a recent New Republic article co-authored with law and economics professor Glen Weyl that their sponsorship systems contribute significantly to the reduction of global inequality.

“Foreign migrant workers earn vastly more in the GCC (Gulf Cooperation Council) nations (Saudi Arabia, Qatar, the UAE, Bahrain, Oman and Kuwait) than they would at home in Bangladesh or India, where they would make around $1,000 per year. By welcoming migrant workers, the UAE and its neighbour Qatar do more than any other rich country to reduce global inequality. Through migration, Qatar’s per-person contribution to the reduction in global inequality is almost three times that which would be achieved by eliminating all inequality in the United States, and many times that created by taxes and transfers in any of the rich countries that belong to the Organization for Economic Co-operation and Development (OECD), according to calculations by one of us. If you take into account remittances—in UAE, for example, migrant workers send home more than 75 percent of their salary—the reduction in inequality is even greater,” Messrs Posner and Weyl argued in New Republic.

“Migration has such large benefits because people in poor countries start from such a low base. If you give $4,000 to someone who earns only $1,000, that person’s income increases fivefold, dramatically reducing inequality. If you give the same amount to a poor person in the United States making $12,000, the donation would increase his or her income only by a third. In fact, increasing the income of a truly poor person in a poor country by a factor of five is precisely what would allow her access to the basic goods, like education and health that are the empty promises of human rights treaties. This is why helping the poorest people in the world does so much more to reduce global inequality than do the welfare states of OECD countries, where money is shuffled around between the super-rich and (by global standards) the not-so-poor,” Messrs Posner and Weyl wrote.

The two scholars acknowledge that Qatar and other Gulf states are autocratic monarchies that boast some of the widest income gaps in the world but argue that “reducing inequality will require uncomfortable trade-offs. Qatar would not welcome so many migrant workers if it had to give them generous political and civil rights...” They further note that the West’s emphasis on human rights and the role of institutions such as the United Nations Human Rights Council has failed to pre-empt growing global inequality.

Messrs. Posner and Weyl go a step further by advocating the adoption of Gulf-style labour systems by Western nations. “If the OECD countries copied the migration policies of the GCC countries, they would reduce global inequality by much more than their welfare systems do within their borders,” they wrote.

Leaving aside the morality of defending violations of human and labour rights, Messrs. Posner and Weyl appear in arguing in favour of the kafala system in Qatar and the Gulf to ignore research that counters their assertions in terms of the economic and social impact of Gulf recruitment on the lives of individual workers and therefore on efforts to reduce global inequality. They also overlook the negative impact of the labour system on the development of host countries like Qatar. Research in recent years has established that:
If accepted, the assertion would further serve to postpone the tackling of an unsustainable demographic structure in several Gulf states including Qatar that involves disenfranchising a majority of the population, including those who have resided for decades in the country and who’s second and third generations were born and raised there but have no rights.

It also lends itself to continued promulgation of autocracy in a region that is clamouring for change. Finally, it would undermine chances that the 2022 World Cup would emerge as a badly needed engine of change in a region in which ensuring regime survival at whatever cost suffocates widespread popular aspirations.

James M. Dorsey is a senior fellow at the S. Rajaratnam School of International Studies, co-director of the University of Wuerzburg’s Institute for Fan Culture, and the author of The Turbulent World of Middle East Soccer blog