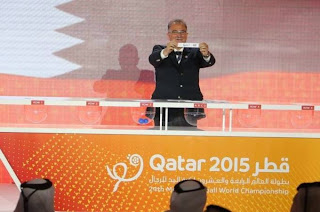 A decision by the handball federations of Bahrain and the United Arab Emirates to boycott the 2015 World Men's Handball Championship to be hosted by Qatar in January signals the failure of efforts to reconcile the idiosyncratic Gulf state with its regional detractors and casts further doubts on the prospects of a Gulf Cooperation Council (GGC) scheduled to be held in Qatar in December.

The boycott by Bahrain and the UAE, which together with Saudi Arabia withdrew their ambassadors from Doha in March in protest against Qatar’s support of the Muslim Brotherhood, follows the indefinite postponement last week of a meeting of GCC foreign ministers in Doha in preparation of the summit. The GCC groups Qatar, Bahrain, Saudi Arabia, Kuwait, Oman and the UAE.

In a speech this week, Sheikh Tamim said he looked forward to welcoming Gulf leaders to the Doha summit. “Regarding our foreign relations, the Cooperation Council for the Arab States of the Gulf remains the main regional home. Supporting it and strengthening our relations with all its sisterly countries, and deepening the bonds of fraternity among us, come at the forefront of our foreign policy priorities,” Sheikh Tamim said.

Kuwaiti media reported that Gulf leaders may meet in advance of the Doha summit in an effort to smooth over their differences. Saudi papers however said that the Doha summit was likely to be moved to either Kuwait or Riyadh.

The boycott of the handball championship by the UAE and Bahrain against the backdrop of a UAE campaign to undermine Qatar’s reputation and credibility as well as the failure of miniscule Qatari gestures to appease the Saudis and Emiratis suggests that positions are too entrenched for Gulf states to achieve a compromise. Qatar moreover is likely to feel more assertive in sticking to its guns now that an investigation by world soccer body FIFA into its World Cup bid has concluded that there are no grounds for sanctioning the Gulf state.

The International Handball Federation said it would discuss the Bahraini and UAE boycott of Qatar at a meeting next week of its council in which it could decide to sanction the two states for their boycott of Qatar. A spokesman for the Bahrain Handball Association said 'we were told by top officials that political tension between the two countries is the reason for not taking part.” Bahrain, beyond its differences with Qatar over the Brotherhood, has accused Doha of offering citizenship to Bahraini nationals.

Qatar has asked several prominent Muslim Brothers resident in Doha to leave the country in a bid to smooth over differences with Saudi Arabia and the UAE who are on the war path against political Islam and see their campaign against the Brotherhood as a cornerstone of efforts to stymie calls for change in in the Arab world. The request was not accompanied by a cancellation of the residence permits of the seven Brothers and some of their families remain resident in Qatar.

Ironically, Bahrain unlike Saudi Arabia, which banned the Brotherhood as a terrorist organization, and the UAE, whose hostility to the group is longstanding, has been reluctant to crackdown on its Brothers because of their support for the island’s minority Sunni regime in its battle with a restless majority Shiite population.

By contrast, Qatar’s differences with Saudi Arabia and the UAE run deep. The refusal of Qatar, alongside Saudi Arabia the only country that adheres to Wahhabism, the puritan version of Islam developed by the 18th century warrior-preacher Mohammed Abdul Wahhab that dictates life in Saudi Arabia since its creation, to bow to Saudi pressure has effectively displayed the limitations of Saudi power. Qatar, moreover, has emerged as living proof that Wahhabism, can be somewhat less repressive and restrictive. It is a testimony that is by definition subversive and is likely to serve much more than for example freewheeling Dubai as an inspiration for conservative Saudi society that acknowledges its roots but in which various social groups are increasingly voicing a desire for change.

The Gulf states’ failure to reign in Qatar has prompted the UAE to step up pressure on Qatar as part of its more activist foreign policy aimed at countering political Islam. In July, the UAE backed the establishment of the Muslim Council of Elders (MCE) in a bid to counter the Doha-based International Union of Muslim Scholars headed by prominent Sheikh Yusuf al Qaradawi, widely viewed as a major spiritual influence on the Brotherhood. The MCE promotes a Sunni Muslim tradition of obedience to the ruler rather than activist elements of the Salafis who propagate a return to 7th century life as it was at the time of the Prophet Mohammed and his immediate successors.

The UAE, despite publicly backing Qatar against calls that it be deprived of its right to host the 2022 World Cup because of alleged wrongdoing in its successful bid and the sub-standard working and living conditions of foreign workers, has covertly worked against the Gulf state. Qatar in September briefly detained two British human rights activists who were investigating human and labour rights in the Gulf state. The detentions exposed a network of apparently Emirati-backed human rights groups in Norway, including the Global Network for Rights and Development (GNRD), and France that seemingly sought to polish the UAE’s image while tarnishing that of Qatar. The Brits of Nepalese origin were acting on behalf, a Norway-based group with alleged links to the UAE.

The New York Times and The Intercept have reported that the UAE, the world’s largest spender on lobbying in the United States in 2013, had engaged a lobbying firm to plant anti-Qatar stories in American media. The firm, Camstoll Group, is operated by former high-ranking US Treasury officials who had been responsible for relations with Gulf state and Israel as well as countering funding of terrorism.

In 2009. Sheikh Mohamed went as far as telling US officials that Qatar is "part of the Muslim Brotherhood."  He suggested that a review of Al Jazeera employees would show that 90 percent were affiliated with the Brotherhood.  Other UAE officials privately described Qatar as “public enemy number 3”, after Iran and the Brotherhood.

James M. Dorsey is a senior fellow at the S. Rajaratnam School of International Studies, co-director of the University of Wuerzburg’s Institute for Fan Culture, and the author of The Turbulent World of Middle East Soccer blog.
Bahrain Qatar Saudi Arabia UAE