Soccer fans in the Gulf vote with their feet 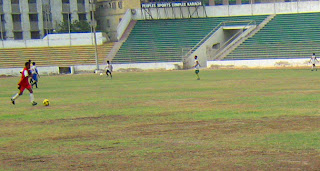 Soccer fans vote with their feet

Soccer is defeating efforts by wealthy, football-crazy Gulf states to impregnate themselves against the wave of protests that have swept the Middle East and North Africa in the past two years and sparked a brutal civil war in Syria.

Once a prince’s uncontested playing ground that allowed royals to curry favor, strengthen their families grip on power and ensure that the soccer pitch did not become a platform for social and political protest, the beautiful game is emerging as the one arena that so far has proven immune to efforts by Gulf rulers to keep demands for change at bay.

In fact, fans are voting with their feet. Not in mass protests as those that toppled the leaders of Egypt, Tunisia and Yemen, but by staying away from matches. What effectively amounts to a fan boycott, is most evident in Qatar and Saudi Arabia, the one Gulf state that boasts nationals as a majority of its citizens who in the past filled stadiums. At a recent match in a dilapidated stadium in Doha, barely a hundred people showed up to watch.

In staying away, fans are demonstrating that stadiums in the smaller Gulf states where local nationals account for at most some 40 percent of the population – in the United Arab Emirates that number drops to 15 and in Qatar to just over 20 percent – are not simply empty because of a lack of bodies and a politically inspired refusal to attract non-nationals out of fear that foreigners binding with a local club could open the Pandora Box of them viewing their host country as more than just a place to earn money and leave at the end of their contract.

Dropping stadium attendance numbers in Saudi Arabia in contrast to the smaller Gulf states has at first glance much to do with poor performance and decaying infrastructure as a result of lack of investment. The drop contrasts starkly with efforts three years ago by the Saudi clergy to persuade fans to fulfill their daily prayer rituals during World Cup matches by sending trucks to serve as makeshift prayer rooms in front of Internet cafes where men gathered to watch a game.

Irrespective of demography, the drop in soccer attendance is at the bottom line proving to be more than just a question of numbers or poor performance and infrastructure and one of an unspoken resistance to control by royal autocrats. As a result, countries like Saudi Arabia and Qatar are looking at restructuring ownership of their premier league clubs to put an unprecedented distance between members of the ruling elite and the game.

Qatar, which is preparing to become the first Middle Eastern and North African state to host a World Cup, the world’s largest sporting event, has taken the lead in restructuring the region’s soccer and building world-class infrastructure out of both the need for massive infrastructure and the fact that the 2022 tournament has put it in the spotlight. It’s hosting of the World Cup when Middle Eastern and North African nations want to demonstrate their region’s soccer prowess has also driven home the need for countries to create the conditions for enhanced performance.

Like Saudi Arabia, Qatar is looking at transferring ownership of clubs owned or effectively controlled by royals. In Qatar, where officials concede that nationals no longer want to watch ‘the sheikh’s club’ play, are looking at the possibility of transferring clubs to state-owned companies, while the kingdom where clubs are government-owned is drafting a plan to privatize them.

Qatar, under pressure from international trade unions that are campaigning to deprive it of its right to host the World Cup, is seeking to improve the much criticized work and living conditions of foreign workers who constitute a majority of the population. Its moves – adoption by the World Cup organizing committee of a charter of workers’ rights, greater safety and security controls and enhanced facilities – fall short of union demands for independent trade unions and collective bargaining.

But the reforms have led to the first chip in barriers erected to ensure that foreigners leave the country once their contracts have been fulfilled. The Qatar Stars League last month organized the first competition for 16 clubs founded by foreign workers and is looking at establishing a league for foreigners that would group 32 clubs. A Qatari sociologist has gone a step further calling on Qatari clubs to establish branches in areas populated by foreign workers.

The Qatari moves follow a program rolled out two years ago by Al Jazeera FC of Abu Dhabi that targeted foreigners by offering them football as well as entertainment. The program, sweetened by a lottery prize of one million dirham ($272,000) and a Ferrari at its final game of the season, helped Al Jazeera quadruple match attendance to 20,000, one of the highest attendance figures in the Gulf.

Protest against performance and royal interference has had the most far-reaching effect in Saudi Arabia where princes are known to phone during a match to for example order the change of a player. In an unprecedented move in a soccer-crazy region in which rulers see political control of sports as essential, fan pressure forced Prince Nawaf bin Feisal, the former head of the Saudi Football Federation, to last year become the first royal to resign from leadership of a sports association. The resignation followed Australia’s defeat of the Saudi national team in a 2014 World Cup qualifier.

The move paved the way for a rare election in a nation that sees free and fair elections as an inappropriate Western concept and the takeover of the federation by a storied former goalkeeper, known to be a reformer and a proponent of women’s soccer in a country that frowns on women’s sports. For now, Prince Nawaf and the Saudi royal family retain their control of soccer through the Saudi Olympic Council and the General Presidency of Youth Welfare which the prince continues to chair.

Columnist Mohammed AlSaif, writing in the Arab News immediately after the election said: “Words such as freedom of choice, equality, human rights, rational thinking, democracy and elections, are terms we came to view with high concern and suspicion. We treat them as alien ideas that are trying to sneak within our society from the outside world. But last week an amazing and irregular event took place, in one of our sporting landmarks. The members of the General Assembly of the Saudi Arabian Football Federation (SAFF) have elected through popular voting, their first president … Saudis were witnessing for the very first time in their lives a government official being elected through what they used to consider as a western ballot system.”

As part of the kingdom’s first five-year national sports plan that is being drafted albeit for men only, Prince Nawaf’s youth welfare presidency is proposing to privatize Saudi soccer clubs, use the proceeds to improve the country’s infrastructure and restructure its league with the English Premier League as its model. The new league would be able to increase revenues from broadcast rights – a commercial undertaking which is still in its infancy in the Middle East and North Africa and has so far benefitted state-owned broadcasters like Qatar’s Al Jazeera and Abu Dhabi Television that have deeper pockets than their private sector competitors.

"We are not only trying to make money, the aim of what we are trying to do is raise the level of sports in Saudi and in order to do so I think you need to have healthy club financials so they can afford to bring the best coaches, the best foreign players. And when you raise the level of Saudi clubs, you raise the level of the national team," said Prince Abdullah bin Mosaad bin Abdulaziz Al Saud, who heads the committee planning the restructuring, in an interview with The Wall Street Journal.

James M. Dorsey is a senior fellow at the S. Rajaratnam School of International Studies, director of the University of Würzburg’s Institute of Fan Culture, and the author of The Turbulent World of Middle East Soccer blog
Qatar Saudi Arabia UAE World Cup 2022