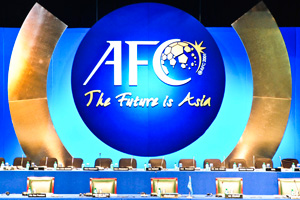 The Asian Football Confederation (AFC) has elected a prominent Bahraini soccer executive to complete the term of ousted president Mohammed Bin Hammam in a poll that has been marred by allegations of interference and controversy over the candidates’ track records.

Sheikh Salman Bin Ebrahim Al Khalifa, head of the Bahrain Football Association, also defeated his Qatari rival, Hassan al-Thawadi, secretary general of the Gulf state’s 2022 World Cup organizing committee, 28 to 18 in an election to fill Mr. Bin Hammam’s seat on the executive committee of world soccer body FIFA. The disgraced Qatari national was banned for life from involvement in soccer by FIFA because of multiple violations of its code of ethics.

Sheikh Salman’s sweeping of 33 of the 46 AFC member association votes in the presidential election and his FIFA nomination constitute a stunning success for himself following his narrow defeat by Mr. Bin Hammam in a 2009 election for the FIFA seat as well as for his main supporter, the Olympic Council of Asia (OCA) headed by former Kuwaiti government minister Sheikh Ahmad Al-Fahad Al-Ahmed Al-Sabah.

Sheikh Salman was the only candidate with no association with Mr. Bin Hammam and as a result the most likely to counter the significant influence the Qatari is still believed to wield in Asian soccer. . “The member of associations want to move on from the Mohammed Bin Hammam era,” a source close to the AFC said.
Sheikh Salman and Mr. Bin Hammam fought a bitter battle in 2009 for the FIFA executive committee seat and FIFA earlier this week warned AFC members of consorting with Mr. Bin Hammam who was accused by the OAC of campaigning on behalf of Mr. Al Serkal.

The Bahraini defeated Yousuf al Serkal of the United Arab Emirates, who unlike Sheikh Salman campaigned on a detailed platform that promised to address mismanagement of the AFC’s financial and commercial affairs revealed in an internal audit by PricewaterhouseCooper (PwC), and Thailand’s Worawi Makudi, who has successfully fended off past allegations of wrongdoing.

Mr. Al Serkal, who repeatedly denounced the OAC’s alleged interference in the election but has been silent on alleged campaigning by Mr. Bin Hammam on his behalf, garnered seven votes while Mr. Makudi won six. A fourth candidate, Hafez Ibrahim Al Medlej of Saudi Arabia, withdrew from the race on the eve of the election

Addressing the AFC Congress in Kuala Lumpur after his victory, Sheikh Salman promised change. "We need complete reforms, what we need is an AFC where decision makers are accountable. Clean up the past and turn the page for the future, restore transparency and integrity," he said in his most explicit remarks on the issue to date.

One litmus test of Sheikh Salman’s resolve will be whether he acts on the recommendations of the PwC report which include seeking legal counsel to ascertain whether the AFC can bring civil or criminal charges against Mr. Bin Hammam and whether it can renegotiate or cancel its controversial $1 billion master rights agreement with Singapore-based World Sport Group (WSG). WSG last year initiated legal proceedings against this reporter in a bid to gain disclosure of and intimidate sources and squash reporting.

Sources close to the AFC said Sheikh Salman would have to deliver. “He has no choice. The PwC report is one important test. His election could be a step forward. We’ll see what he does,” one source said. The sources said an ordinary AFC congress scheduled for Friday where he is expected to be pressed on the issue of reform would be Sheikh Salman’s first trial of fire.

The electoral results mirrors the balance of power in the Gulf where Bahrain and Kuwait are much more closely aligned with Saudi Arabia than Qatar that has been charting in foreign policy and projection of soft power a course of its own.

Sheikh Salman has been dogged by allegations that his office identified athletes, including players for the Bahrain nation soccer team, who were arrested for their participation in anti-government protests two years ago, tortured and charged. Sheikh Salman, a member of the Bahraini royal family, has refused to denounce the alleged abuses of human rights or to discuss the allegations against him. He has said that there was no reason to apologize to the players because it was an issue for politicians, not his soccer federation.

Bahraini human rights groups campaigned against his candidacy. Two of the players, brothers Mohammed and Alaa Hubail, accused Sheik Salman of abandoning them. They said they had received no apology or compensation from the Bahrain football association for the months of alleged mistreatment. “We are his responsibility and people like him should solve the problem, not ignore it. I have a lot of anger. I really miss playing in my team and for Bahrain,” Mohammed Hubail told The Associated Press.

A third player, Sayed Mohamed Adnan, speaking to Associated Press in a separate interview, said that "some people sadly want to end my career because of their belief that I am for this and against that. I love Bahrain. Playing in the national team of my country is a great honor. I would love to do it any time. I would do it without hesitation."

FIFA president Sepp Blatter described the Bahraini’s victory as “a historical day because it is a day of election, a day of election in your confederation that has been in a difficult situation during the past two years.” Acknowledging that Sheikh Salman would have limited time as he will only serve until 2015 when Mr. Bin Hammam’s term would have ended and new elections are due, Mr. Blatter added: “You have two more years to put your house in order."

James M. Dorsey is a senior fellow at the S. Rajaratnam School of International Studies, director of the University of Würzburg’s Institute of Fan Culture, and the author of The Turbulent World of Middle East Soccer blog