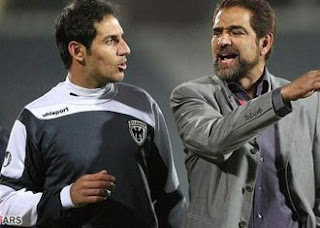 World soccer body FIFA’s newly established anti-racism committee has its work cut out for it in the Middle East and North Africa where ironically only Israel and Iran have taken some, albeit too few, steps to counter discrimination based on color, religion, ethnicity or sex.

In countering racism and discrimination in the Middle East, FIFA faces not only racist outbursts by fans, players and officials on the pitch but often a structure and unwritten policies that are inherently discriminatory.
In the latest incident of racism, Iran’s soccer federation this month banned Paykan FC coach Firouz Karimi for eight games and fined him $3,000 for calling Dutch player of African descent Sendley Sidney Bito a cannibal and a Negro and refusing to shake his hand.

“I only tried to express my respect toward Karimi. I offered him hand shake, but it seems he was angry with the result.” Mr. Bito told reporters referring to the defeat of Paykan which was last month relegated to the second division by his Fajr FC team. Karimi justified his refusal with the fact that Iranian culture dictates that the older person initiate a handshake.A video of the incident has gone viral on the Internet with fans organizing campaigns against racism despite a crackdown on access to the Web that makes it difficult for Iranians in the Islamic republic to access popular social media websites.

The sanctioning by the Iranian soccer federation is in stark contrast to it its turning a blind eye to regular denunciations as donkeys of players and supporters of Traktor Sazi FC, the club based in Tabriz, the capital of Iranian Azerbaijan, widely seen as a potent projection of Azeri ethnic and national identity. “Wherever Tractor goes, fans of the opposing club chant insulting slogans. They imitate the sound of donkeys, because Azerbaijanis are historically derided as stupid and stubborn. I remember incidents going back to the time that I was a teenager,” said a long-standing observer of Iranian soccer. The Iranian federation’s neglect is tied to the government’s crackdown on anything that reeks of separatism.

Similarly, a recent rejection of two Chechen Muslim players because of their religion by militant, racist supporters of Beitar Jerusalem, the only club in Israel to refuse Palestinian players, sparked outrage in Israel but little effort to force the club to put an end to its discriminatory hiring policies. The outrage was rooted in the militants’ use of Third Reich terminology by vowing to keep their club pure and by the fact that it countered a long-standing pillar of Israeli policy that seeks to forge close ties with its neighbors’ neighbors in the absence of relations with a majority of Arab states.

To be sure, the Israeli soccer federation, the only FIFA member in the region with a long-standing anti-racism campaign has repeatedly slapped Beitar, which has close ties with Prime Minister Benyamin Netanyahu’s Likud, on its fingers but has refrained from insisting that the club adhere to the country’s anti-discrimination laws. To the credit of Beitar owner Arcadi Gaydamak, the acquisition of the Chechens was in part designed to break the militants’ hold on the club and to pave the way for Palestinian players by first hiring non-Arab Muslim ones.

Similarly, Hany Ramzy, the coach of Egypt’s Olympic soccer team who is credited with Egypt’s winning of the 1998 Africa Cup of Nations championship, returned to Egypt from last year’s London games a soccer hero and a model in a country and a region in which identity politics rather national identity often governs the beautiful game. A Coptic Christian and one-time legendary national soccer team captain of a squad whose former national coach Hassan Shehata established Muslim piety as a criterion for membership equal to skill, Mr. Ramzy, symbolized what is possible as well as the immense problems Middle Eastern and North African nations have in coming to grips with their ethnic and religious minorities.

Mr. Ramzy is one of the few if not the only Coptic Egyptian national team player in past decades. He is the exception that proves the rule in a country in which the Coptic Church has its own Copts-only soccer teams. Mr. Ramzy is believed to owe his success to a significant extent to the fact that he earned prestige by being hired by various European teams, including Neuchâtel Xamax, Werder Bremen and Kaiserslautern.

“In Egypt, there is a problem that many people don't even consider. This problem relates to not allowing the Copts to play in the national teams of sports, especially soccer which is the most popular game in Egypt. Marginalization of young Copts by the Football Association and the administrations of Egyptian clubs resulted in having no Coptic players in the core teams. Youth teams have very few Copts and they are laid off as soon as they reach certain age and never take the chance to promote,” said Safwat Freeze Ghali, writing on the website of Copts United.

Charging that soccer discrimination against Copts encourages discrimination by Muslims and anger and hate among Copts, who account for some 10 per cent of all Egyptians, Mr. Ghali spoke out of personal experience.

“I suffered from this problem with my son who was born in 1995 and has a great talent in soccer. Many people have said so after they saw him playing. My son then started in a small club, but never took a chance to play. His coach treats him so badly and his colleagues make fun of his Christian name. His coach told him: I won't let you touch the ball (play in the team) and never ask me why! We got fed up and I took him to a bigger club and they liked him very much and promised to recruit him but they never did. Then, I moved him to another club where they liked him too, but when the coach knew his name (a Christian name), he said: We'll see, later!” Mr. Ghali wrote.

Journalist Mustafa Abdelhalim in an analysis published by Common Ground suggested that an interfaith soccer day on the eve of the London Olympics could serve as an example for Egypt and for that matter the rest of North Africa and the Middle East.  “In June 2012 London’s Wembley Stadium was the site of a ‘faith and football’ day that united students from Muslim, Christian and Jewish schools. This event was planned by the Three Faiths Forum (3FF), a UK-based organization dedicated to building relationships between people of all faiths, and the UK Football Association, which officially oversees the sport in the country. Egyptians could replicate this example by creating nationwide leagues to promote intergroup and interfaith cooperation. These teams could include anyone who wants to participate in the sport and make Egyptians’ shared interest in sports a tool for a more inclusive society,” Mr. Abdelhalim wrote

In Turkey, a predominantly Muslim nation with both a European and a Middle Eastern heritage, referee Halil Ibrahim Dincbag campaigns for gay rights. Mr. Dincbag took the Turkish soccer association to court for allegedly outing him by leaking that he had been exempted from military services on the grounds of homosexuality and then dismissing him despite the fact that Turkey has legally enshrined gay rights.

Mr. Dincdag’s decision not to go quietly is nevertheless no mean feat in a country rife with homophobia where spectators decry opposing players and referees whose decisions they dislike as faggots. Dincdag hails from Trabzon, a Black Sea city known for its legendary soccer club, its fanatical football fans and hot-tempered, explosive inhabitants who are quicker with a knife than with their wits. "I could have left the country, or disputed everything," Dincdag said. "But I knew the media wouldn't let it go. So I decided to tell the truth -- yes, I'm the gay ref you're looking for."

James M. Dorsey is a senior fellow at the S. Rajaratnam School of International Studies, director of the University of Würzburg’s Institute of Fan Culture, and the author of The Turbulent World of Middle East Soccer blog. Amir Khalinejad is a Tehran-based freelance journalist.