March 20, 2012
Al Dunya accuses FC Barcelona of aiding Syrian rebels
By James M. Dorsey
State-run Syrian Al Dunya television, in one of its more bizarre parroting of allegations of foreign intervention by embattled President Bashar al-Assad’s regime, has accused crowned traditionally left-wing leaning Spanish soccer club FC Barcelona of employing its tactical formations to deliver coded messages to armed Syrian rebels.
The television broadcast the allegation as fighters of the rebel Free Syrian Army retreated from the eastern Syrian city of Deir al-Zor following a fierce two day Syrian military assault in what activists said was an effort to spare residents further bloodshed. The retreat followed earlier rebel withdrawals from Homs and Idlib.
The withdrawals appear to signal a shift in rebel tactics from trying to hold on to territory in favour of a campaign of bombings and assassinations, particularly in the sensitive Syrian capital of Damascus.
Al Dunya charged that Barcelona’s tactical formations represented a map of routes from Lebanon to Syria used to smuggle weapons to the Syrian rebels. It said projecting the map on a Barcelona Copa del Rey quarter final match against Real Madrid that players in the club’s formation on the soccer pitch were the equivalent of smugglers while the ball represented weapons as they were moved along the smuggling route.
Al Dunya asserted that midfielder Andres Iniesta operated at the beginning of a smuggling route while a late game pass by player of the year Lionel Messi constituted the successful handover of an arms shipment in Deir al-Zor at the end of the route. In Al Dunya’s apparently doctored version of the match a mysterious, unidentified player appears as Messi passes the ball. The shadowy player somehow ends up in the Real Madrid goal. Midfielder Sergio Busquets Burgos was also part of Barcelona’s international intrigue, Al Dunya said.
The report serves as further evidence of the callousness of the Assad regime and the degree to which Mr. Assad and his immediate family and aides appear to be cut off from reality – a portrait that also emerges from Assad family emails disclosed earlier this month by The Guardian which detail the president’s purchases on ITunes and his wife’s acquisition of luxury goods at the same time that his forces push on with their brutal year-old crackdown on anti-government protesters.
Al Dunya’s assertions are likely to be an attempt at scoring public relations points against Qatar, the Arab nation that together with Saudi Arabia has taken the lead in denouncing the Assad regime, seeking to isolate it in the Middle East as well as internationally and calling for support for the country’s armed resistance. Barcelona signed its first ever commercial shirt sponsorship agreement worth $200 million in December 2010 with the Qatar Foundation, a state-owned charity.
The Al Dunya report was posted on YouTube and has been viewed by almost half a million people.
Al Dunya charged that the Qatar-owned Al Jazeera television network was repeatedly broadcasting clips from the Barcelona match in a bid to weaken the Assad regime. Al Dunya earlier this month charged that Al Jazeera sports newscaster had incited listeners against the Assad regime during his coverage of a match between Syria and Bahrain in London.
Syria has repeatedly over the past year accused Al Jazeera and other foreign media from being in bed with anti-government forces. Syria has barred all foreign media from reporting from the country and has tightly controlled the movements of the few journalists granted entry.
Syria’s invocation of soccer as part of the international conspiracy it alleges that it is battling underscores the important role of soccer in Middle Eastern and North African politics.
Syria’s national soccer teams flagrantly set rules aside in recent months in their line-ups to ensure success on the pitch in a bid to demonstrate that Mr. Assad’s regime is in control and can perform despite the violence and turmoil and the hope that success on the soccer pitch would rub off on the regime.
World soccer body FIFA last September barred Syria from competing for the 2014 World Cup in Brazil after the country’s national team fielded an ineligible player in in a qualifying match against Tajikistan. Lebanon has accused Syria in November of fielding six players in an Under-19 Asian Football Championship qualifier whose ages had been falsified to qualify them for the team.
By the same token, Syria refused to send athletes to last November’s Arab Games because it feared embarrassment if some of its sportsmen defected.
That fear may not have been unfounded. Abdelbasset Saroot, who was targeted by pro-Assad forces and is believed to be in hiding since the Syrian military recently entered the rebel stronghold of Homs, symbolizes the regime’s problems with its youth soccer team. 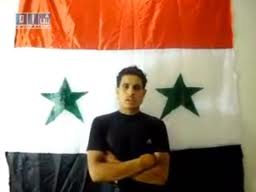 A 20-year old goalkeeper for Syria's national Under-23 team, Mr. Saroot is a leader of the revolt in Homs. “They are really targeting me. They really want to get me. They want to kill me. But God is giving me life. The more death and destruction we face, the higher our optimism and spirit. We are not sad that our martyrs are dead but we miss them as revolutionaries” Mr. Saroot says in an Al Jazeera documentary.
The documentary pictures Mr. Saroot standing on a podium leading protesters with a chant:
“My homeland is Syria
Those who want to challenge this revolution are not up to the task
We want to hang Bashar and crush this tyranny,” he sings.
James M. Dorsey is a senior fellow at the S. Rajaratnam School of International Studies at Nanyang Technological University in Singapore and the author of the blog, The Turbulent World of Middle East Soccer.
FIFA Syria World Cup 2014