Bahrain’s 10:0 against Indonesia puts both nations in the political hot seat 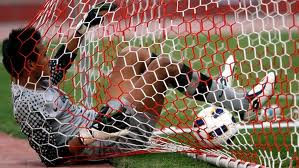 A suspicious outcome with political implications (Source: The Daily Telegraph)
By James M. Dorsey
Bahrain’s stunning 10:0 thrashing this week of Indonesia in a World Cup qualifier threatens to damage the campaign of the country’s football czar, Sheikh Salman bin Ebrahim Al Khalifa, to be elected head of the Asian Football Confederation (AFC), and has put the careers of prominent soccer managers and executives in the firing line as world soccer body FIFA investigates possible match fixing.
The investigation kick starts former German police chief and Interpol director Ralf Mutschke’s new job as FIFA security chief, which includes the fight against corruption and match-fixing.
FIFA described the Bahraini victory which failed to ensure that the Gulf state advances to the fourth and final Asian qualifying round for the 2014 World Cup as “unusual.”
In addition to having to make up for a nine-goal deficit, which it did with its defeat of Indonesia, Bahrain also needed Qatar to lose its last match. But by scoring an 83rd-minute equalizer to draw 2-2 with Iran, Qatar ensured that it rather than Bahrain would advance to the final round.
All in all, Indonesia has lost all five of its previous group matches, conceding 16 goals while scoring just three.
FIFA, in a bid to appear impartial and not further tarnish Bahrain Football Association (BFA) president Sheikh Salman’s election campaign, described its investigation as “routine,” adding that the probe was justified "given the unusual outcome against results expectation and head-to-head history, and in the interests of maintaining unequivocal confidence in our game."
The allegation of match-fixing adds another layer of controversy to Sheikh Salman’s campaign given his backing last year of the arrest, torture and/or firing of 150 athletes and sports officials, including several national soccer team players on charges of involvement in anti-government protests.
Speaking in London, FIFA vice president Prince Ali Bin Al Hussein said the outcome of the Bahrain-Indonesia match “might just be a coincidence, however there might be something behind it." Prince Ali, a proponent for greater transparency within FIFA, noted that match fixers were often “a step ahead” of those seeking to safeguard the integrity of the beautiful game. "We will have to see what the investigation comes out with,” he said.
The AFC said in a statement that it supported the FIFA probe and would "cooperate closely with the world football governing body in the investigation."
Bahrain’s English coach Peter Taylor is likely to move into the fire line if it emerges that the match against Indonesia was fixed. Mr. Taylor was criticized last year for taking up the job in a country where several national team players were banned and mistreated as part of the 150 sports people penalized for demonstrating against the government. Mr. Taylor somewhat callously at the time justified accepting the job by saying: "I am just a football manager. Since I've been here there have been more problems in England than there have been in Bahrain."
Bahrain has historically had close games with Indonesia, having won two, drawn two and lost two prior to Wednesday's game. Bahrain had scored nine goals in those matches and conceded seven.
Indonesia was disadvantaged during the match after its goalkeeper, Samsidar with a red card just two minutes into the game and because it was fielding several inexperienced international players after suspending others who play for clubs in the breakaway Indonesian Super League.
As a result, it is hardly surprising that the probe shines the spotlight on the Indonesian football association (PSSI), which like Indonesia itself has been wracked by corruption. PSSI chairman Djohar Arifin Husin added fuel to the fire when he was quoted by Indonesian news website Inilah.com on his way back to Jakarta from Bahrain as charging that the national team could “no longer depend on the senior players. They are all mafia who have been contaminated with the way previous PSSI officials ran football, fixing matches as they see fit.”
Amid denunciations by former players, Mr. Husin has since denied making the remark and accused Inilah.com of defaming him.
Mr. Husin nonetheless appeared to leave the door open to possible foul play charging that controversial Lebanese referee Andre El Haddad had made “lots of questionable calls…., so that should be investigated.”
Mr. El Haddad last year took charge of a qualifier between China and Singapore that saw him make several hotly contested decisions. China won 2-1.
James M. Dorsey is a senior fellow at the S. Rajaratnam School of International Studies at Nanyang Technological University in Singapore and the author of the blog, The Turbulent World of Middle East Soccer.
Bahrain FIFA Indonesia