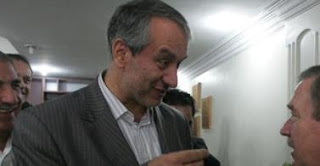 Ali Kafashian: From government supporter to Ahmadinejad challenger
By James M. Dorsey
An effort by the Iranian government to force the resignation of recently re-elected Iranian Football Federation (IFF) president Ali Kafashian constitutes the second time in as many months that a Middle Eastern government defies world soccer body FIFA’s ban on political interference in the beautiful game.
It also spotlights FIFA’s systematic failure to impose governance on its members in the Middle East and North Africa, a part of the world where soccer has over the years become a political battlefield. As a result, governments openly flaunt FIFA’s authority.
Iranian president Mahmoud Ahmadinejad, a soccer fan who micro manages affairs of the Iranian federation in a failed bid to bolster his popularity, is using the judiciary in a blatant effort to nullify Mr. Kafashian’s re-election.
In a law suit, the attorney general asserted that Mr. Kafashian’s re-election is illegal because he is banned from holding public office as a retired public employee. The attorney general has further threatened to prosecute members of the IFF executive committee who voted in favour of Mr. Kafashian.
The state-owned Fars news agency reported that iran’s recently created sports ministry is pressuring Mr. Kafashian to resign so that it can get a government approved candidate elected.
In a separate report, Fars highlighted the importance of sports to the government in a report about support by prominent sportsmen including former national soccer team players Alireza Mansourian and Hassan Roshan, Teheran’s Esteghlal FC soccer academy chairman Faramarz Khodnegah and national body building federation deputy head Seyed Hassan Afzali for a global march to Jerusalem to demand an end to Israeli occupation.
Ironically, Mr. Kafashian’s retirement was not a legal issue when he was first elected four years ago with Mr. Ahmadinejad’s backing. Nor did FIFA complain about Mr. Ahmadinejad’s political meddling to secure Mr. Kafashian’s 2008 election two years after it had briefly suspended Iran for interference in IFF polling.
Mr. Ahmadinejad turned this year on Mr. Kafashian because the IFF president had failed to ensure that soccer would boost the Iranian leader’s tarnished image. On the contrary, Iranian soccer has gone from bad to worse under Mr. Kafashian’s leadership.
Mr. Kafashian defeat of Mr. Ahmadinejad’s manipulation in early March came in the same week that the Iranian president’s conservative opponents triumphed in parliamentary elections. The legal proceedings highlight the importance Mr. Ahmadinejad attributes to control of the soccer federation, particularly against the backdrop of his parliamentary setback. Mr. Ahmadinejad became this week the first Iranian president since the Islamic revolution 33 years ago to be forced to justify his performance to parliament.
A diplomatic cable from the US embassy in Tehran leaked by Wikileaks asserts that Mr. Amadinejad’s interest in soccer as a political tool has had limited success. The cable reported that he pressured the IFF to lift its 2008 suspension of star Ali Karimi so that he could play in 2010 World Cup qualifiers, engineered the 2009 firing of Ali Daei as coach, and ensured that Mr Daei’s successor Mohamed Mayeli-Kohan lasted all of two weeks in the job so that his preferred candidate could be appointed.
Mr. Ahmedinejad has justified his interference telling Iranian journalists that “unfortunately, this sport has been afflicted with some very bad issues. I must intervene personally to push aside these destructive issues.”
Mr. Ahmadinejad’s blatant meddling in this month’s IFF election constitutes the second time in as many months that a Middle Eastern government openly flaunts FIFA rules to benefit politically from the beautiful game. It highlights FIFA’s increasing lack of credibility in the region.
FIFA president Sepp Blatter last month unsuccessfully demanded that the board of the Egyptian Football Association (EFA), appointees of ousted president Hosni Mubarak, be reinstated after it was summarily dismissed by the government in the wake of the death of 74 militant soccer fans in the Suez Canal town of Port Said in the worst sporting violence in Egyptian history.
The government ignored Mr. Blatter’s demand and outmanoeuvred the FIFA president by ensuing that the board after its official dismissal announced its resignation without acknowledging that it was at the behest of the government.
Mr. Blatter’s failed effort put the world soccer body at odds with Egyptian fans and clubs who had been campaigning for the last year for the resignation of the EFA board. It also contrasted starkly with FIFA’s failure for years to protest against the Mubarak regime’s political interference.
FIFA has been similarly lax in imposing adherence to FIFA criteria in the Egyptian premier league, a majority of whose members would be disqualified if the soccer body’s rules were applied. The same is true for the top Iranian league.
The comparison between Egypt and Iran doesn’t stop there nor does the risk of FIFA finding itself on the wrong side of history.
One reason Mr. Ahamdinejad turned against Mr. Kafashian is the fact that the soccer pitch on Mr. Kafashian’s watch has repeatedly in Tehran and Tabriz, the capital of East Azerbaijan, turned into a venue for protest against the Iranian president’s government. The soccer pitch was an important incubator of the revolt that toppled Mr. Mubarak.
The IFF president is also the fall guy for the failure of successive national coaches to deliver performance even though Mr. Ahmadinejad took a direct interest in their appointment. The coaches failed to take Iran to World Cup finals or triumph in Asian Cups, dashing Mr. Ahmadinejad’s hopes that the national team’s resulting prestige would rub off on him. Iran still stands a chance for qualifying for the 2014 Brazil World Cup.
James M. Dorsey is a senior fellow at the S. Rajaratnam School of International Studies at Nanyang Technological University in Singapore and the author of the blog, The Turbulent World of Middle East Soccer.
Egypt FIFA Iran Port Said