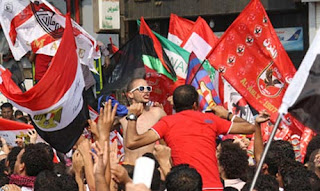 Al Ahly ultras demand justice for Port Said (Source: Al Ahram)
By James M. Dorsey
In a show of unity in the wake of last month’s death of 74 soccer fans in a lethal brawl in Port Said, militant support groups of crowned Cairo arch rivals Al Ahly SC and Al Zamalek SC have warned Egypt’s military rulers that they would sacrifice their lives to ensure that the instigators of the worst incident in Egyptian sporting history are swiftly brought to justice. They also warned that they would resist a crackdown on militant soccer groups.
Coming from Zamalek’s Ultras White Knights (UWK) and Ultras Ahlawy – militant, well-organized, highly politicized, street battled-hardened soccer fan groups modelled on similar organizations in Serbia and Italy – who played a key role in last year’s overthrow of president Hosni Mubarak these are not empty threats.
The statement at the end of a historic meeting between the two groups who have bitterly fought each other since their inception in 2007 suggests a sea change in Egypt’s soccer politics.
The arch rivals, whose differences are rooted in the contentious politics of British-ruled
Egypt that led to their clubs’ founding more than a century ago, temporarily set their differences aside early last year to jointly confront security forces and Mubarak loyalists on Cairo’s Tahrir Square. They have since the toppling of the president stood should-to-shoulder in vicious street battles with law enforcement forces associated with the interior ministry in a bid to force the military to hand over power to a civilian government and return to its barracks.
The ultras accuse the government and security forces of having at the least enabled if not encouraging  last month’s clash in the Port Said stadium after a match between the Suez Canal town’s Al Masri SC and Al Ahly to punish the Cairo ultras for emerging as the most militant opponents to military rule.
Zamalek last month released an album of songs dedicated to those that had died in the overthrow of Mr. Mubarak and were killed in the battles since then.
The Sun of Freedom
Preliminary results of a parliamentary investigation of the Port Said incident blamed fans and lax security for the incident and suggested that unidentified thugs had been involved in the violence, fueling reports that the violence had been planned rather than spontaneous.
"We demand full transparency in revealing the outcome of the investigations. We will neither accept disregarding the disaster and turning it into football riots nor making a scapegoat to protect those who orchestrated the attacks," the ultras said in their joint statement released after their first ever public gathering.
The ultras warned further that they would reject “wrongful accusations against anyone because he just belongs to the Ultras groups” as well as efforts to suppress their groups. They also cautioned that they would “not allow any football activities to resume unless complete justice is done."
Respected for their fearlessness and their years of standing up to the security forces, the ultras said they were” ready to sacrifice our lives for the sake of our country."
State-owned Al Ahram newspaper last month described the ultras as “a time bomb ticking due to lack of justice for fallen comrades following the Port Said disaster.”
Al Ahly (The National), like Zamalek one of Africa’s most crowned clubs traces its roots to opposition to the government to when it was founded more than a century ago as a meeting place of opponents of the British colonial administration and the monarchy. Its players still wear the red colors of the pre-colonial Egyptian flag.
Dressed in white, Zamalek, which first was named Al Mohtalet or The Mix and then Farouk in honor of the than hated and later deposed Egyptian monarch, was established as the club of the British colonial administrators, their Egyptian allies and the monarchists.
Those differences have long faded with the overthrow of the monarchy 60 years ago and no longer reflect the demography of the two clubs’ fan base. The rivalry nonetheless persisted with Cairo residents defining themselves until the toppling of Mr. Mubarak as either Zamalek or Ahlawy.
The ultras issued their statement as the Egyptian Football Association (EFA), acting on instructions of the interior ministry, cancelled mid-season this season's league in the wake of Port Said. The cancellation was apparently designed to further isolate the militants and signalled the military’s refusal to hold the police and security forces to their responsibility to maintain law and order. . It came as registration started for candidates for Egypt’s first post-Mubarak presidential election in May.
The EFA said on Tuesday that it had yet to decide whether to go ahead with a plan to hold a tournament of friendlies behind closed doors later this month in commemoration of those who lost their lives in Port Said.
James M. Dorsey is a Senior Fellow at the S. Rajaratnam School of International Studies (RSIS), Nanyang Technological University and the author of the blog, The Turbulent World of Middle East Soccer
Al Ahly (Egypt) Al Zamalek EFA Egypt Ultras