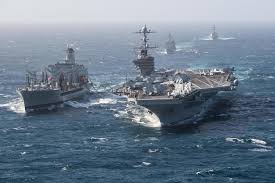 The arrival of the USS John C. Stennis aircraft carrier group in the Gulf to deter Iran from further testing ballistic missiles is likely to dampen Indian hopes that the Trump administration’s exemption of the port of Chabahar from sanctions against the Islamic republic would help it tighten economic relations with Central Asia and further regional integration.

The group’s presence in the Gulf, the first by a US aircraft carrier in eight months, came amid mounting tension between the United States and Iran following the Trump administration’s withdrawal from the 2015 international agreement that curbed Iran’s nuclear program and the imposition of harsh sanctions against the Islamic republic. It raised the spectre of a potential military conflagration.

The deployment for a period of two months coincided with a suicide attack on a Revolutionary Guards headquarters in Chabahar that killed two people and wounded 40 others.

Saudi and Iranian media reported that Ansar al-Furqan, a shadowy Iranian Sunni jihadi group that Iran claims is supported by the kingdom as well as the United States and Israel, had claimed responsibility for the attack.

Saudi pan-Arab daily Asharq Al-Awsat asserted that the attack “reflects the anger harboured by the (city’s Baloch) minority against the government.” The paper said the Iranian government had expelled thousands of Baloch families from Chabahar and replaced them with Persians in a bid to change its demography. It asserted that Iran was granting nationality to Afghan Shiites who had fought in Syria and Iraq and was moving them to Chabahar.

The paper went on to say that “anti-regime Baloch movements have recently intensified their operations against Tehran in an attempt to deter it from carrying out its plan to expel and marginalize the Baloch from their ancestral regions.”

Saudi Arabia, a staunch supporter of the US’s confrontational approach towards Iran, has pumped large amounts of money into militant, ultraconservative Sunni Muslim anti-Shiite and anti-Iranian religious seminaries along the border between the Pakistani province of Balochistan and the Iranian province of Sistan and Baluchistan that is home to Chabahar, according to militants.

The funding was designed to create the building blocks for a potential covert effort to destabilize Iran by stirring unrest among its ethnic minorities.

The deployment was, according to US officials in response to Iran’s test-firing of a ballistic missile capable of carrying multiple warheads. The US sanctions are in part designed to force Iran to drop its development of ballistic missiles. Iranian officials insist the missiles program is defensive in nature.

“We are accumulating risk of escalation in the region if we fail to restore deterrence,” said US Secretary of State Mike Pompeo.

The spectre of increased military tension in the Gulf with the arrival of the aircraft carrier group and of potentially Saudi and US-backed political violence in Iran, and a troubling security situation in Afghanistan threatened to diminish the impact of Washington’s granting Indian investment in Chabahar an exemption from its economic sanctions against Iran.

Indian and Iranian officials fear that the United States’ stepped up military posture and heightened tensions could undermine their efforts to turn Chabahar, which sits at the top of the Arabian Sea, into a hub for trade between India and Central Asia rendering the US waiver worthless.

The officials have their hopes pinned on efforts to engineer a peace process in Afghanistan. US special envoy Zalmay Khalilzad alongside representatives of the UAE, Saudi Arabia and Pakistan met this week with the Taliban. The talks are intended to negotiate an end to Afghanistan’s 17-year old war.

An Afghan government delegation, in what diplomats saw as a sign of progress, hovered in the corridors but did not take part in the meeting because of the Taliban’s insistence that it will only talk to the United States. Talks with the Taliban have so far stalled because of the group’s insistence on a timetable for the withdrawal of all foreign troops from Afghanistan.

US officials said the aircraft carrier group, beyond seeking to deter Iran, would also support the US war effort in Afghanistan where the United States has ramped up airstrikes in an effort to press the Taliban into peace talks.

The talks were an opportunity, particularly for Saudi Arabia, whose utility as an ally is being questioned by the US Congress in the wake of the October 2 killing of journalist Jamal Khashoggi in the Saudi consulate in Istanbul, and Pakistan, which the United States accuses of supporting the Taliban, to demonstrate their utility.

US President Donald J. Trump asked Pakistani prime minister Imran Khan in a letter earlier this month to help bring the Taliban to the negotiating table.

While Saudi Arabia and Pakistan have an interest in using their close ties to the Taliban to help forge an end to the Afghan war, its not immediately clear that they want to see reduced tensions facilitate the emergence of Chabahar as an Indian-backed hub.

A Saudi think tank, the Arabian Gulf Centre for Iranian Studies (AGCIS) renamed the International Institute of Iranian Studies that is believed to be backed by Saudi crown prince Mohammed bin Salman, argued in a study last year that Chabahar posed “a direct threat to the Arab Gulf states” that called for “immediate counter measures.”

Written by Mohammed Hassan Husseinbor, identified as an Iranian political researcher, the study warned that Chabahar posed a threat because it would enable Iran to increase greater market share in India for its oil exports at the expense of Saudi Arabia, raise foreign investment in the Islamic republic, increase government revenues, and allow Iran to project power in the Gulf and the Indian Ocean.

Noting the vast expanses of Iran’s Sistan and Baluchestan province, Mr. Husseinbor went on to say that “it would be a formidable challenge, if not impossible, for the Iranian government to protect such long distances and secure Chabahar in the face of widespread Baluch opposition, particularly if this opposition is supported by Iran’s regional adversaries and world powers.”

Similarly, Pakistan is heavily invested in Gwadar, the Chinese-backed port in Balochistan that is a crown jewel of the US$45 billion plus China Pakistan Economic Corridor (CPEC), a pillar of the People’s Republic’s Belt and Road initiative. Gwadar is a mere 70 kilometres up the coast from Chabahar.

"Pakistan sees India as an existential threat and the idea of India being in any way present on Pakistan's western flank in Afghanistan will always raise alarm bells in Islamabad," said South Asia scholar Michael Kugelman.

If the arrival of the USS John C. Stennis aircraft carrier group in the Gulf heralds heightened tension, Pakistan may have less reason to worry.