Turning Qatar into an Island: Saudi cuts off its nose to spite its face 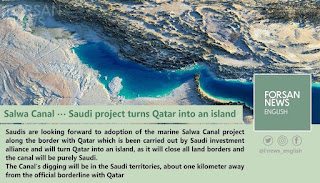 There’s a cutting-off-the-nose-to-spite-the face aspect to a Saudi plan to turn Qatar into an island by digging a 60-kilometre ocean channel through the two countries’ land border that would accommodate a nuclear waste heap as well as a military base.

If implemented, the channel would signal the kingdom’s belief that relations between the world’s only two Wahhabi states will not any time soon return to the projection of Gulf brotherhood that was the dominant theme prior to the United Arab Emirates-Saudi-led imposition in June of last year of a diplomatic and economic boycott of Qatar.

It would also suggest that chances are minimal that the six-nation Gulf Cooperation Council (GCC) that groups Oman, Kuwait and Bahrain alongside Qatar, Saudi Arabia and the UAE would revert to its role as a regional integrative body. So do unconfirmed reports that the UAE plans to follow in the kingdom’s footstep and build a nuclear waste site of its own at the closest point to its border with Qatar.

UAE Minister of State for Foreign Affairs Anwar Gargash appeared to confirm the Saudi plan, gloating on Twitter that Qatari “silence on the canal project is proof of their fear and confusion.”

The message that notions of Gulf brotherhood are shallow at best is one that will be heard not only in Doha, but also in other capitals in the region. The 200-metre wide, 20-metre deep channel would erase a border that has been closed since the imposition of the boycott and was unlikely to re-open any time soon.

Built a kilometre from the Qatari border, the channel would be able to accommodate merchant and passenger ships of up to 295 metres long and 33 metres wide, with a maximum draught of 12 metres. Adding insult to injury, the nuclear waste dump and military base would be on the side of the channel that touches the Qatari border and would effectively constitute a Saudi outpost on the newly created island.

The plan, to be funded by private Saudi and Emirati investors and executed by Egyptian firms that helped broaden the Suez Canal, also envisions the construction of five hotels, two ports and a free trade zone.

The $750 million project would have the dump ready for when Saudi Arabia inaugurates the first two of its 16 planned nuclear reactors in 2027. Saudi Arabia is reviewing proposals to build the reactors from US, Chinese, French, South Korean contractors and expects to award the projects in December.

The Saudis’ cutting-off-the-nose-to-spite-the-face aspect kicks in with the fact that the channel would not only destroy Qatar’s one land border and create a glaring symbol of regional division rather than integration.

It would also draw a dividing line between two interpretations of Wahhabism, an ultra-conservative Sunni Muslim worldview developed by Mohammed ibn Abdul Wahhab, an 18th century preacher, at a time that Crown Prince Mohammed bin Salman has vowed to return the kingdom to an unidentified moderate form of Islam.

Qatar’s more liberal Wahhabism of the sea contrasts starkly with the Wahhabism of the land that Prince Mohammed is seeking to reform. The crown prince made waves last year by lifting a ban on women’s driving, granting women the right to attend male sporting events in stadiums, and introducing modern forms of entertainment like, music, cinema and theatre – all long-standing fixtures of Qatari social life and of the ability to reform while maintaining autocratic rule.

As a result, the Saudi plan to physically separate the kingdom from Qatar cuts it off from the most logical model for Prince Mohammed’s plan to ween the kingdom off adherence to the most restrictive form of Wahhabism that has shaped Saudi history since the late 18th century and constituted the legitimizing basis for the creation of the modern Saudi state.

A traditional Gulf state and a Wahhabi state to boot, Qatari conservatism was everything but a mirror image of Saudi Arabia’s long-standing puritan way of life. Qatar did not have a powerful religious establishment like the one in Saudi Arabia that Prince Mohammed has recently whipped into subservience, nor did it implement absolute gender segregation.

Non-Muslims can practice their faith in their own houses of worship and were exempted from bans on alcohol and pork. Qatar became a sponsor of the arts and hosted the controversial state-owned Al Jazeera television network that revolutionized the region’s controlled media landscape and became one of the world’s foremost global English-language broadcasters.

Qatari conservatism is likely what Prince Mohammed would like to achieve even if that is something he is unlikely to acknowledge. His initial measures – lifting the ban on women’s driving and attending male sporting events; rolling back the powers of the Committee for the Promotion of Virtue and the Prevention of Vice or Mutaween, the religious police; and his introduction of long forbidden forms of modern entertainment – are in line with the conservatism of Qatar or for that matter the UAE, even if the Emirates do not share a Wahhabi heritage.

Qatar’s advantage has been that it projects the ability to change without completely dumping ultra-conservative religious precepts that have shaped culture and belief systems. It projects a vision, like the one Prince Mohammed is pursuing, of a less restrictive and less choking conservative Wahhabi society that grants individuals opportunities irrespective of gender.

“I consider myself a good Wahhabi and can still be modern, understanding Islam in an open way. We take into account the changes in the world,” Abdelhameed Al Ansari, the then dean of Qatar University’s College of Sharia, a leader of the paradigm shift, told The Wall Street Journal in 2002.

Without doubt, Prince Mohammed’s social, economic and religious reform drive constitutes recognition of changes needed to turn the kingdom into a cutting-edge 21st century country and ensure the survival of his family’s autocratic rule.

However, if built, the channel would suggest that geopolitical supremacy has replaced ultra-conservative, supremacist religious doctrine as a driver of the king-in-waiting’s policy. It’s a message that graphically projects division and polarization rather than regional cooperation and exploitation of synergies.
Dr. James M. Dorsey is a senior fellow at the S. Rajaratnam School of International Studies, co-director of the University of Würzburg’s Institute for Fan Culture, and co-host of the New Books in Middle Eastern Studies podcast. James is the author of The Turbulent World of Middle East Soccer blog, a book with the same title as well as Comparative Political Transitions between Southeast Asia and the Middle East and North Africa, co-authored with Dr. Teresita Cruz-Del Rosario,  Shifting Sands, Essays on Sports and Politics in the Middle East and North Africa, and the forthcoming China and the Middle East: Venturing into the Maelstrom