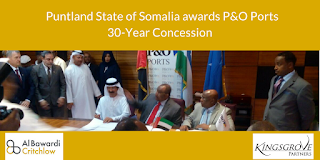 Twelve years later, with the Middle East fighting multiple battles and external powers jockeying for influence, those fears have proven justified despite the adoption in the wake of the sale of non-binding guidelines for sovereign funds that manage hundreds of billions of dollars.

Concern that an Arab state would post 9/11 gain control of some of the busiest terminals in US ports, including New York, Newark, Baltimore, Philadelphia, New Orleans and Miami, forced DP World to exclude P&O’s American assets from the deal.

The worries prompted the creation of a multilateral international working group chaired by a senior UAE financial official alongside an International Monetary Fund executive that in 2008 adopted the Santiago Principles designed to “ensure that the SWF undertakes investments without any intention or obligation to fulfil, directly or indirectly, any geopolitical agenda of the government.”

Enforcing adherence to the principles has proven easier said than done. With the UAE, whose 1.4 million citizens account for a mere 15 percent of its population of 10 million, projecting itself as a regional military power in the war in Yemen and through the establishment of foreign military bases, DP World has since the US debacle been acquiring ports rights globally, including in countries where the UAE military is active.

To be sure, DP World’s expansion in the Horn of Africa and the Gulf of Aden often makes economic sense and may well have been initially commercially driven in cases like the agreement in 2008 to operate for a period of 30 years the Yemeni port of Aden, once the British empire’s busiest port. The company lost its contract four years later because of its failure to invest in the port.

The port has since taken on even greater geopolitical significance with the UAE military’s focus on Aden and alleged backing for a secessionist movement in southern Yemen in the almost three-year-old Saudi-led military intervention in the country that has allowed DP World to again enter into negotiations about assisting in rebuilding Yemen’s maritime and trade sector that would likely include the company’s return to the Aden port.

DP World’s involvement in Aden tallies in geopolitical terms with its own as well as the UAE’s expansion elsewhere in the Horn of Africa. The company won two years ago a 30-year concession, with an automatic 10-year extension, for the management and development of a multi-purpose deep seaport in Berbera in the breakaway region of Somaliland.

Berbera faces South Yemen across the strategic Bab al Mandab Strait, past which some 4 million barrels of oil flow daily. The UAE military is training Somaliland forces and creating an air and naval facility to protect shipping.

DP World was also developing the port of Bosaso in Puntland, another Somali breakaway region, and was discussing involvement in a third Somali port in Barawe. The Somali ports compliment a UAE military base in Eritrea’s Assab as well as various facilities in Yemen.

“Money and politics make a combustible mix: If you don’t get the formula right, it can blow up in your face,” analysts Adam Ereli and Theodore Karasik warned in a recent Foreign Policy article about the role of sovereign wealth funds in relations between Russia and the Gulf.

In one instance, Kirill Dmitriev, a close associate of President Vladimir Putin and the head of Russia’s sovereign wealth fund, the Russian Direct Investment Fund (RDIF), met in early January 2017l in the Seychelles with Blackwater founder Erik Prince, a supporter of President Donald J. Trump and the brother of US Education Secretary Betsy DeVos in an effort to create a US-Russian back channel. The meeting, days before Mr. Trump’s inauguration, was arranged by UAE Crown Prince Mohammed bin Zayed.

The meeting occurred as UAE, Saudi and other Gulf sovereign funds as well as DP World earmarked $20 billion for investments in infrastructure, energy, transportation, and military production through RDIF as a way of strengthening relations with Russia. RDIF is one of several Russian entities sanctioned by the US Treasury.

“Even if allowances are made for sectorial and geographic diversification, the level of allocations to these markets is out of proportion to their size and viability,” Messrs. Ereli and Karasik said. In a separate article for The Jamestown Foundation, Mr. Karasik argued that “the Gulf states are using their economic strength to flex their political muscle, in order to invest in Russia at a time when Moscow’s embattled economy is struggling with low oil prices.”

Debate about the political role of sovereign wealth funds subsided with the adoption of the Santiago Principles. Those principles are currently being flaunted in an environment of greater economic nationalism, reduced US emphasis on transparency and democratic values, Russian and Chinese focus on economic benefit, and Gulf governments that have become more assertive in flexing their muscles and asserting themselves internationally.

Gulf sovereign wealth funds have learnt the lessons of DP World’s US experience and are likely to be more cautious in ensuring that potential future investments in the US do not challenge Mr. Trump’s America First principle as well as his emphasis on security. Elsewhere, they operate in an environment in which the Santiago Principles fall by the wayside and governments face little criticism of their use of sovereign wealth funds as geopolitical tools.

Dr. James M. Dorsey is a senior fellow at the S. Rajaratnam School of International Studies, co-director of the University of Würzburg’s Institute for Fan Culture, and co-host of the New Books in Middle Eastern Studies podcast. James is the author of The Turbulent World of Middle East Soccer blog, a book with the same title as well as Comparative Political Transitions between Southeast Asia and the Middle East and North Africa, co-authored with Dr. Teresita Cruz-Del Rosario and  Shifting Sands, Essays on Sports and Politics in the Middle East and North Africa.
Africa Eritrea Russia Saudi Arabia Somalia UAE