Saudi sports: The dark side of Crown Prince Mohammed’s reforms 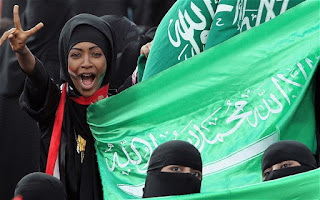 Saudi Crown Prince Mohammed bin Salman will be putting his best foot forward when enthusiastic women soccer fans this week attend for the first time a men’s soccer match in the kingdom.

The event symbolizes the social and economic changes Prince Mohammed is introducing in his effort to turn Saudi Arabia into a 21st century autocracy with an economy that produces badly needed jobs in and can compete in a post-oil world.

The match between Al Hilal and Al Ittihad in Riyadh’s King Fahd stadium is “a historic game, the first in which Saudi families can enter a stadium together... They are finally going to have activities and entertainment together where they’re not separated, where parents go with their kids and mothers and even grandmothers, where they can enjoy sports events specifically, together… I really think it reinforces family values,” said Lina Al-Maeena, a member of the kingdom’s Shura or Advisory Council, and director of Jeddah United, Saudi Arabia’s first women’s basketball team.

The event is certain to overshadow Prince Mohammed’s efforts to incorporate sports in his bid to concentrate power in his own hands and crack down on anyone who stands in his way.

An internationally acclaimed billionaire businessman with holdings in Western blue chips, Prince Alwaleed has emerged as the symbol of those who have so far refused to cut a monetary deal with the government and were recently moved from Riyadh’s posh Ritz Carlton Hotel to a high security prison in Riyadh.

In the latest incident, Prince Abdullah bin Saud bin Mohammed, the head of kingdom's Maritime Sports Federation, was sacked and replaced by a military officer. Prince Abdullah was the latest Saudi sports executive to be fired in an apparent violation of international sports governance that bans governments from interfering in the affairs of federations and clubs.

Prince Abdullah was reportedly relieved of his position after circulation of a six-minute audio tape on WhatsApp that challenged the government’s justification of last week’s arrest of 11 members of the ruling family, months after the initial purge.

In a country in which differences within the ruling family are seldom aired in public, Saudi Arabia's attorney general, Saud al-Mojeb, said the 11 had been arrested for staging a sit-in outside a palace and protesting a royal order to halt utility payments for family members. He said the princes were also seeking compensation for the 2016 execution of one of their cousins, Prince Turki bin Saud al-Kabir, who was convicted of murder.

In his audio tape, Prince Abdullah denounced Mr. Al-Mojeb’s assertion as “completely false” and “not believable.” He wondered how the princes could have had issues with utility bills, given that they “have great financial capabilities, far from concerns and financial problems, and were raised by their fathers to be obedient” to the king.

Prince Abdullah went on to praise King Salman and Prince Mohammed’s leadership and criticized “the attempts of some to create division and schism within the royal family.”

Prince Abdullah’s dismissal came a month after Turki Bin Abdul Mohsen Al-Asheikh, appointed by Prince Mohammed chairman of the General Sport Authority and effectively Saudi Arabia’s minister of sport, removed Prince Faisal bin Turki bin Nasser as head of Riyadh-based Al Nasser FC, one of the kingdom’s most popular soccer clubs. Prince Faisal was replaced by Salman al-Malik, a member of the board of the Saudi Arabian Football Association.

Prince Faisal is a son of Prince Turki bin Nasser, the honorary chairman of Al Nasser until 2016 and a former high-ranking military officer and fighter pilot who headed the Presidency of Meteorology and Environment.

Prince Turki was among the members of the ruling family caught up in Prince Mohammed’s purge. He was central to a controversial $56 billion arms deal with Britain that sparked a corruption investigation in 2004. The investigation was shut down in 2006 by then prime minister Tony Blair in 2006 under pressure from the Saudis.

Prince Mohammed has identified privatization of sports clubs, many of which are aligned with different members of the ruling families, as a key element in Vision 2030, his reform plan that includes development of sports as both a recreational and public health priority.

The limits of Prince Mohammed’s social liberalization were evident with an unidentified Saudi soccer player for Al-Nojoom FC facing legal charges for refusing a high five during a match and opting instead for dabbing, a dance craze, which involves a person tucking their head into the crook of their arm

Abdallah Al Shahani, a popular singer, actor, and TV host was arrested in August after a video clip of his dab went viral. The Saudi Interior Ministry's National Commission for Combating Drugs recently banned the dance because it allegedly referred to the use of marijuana.

The attendance of woman at a male sporting event constitutes no doubt a milestone that followed on the heels of the lifting of a ban on women’s driving. It is however, but the beginning in a country in which women remain subject to the will of their male guardians and whose reform process has yet to demonstrate that it involves adherence to the rule of law, checks and balances, and greater freedoms that are not curtailed by arbitrary and repressive policies.

Dr. James M. Dorsey is a senior fellow at the S. Rajaratnam School of International Studies, co-director of the University of Würzburg’s Institute for Fan Culture, and co-host of the New Books in Middle Eastern Studies podcast. James is the author of The Turbulent World of Middle East Soccer blog, a book with the same title as well as Comparative Political Transitions between Southeast Asia and the Middle East and North Africa, co-authored with Dr. Teresita Cruz-Del Rosario and  Shifting Sands, Essays on Sports and Politics in the Middle East and North Africa
Saudi Arabia Women