The Gulf crisis: Fighting it out down and dirty 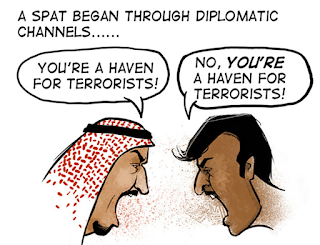 In the three-month old Gulf crisis, nothing is too expensive or too down and dirty when it comes to buying influence, garnering soft power, and trying to win hearts and minds.

It is a battle fought primarily by the United Arab Emirates and Qatar, the Gulf’s two megalomaniac states, on European soccer pitches, in the board rooms of Western think tanks and universities, and in the media. Character assignation is fair game.

Qatar and the UAE stunned European soccer as the window closed this week for the buying and selling of players by driving prices through the roof and calling into question European soccer body UEFA’s Financial Fair Play rules.

Qatar-owned French club Paris Saint-Germain (PSG) spent $476 million on two players: FC Barcelona’s Neymar and Monaco’s Kylian Sanmi Mbappé. No mean feat for a country of 300,000 citizens locked into an existential battle with a UAE-Saudi led alliance of African and Indian Ocean surrogates that seeks through a diplomatic and economic boycott to impose its will on Qatar. Expenditure of $203 million by Abu Dhabi-owned Manchester City was similarly stratospheric, but paled in comparison.

The Qatari-UAE competition for jaw-dropping headlines is however about far more than trophy acquisitions and performance on the soccer pitch. By driving the price of soccer players into the stratosphere, Qatar was showing a finger to its Gulf detractors, saying it could shake off their boycott like it would swat a fly. That is priceless in an environment in which the UAE-Saudi-led alliance has failed to garner widespread support for its boycott in both the Muslim world and the broader international community.

It is also priceless in an environment in which Qatar and the UAE have been spending beyond sports humongous amounts on influencing research at influential think tanks and prestigious Western universities, some of whom have been lured to establish lucrative campuses in Doha and Abu Dhabi at the expense of compromising principles of academic freedom and freedom of expression.

It is also priceless as the two countries spend on hackers that in the case of the UAE created the pretext for the Gulf crisis and in the case of Qatar targeted the UAE with embarrassing disclosures.

That is no truer than by leaking not only emails from the account of Yousef al-Otaiba, the influential UAE ambassador to Washington, that are designed to chart the extent of his efforts to shape US policy and public perception, but also details of his private life that amount to an attempt at character assassination.

Although aware for months of the salacious emails distributed by a mysterious group that identifies itself as Global Leaks and uses a Russian-registered email address, this reporter has refrained from publishing materials that are not material to the power struggle between the Gulf states. The salacious mails were finally published this week by The Intercept. While there is no formal link between the leaks and Qatar, there is little doubt that they serve the Gulf state in its battle with the UAE.

Qatar has scored points with the leaks and the record-breaking soccer acquisitions. It has benefitted from the fact that while most Muslim and non-Muslim countries have shied away from taking sides in the Gulf crisis, their calls for a negotiated end to the solution in effect is more aligned with the Qatari position than that of the alliance that demands Qatar’s unconditional acceptance of its demands.

For Qatar, the soccer acquisitions are part of a far broader soft power strategy that in many ways might be the most strategic and thought through approach in the Gulf. It envisions sports as much as a pillar of national identity as it is a key leg of its effort to amass soft power. The 2022 World Cup the strategy’s crown jewel.

Yet, the strategy has produced only mixed results. Performance on the pitch has not offered the Qatari government the kind of success that various other Arab autocrats have been able to exploit in their bid to boost their image. Qatar is the first World Cup host in almost a century not to qualify for the World Cup on its own merit.

In the most recent example of political exploitation of the beautiful game, Saudi Crown Prince Mohammed bin Salam this weekend sought to curry popular favour by declaring that attendance of this week’s World Cup qualifier against Japan would be free. The match will decide whether the kingdom qualifies for next year’s World Cup in Russia. Prince Mohammed’s gesture came days after the UAE defeated the Saudis in another World Cup qualifier that put Saudi participation in the World Cup at risk.

Prince Mohammed enjoys significant popularity in the expectation that his push for economic reform and a limited degree of greater social and cultural freedom will create jobs and cater to the aspiration of soccer-crazy Saudis, a majority of whom are under the age of 30. Gestures like free attendance of a match serve to manage expectations that have yet to be met.

Qatar, to its surprise, found that rather than being celebrated for its achievement as a small country in becoming the first Arab country ever to host a World Cup, it was mired in controversy over the integrity of its bid and pilloried for the living and working conditions of migrant workers, who constitute a majority of the Gulf state’s population. Instead of putting Qatar on a pedestal, winning the World Cup put it in the firing line with a wave of criticism of its kafala or labour sponsorship system labour regime that is not uniquely Qatari, but common to the Gulf.

To its credit, Qatar has responded positively to the criticism and in stark contrast to other Gulf states engaged with its critics. A series of legal reforms have sought to address criticism of the system by streamlining rather than abolishing a scheme that puts workers at the mercy of their employers.

The degree to which Qatar may have succeeded in responding to its critics will be put to the test in November when the International Labour Organization (ILO) reviews the Gulf state’s reforms. The ILO last year warned that it would establish a Commission of Inquiry if Qatar failed to bring its regime in line with international standards.

Such commissions are among the ILO’s most powerful tools to ensure compliance with international treaties. The UN body has only established 13 such commissions in its century-long history. The last such commission was created in 2010 to force Zimbabwe to live up to its obligations.

At the bottom line, the limited benefit both Qatar and the UAE have reaped from massive investment in soft power and public diplomacy suggests that money alone does not buy autocracies empathy or legitimacy. For that, the images they attempt to project need to be backed up by policies at home and abroad that are aligned and bear witness to claims cleverly crafted by politicians, lobbyists, and public relations experts. Both Qatar and the UAE find that requirement to meet.

Dr. James M. Dorsey is a senior fellow at the S. Rajaratnam School of International Studies, co-director of the University of Würzburg’s Institute for Fan Culture, and the author of The Turbulent World of Middle East Soccer blog, a book with the same title, Comparative Political Transitions between Southeast Asia and the Middle East and North Africa, co-authored with Dr. Teresita Cruz-Del Rosario and four forthcoming books, Shifting Sands, Essays on Sports and Politics in the Middle East and North Africa as well as The Gulf Crisis: Small States Battle It Out, Creating Frankenstein: The Saudi Export of Ultra-conservatism and China and the Middle East: Venturing into the Maelstrom
Qatar Saudi Arabia UAE World Cup 2022