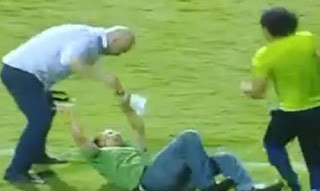 Port Said, the Suez Canal city associated with the worst incident in Egyptian sporting history, is emerging as a prime locus of soccer-driven protest in a country that does not brook dissent.

Repeated protests in the city are laden with soccer’s tangled involvement and key role in the 2011 popular revolt that toppled President Hosni Mubarak; subsequent opposition to the military regime that succeeded him; deep-seated polarization over the role of Islam in public life evoked by the 2012 election of Mohammed Morsi, a Muslim Brother and Egypt’s first and only democratically elected president; and the 2013 military coup that removed him from office.

In the latest incident, hundreds of supporters of Port Said’s Al Masri FC known as Green Eagles marched this week near the city’s Maryam Mosque in protest against the detention of their coach, Hossam Hassan, a legendary player and Egypt’s all-time top scorer. Local media reported that 30 protesters were arrested.

Mr. Ibrahim was accused of assaulting a policeman at the end of his club’s last match of the season. A video camera caught Mr. Hassan running after the policeman and punching him in the face. The policeman was reportedly a plainclothes photographer working for Egypt’s feared interior ministry. The Egyptian Football Association (EFA) penalized Mr. Hassan by suspending him for three matches and fining him $1,100.

The incident involves a twist of irony given that Mr. Hassan was a fervent supporter of Mr. Mubarak, who built the interior ministry and its police and security forces into a powerful, corrupt and feared force that is a law unto itself and became Egypt’s most despised institution.

Mr. Hassan, together with his twin brother, Ibrahim Hassan, an equally storied player, led demonstrations against the anti-Mubarak protesters in Cairo’s Tahrir Square in February 2011. Militant, street-battled hardened soccer fans were prominent in and played a key role in those protests. Messrs. Hassan urged Mr. Mubarak at the time to cut off food and medical supplies to the square.

Things have gone from bad to worse since Mr. Mubarak’s departure with repression of opposition having reached unprecedented levels under general-turned-president Abdel Fatah Al-Sisi, the military officer who toppled Mr. Morsi, outlawed the Muslim Brotherhood, and has arrested tens of thousands of his Islamist and non-Islamist critics.

“Hundreds of students, political activists and protesters, including children as young as 14, vanish without trace at the hands of the state… Many are held for months at a time and often kept blindfolded and handcuffed for the entire period,” the group said in a report.

Thousands of people led by Al Masri fans and members of parliament from Port Said marched through Port Said in February after Mr. Al-Sisi, in an unprecedented gesture to some of his opponents reached out to Ultras Ahlawy, Al Masri’s arch rival and the militant support group of storied Cairo club Al Ahli FC, once Mr. Hassan’s soccer home.

The gesture came as Al Ahli fans commemorated the death of 72 of their members in a politically loaded soccer brawl in Port Said’s stadium in February 2012. The fans were either beaten, stabbed or crushed to death in Egypt’s worst sporting incident by supporters of Al Masri and unidentified men believed to have been thugs who are regularly employed by the security forces.

The incident was widely seen as an attempt by the security forces and the military that got out of control to teach Ultras Ahlawy a lesson because of its prominent role in protests against Mr. Mubarak and his military successors. A Cairo court initially sentenced 21 lower class Al Masri fans to death in a case in which 73 people, including nine police officers were charged with being responsible for the incident. Egyptian stadiums have been closed to the public ever since.

The verdict sparked a popular revolt in Port Said and other Suez Canal cities. In appeal, the number of death sentences was reduced to 11. Some 40 people were killed during protests in January 2013 after the initial verdict outside Port Said prison where the convicted were being held.

This February the protesters were upset with Mr. Al-Sisi’s invitation to Ultras Ahlawy, made in a surprise phone call to a local television talk show, to name ten of its members who would be allowed to investigate the brawl. The ultras rejected the invitation, saying they could not act simultaneously as accuser and judge, and demanded that Mr. Al-Sisi allow for an independent investigation. Mr. Al-Sisi failed to respond.

Many in Port Said feel that their city has for decades been neglected by governments in Cairo and that it was being scapegoated in the wake of the soccer incident for what was in their view a manipulative move by authorities that went badly wrong. Port Said’s sense of being the government’s afterthought comes to life whenever Al Masri and Al Ahli lock horns on the soccer pitch.

Leila Zaki Chakravart, a London School of Economics scholar who spent 18 months in Port Said for research, recalled in an article in Open Democracy six weeks after the Port Said incident “how the coastal Mediterranean city’s self-styled laissez faire lifestyle of almost sleepy monotony abruptly changed gear on the day each year on which the Al-Masri/Al-Ahli fixture was scheduled. Tension rose rapidly before the event, and a self-imposed curfew descended ensuring that only the city’s male population patronised its streets and public spaces,” Ms. Chakravart wrote.

She noted that all Egyptian cities were soccer-mad but that “Port Said is a city which takes its football fervour to the extreme. Boys learn to dribble from the time they can walk, and street football games are played out as passionately as the city’s sole professional football club is supported. Even the club’s choice of name (Al Masri means The Egyptian) provides telling evidence of how the city’s distinctive regional brand of martial patriotism, forged during the (1956) Suez invasion and later wars with Israel, is concretely rooted in and expressed through the tribal loyalties which football brings out,” Ms Chakravart said.

It’s those tribal loyalties that are again sparking protest. The protests have as much to do with soccer as they have to do with fault lines in Egyptian society that have been sharpened in the five years since the downfall of Mr. Mubarak.

Egyptians have since watched as the Tahrir Square revolutionaries proved incapable of translating their initial victory into a sustainable transition, the military contributed to the impasse by focusing on retaining its decades-long grip on power and the perks that come with it, and the Muslim Brotherhood failed to successfully manoeuvre a minefield populated by ancien regime institutions seeking to salvage what could be salvaged and many ordinary people demanding economic improvement and political change.

Egyptians are left with Mr. Al-Sisi who appears to believe that brutal repression is the solution. Yet, even Mr. Al-Sisi appears to be groping for a way out of the malaise. His gesture to the ultras was a first attempt. Persistent reports of Mr. Al-Sisi and the Brotherhood feeling their way towards a potential reconciliation is another. The protests in Port Said suggest that for many a breaking of the impasse cannot come soon enough.

Dr. James M. Dorsey is a senior fellow at the S. Rajaratnam School of International Studies, co-director of the University of Würzburg’s Institute for Fan Culture, and the author of The Turbulent World of Middle East Soccer blog and a just published book with the same title.
Al Ahly (Egypt) Al Masri EFA Egypt Ultras