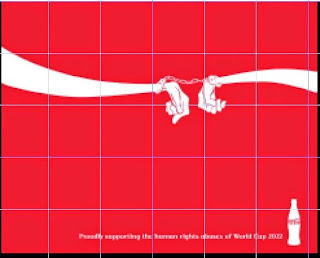 Widely viewed as a shrewd financial investor, Qatar’s return on investment in soft power designed to position it as a progressive ally of world powers in the hope that they will come to the aid of the wealthy Gulf state in times of emergency is proving to be abysmal.

Qatar has invested billions of dollars in the building blocks of soft power that range from the hosting of multiple sporting events, foremost among which the 2022 World Cup; glitzy, high profile real estate in Western capitals; acquisition of icons of Western economies; Western and Islamic art; and bold foreign policy initiatives designed to aid governments in hostage situations and with contacts that they were not able to initiate or manage themselves.

Yet, the payback in Qatar’s reputation, attitudes of law enforcement-related governmental agencies, non-governmental organizations, including trade unions and human rights groups and the public, and media headlines has been everything but congratulatory.

The portrait of Qatar that emerges from a review of responses and media coverage in the first five months of this year pictures a nation that treats migrant workers, the majority of its population, as sub humans; is increasingly becoming the target of audiences like soccer fans and the corporate sponsors of world soccer governing body FIFA that it hopes to charm; hosts a controversial, embattled global media operation that once was an unambiguously admired, exemplary member of the world press even though it still more often than not produces world class journalism; and maintains relations with dubious groups viewed as brutal and intrinsically hostile to the West.

There seems no end to the negative publicity Qatar generates, part of it the result, to be fair, of complex policy issues posed by the labour issue in a nation in which the citizenry accounts for a mere 12 percent of the population.

Much of it however is also due to a failure to take decisive steps that would convince its critics of its sincerity without being forced to tackle to most difficult and potentially existential issues associated with the labour problem. Qatar’s knockouts in the public relations ring are further the result of a disastrous communications policy to which it seems to be clinging despite the fact that it has contributed to Qatar’s defeats in the public affairs arena rather than to shaping a positive image for the Gulf state.

If anything, Qatar in recent months has been moving from bad to worse as it responds to crisis after crisis with tired pledges and clichés, reactions that further undermine whatever credibility it has left, and with actions, including a crackdown on the very critics with whom it engaged in a bid to curry favour and benefit from advice proffered.

A look at the last two month says it all. Amnesty International titled its evaluation of the implementation of four years of Qatari promises to improve the living and working conditions of migrant workers in advance of the World Cup, ‘Promising Little, Delivering Less.’

As if to drive the point home, it was not Qatari aid to the victims of two devastating earthquakes in Nepal that made headlines but the refusal of contractors working on World Cup-related projects to grant Nepalese labourers compassion leave to return home to attend funerals or visit relatives. The refusal that sparked rare criticism from a labour-supplying nation followed the opening in France of an investigation of a Qatari-French joint venture into alleged abuse of workers on World Cup projects.

Similarly, FIFA sponsors with Visa in the lead have voiced rare public concern in advance of next week’s FIFA executive committee meeting and congress where Qatar is either on the agenda or likely to be a lively topic of conversation in the corridors. In a statement, Visa expressed “grave concern” for the plight of migrant workers in Qatar. Other sponsors, including Coca Cola and Adidas, the company that was at the birth of FIFA’s booming finances, worried about the negative impact of their association with FIFA because of its controversial decision to award Qatar the World Cup issued similar statements.

The potential fan backlash was evident in a fake Coke ad that circulated on the Internet portraying Coca Cola as a supporter of human rights abuses in Qatar and an increasing number of anti-Qatar protests by fans and national soccer bodies.

England’s Football Association rejected Qatar as a sponsor opting instead for Emirates of Dubai, a part of the United Arab Emirates, Qatar’s arch rival that fares little better in its record of accommodating migrant workers. Scottish fans put the Scottish Football Association on the defensive for accepting to play a friendly against Qatar while supporters of Chelsea demonstrated against labour conditions in Qatar.

By the same token, Qatar has done little to endear itself to the media, an important potential conveyor of its message by repeatedly jailing western journalists reporting on labour issues in the Gulf state, seeking to justify the detentions with at times seemingly false legalistic arguments, and advising sources to lie low.

It is Qatar rather than the media that pays the price for these misguided steps, particularly given that Qatari credibility was further undermined by seemingly less than truthful statements about the integrity of its World Cup bid and the role played by disgraced former FIFA and Asian Football Confederation (AFC) executive Mohammed Bin Hammam laid bare in investigative reporting by The Sunday Times.

Mr. Bin Hammam was in 2012 banned for life by FIFA from involvement in professional soccer and silenced by a backhand deal between Qatar and the soccer body. Adding insult to injury, Qatar dented its effort to project itself as an enthusiastic sporting nation with the import of fans, some from labour camps, and others from as far as Spain.

Qatar’s flagship media operation, Al Jazeera, has further been tarnished by allegations that its Arabic channel was too closely associated with the Muslim Brotherhood, charges that its English channel failed to properly support its imprisoned reporters in Egypt that have culminated in a $100 million legal case against the network, and a scandal involving alleged sexism and anti-Semitism at its US channel that has led to a management shake-up.

The bottom line is that Qatar is getting no buck for the billions of dollars it has invested in what is fundamentally a smart soft power pillar of its overall security and defense policy. Qatar sees soft power as way to compensate for its inability to defend itself irrespective of how much and how sophisticated the military hardware is that it acquires and how many foreigners it drafts into its security forces and military to make up for its lack of bodies.

Nussaibah Younis of the Project on Middle East Democracy summed up neatly in an editorial in The Guardian what Qatar needs to do. “If Qatar wants to be counted among the most credible and valued powers partnering with the west, it must deal comprehensively with the abuse of migrant workers and decide where it stands on crucial issues such as freedom of the press,” Mr. Younis said. Mr. Younis is not the only one to have proffered that advice. So far, it seems to have gone unnoticed in Doha.

James M. Dorsey is a senior fellow at the S. Rajaratnam School of International Studies as Nanyang Technological University in Singapore, co-director of the Institute of Fan Culture of the University of Würzburg and the author of the blog, The Turbulent World of Middle East Soccer, and a forthcoming book with the same title.
Bin Hammam FIFA Qatar