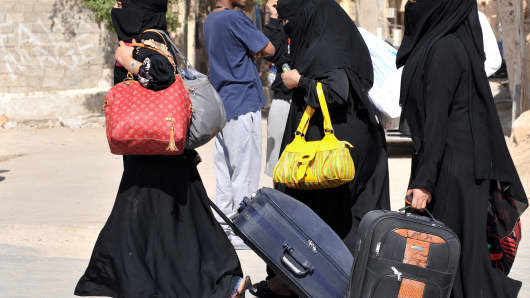 Fayez Nureldine | AFP | Getty Images
Foreign workers carry their belongings as they leave the Manfuhah neighbourhood of the Saudi capital Riyadh
Indonesia may have drawn a line in the sand when it banned further domestic helpers from working in 21 Middle Eastern countries, but the impact may prove elusive.
"From the perspective of Middle Eastern nations, it's a dime a dozen," James Dorsey, senior fellow at the S. Rajaratnam School of International Studies, said Wednesday. "There's no shortage of personnel."
Indonesia has taken the step anyway, preventing further domestic helpers from taking jobs in countries including Saudi Arabia, United Arab Emirates, Qatar and Egypt.
Read MoreDebt bondage behind Hong Kong sex trade
"The situation concerning our migrant workers, who were working as domestic helpers, has led to many problems such as those related to labor norms and human rights violation," Muhammad Hanif Dhakiri, Indonesia's minister of manpower, said, according to a report in the state-run Antara News.
Saudi Arabia's decision to execute two Indonesian domestic helpers on murder charges angered the Southeast Asian nation, which said it wasn't given notice before the beheadings were carried out.
Out of a total of around 4.02 million Indonesian migrant workers in 2013, around 1.33 million were based in the Middle East and around 1.06 million of those were in Saudi Arabia, according to Indonesian government data. In that year, out of around $7.42 billion in remittances, around $2.18 billion came from the Middle East, the data show.

Gulf Cooperation Council countries remain dependent on keeping the flow of workers into the region, with around 90 percent of private-sector jobs there filled by foreign labor, according to ILO, which noted there are more than 22 million migrant workers in the region.
But while Indonesia is cutting off the flow of fresh workers to the region, it isn't recalling the ones already there, essentially letting the numbers decline slowly by attrition.
That may limit any economic impact, but the region isn't necessarily entirely unaffected.
"The damage or cost to Middle Eastern nations is reputational," Dorsey said. "Other nations will be aware of this. The risk an Indonesian foreign domestic helper runs is the risk any foreign domestic helper runs."
Read MoreIndonesia's growth stumbles in first quarter
But he noted that unless the labor-exporting nations band together, it may be difficult to force changes in how workers are treated in the Middle East.
Qatar, however, may face a noticeable reputational hit from Indonesia's move, because it is expected to host the 2022 FIFA World Cup, Dorsey said.
As many as 1,200 migrant workers may have died in Qatar since it was awarded the cup and another 4,000 are likely to die before the event starts, the International Trade Union Confederation (ITUC) said in a report last year.
Last year, global risk consultancy Maplecroft downgraded the country to "extreme risk" for its working conditions. Allegations about workers' treatment in Qatar include forced labor, confiscation of passports, harmful working and housing conditions and lack of right to form trade unions.
For Indonesia's part, restricting the flow of workers to the Middle East isn't likely to affect its own economy too much, analysts said.
"Potentially, [the workers] will just try to find work somewhere else," Santitarn Sathirathai, an analyst at Credit Suisse, said, although he noted he didn't follow the issue closely. "Remittances aren't a key driver" for Indonesia's economy, he noted.
Indonesia's restrictions probably wouldn't have much impact on any workers traveling to the Middle East to work illegally, although estimates of "irregular" laborers are sketchy.
Other countries, such as Japan, may be stepping up their demand for foreign labor. Japan's ageing population and low birth rate have left it with worker shortages. Japan's construction industry faces a shortfall of 230,000 workers in 2015, government statistics show, and it may face an increasing need for caretakers of the elderly.
Indonesia may also be able to create more jobs at home, if the government is able to push through its plans for infrastructure development.
--Katy Barnato and Mia Tahara-Stubbs contributed to this article.
Egypt Qatar Saudi Arabia UAE