Red card for the ultras (JMD quoted in The Economist)

Red card for the ultras

The sport’s most volatile supporters are banned 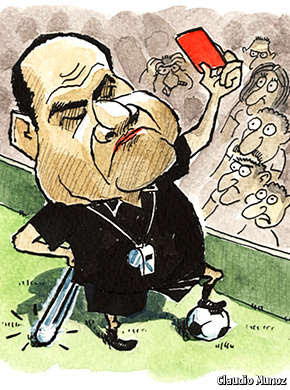 FOOTBALL, like politics, arouses strong passions in Egypt. Bring the two together and you get a combustible mixture. Add police brutality and you get the explosive atmosphere of Egypt’s football league.
Rivalries between opposing clubs are heated. The league was cancelled in 2012 after a brawl at a match in Port Said left 74 dead. (Play was suspended the next year, too.) But the animosity between Egypt’s hard-core fans, known as “ultras”, and the authorities—who share blame for the Port Said violence—is even fiercer. Matches are now played behind closed doors, without fans, to avoid incidents. On May 16th a court in Cairo tried to stamp out any remaining embers by banning ultra groups.
In this section
Reprints
The case against the ultras was brought by Mortada Mansour, the chairman of Cairo-based Zamalek SC and a supporter of Abdel-Fattah al-Sisi, Egypt’s president. Mr Mansour is hated by fans, who doused him with urine last year. He calls the ultras “terrorists”. When 22 people were killed in a stampede outside a match in February, fans blamed aggressive police. But Mr Mansour said the ultras provoked the security forces. Pressed for an explanation, he replied: “Ask the Muslim Brotherhood.”
Ties to the Brotherhood are often alleged by the government and its allies to discredit opposition. But while some of the ultras are Islamists, their groups (usually linked to clubs) are not associated with the blacklisted movement. That Muhammad Morsi, the ousted president and Muslim Brother, was sentenced to death on the same day the ultras were banned is merely an indication of Mr Sisi’s broad crackdown on dissent. Hardened by their battles with police during the protests that toppled Hosni Mubarak in 2011, some ultras are now “driving the protests against Sisi”, says James Dorsey, author of a forthcoming book on football in the Middle East.
Such activism has earned the ultras, who are generally young and urban, a reputation as an organised political force. That is true of some groupings, such as the Ultras Nahdawy, which is not associated with a club and opposes Mr Sisi. But other ultras bristle at this characterisation. “Maybe after the revolution some of us chanted political slogans in the stadium,” says one, “but the groups never declared official participation in any political event.” Most simply oppose the security forces. “Beyond that, their political views run the gamut,” says Mr Dorsey.
The government nevertheless sees them as a threat. Sixteen “ultras fans and Muslim Brotherhood members”, as the prosecution refers to them, stand accused of causing the incident in February in order to sabotage a big investment conference. Several members of Nahdawy have been killed by security forces. If the ultras and the Brotherhood are as bad as the authorities say, then half of Egyptians are terrorists, notes one fan.
From the print edition: Middle East and Africa
Al Zamalek Egypt Ultras