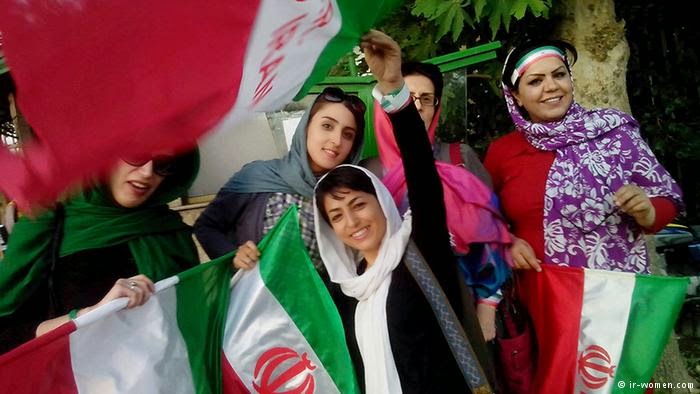 A British-Iranian woman imprisoned In Tehran for attempting to watch a men’s volleyball match is at the centre of Iran’s cultural wars that constitute the backdrop to efforts to resolve problems with Iran’s nuclear program and a struggle between reformists and conservatives in advance of parliamentary elections 18 months from now.

The arrest In June of 25-year old Ghoncheh Ghavami together with more than a dozen other women as they tried to enter a stadium where the Iranian national men’s team was playing Italy was first disclosed earlier this month by The Guardian. Ms. Ghavami’s attempt to enter Tehran’s Azadi stadium was part of a protest staged by dozens of women against the fact that Brazilian women had earlier been allowed to attend a volleyball match between their country’s national team and Iran.

Ironically, volleyball, the setting for the latest phase in the battle for Iranian women’s sporting rights, is also a 21st century’s US-Iranian equivalent of Chinese-American table tennis diplomacy in the 1970s that opened the door to the establishment of diplomatic relations. “We see (volleyball) as an incredible opportunity to promote goodwill and understanding between the Iranian and American people,” State Department communications adviser on Iran Greg Sullivan told Al-Monitor as Iran’s national team played a series of friendlies in the United States. In contrast to Iran, Iranian-American women had no problem attending the friendlies.

The volleyball protest followed widespread rejection by coffee shop owners and female soccer fans in Iran of restrictions on women watching publicly screened soccer matches during the recent World Cup in Brazil. They openly flaunted with no government response orders by authorities to keep television sets off during World Cup matches. The orders were intended to prevent men and women from publicly watching matches together.

Soccer features also in street art battles that are a key venue in Iran’s culture wars. A recent mural on one of Tehran’s main thoroughfares pictured a woman wearing a national soccer team jersey as she washed dishes at home. The mural went viral on social media. In the mural, the woman raises a cup of yellowish dishwash solution as if it were the World Cup trophy in what was seen as a rejection of conservative notions that a woman’s place is at home.

At stake in the battle is however far more than just women’s sports rights. Those rights are part of a larger struggle for Iran’s future as Iranian negotiators meet in New York this month with the five permanent members of the United Nations Security Council to reach agreement on resolving the Iranian nuclear problem before November 24 deadline. Iranian conservatives fear that a successful negotiation would strengthen the hand of supporters of reformist president Hassan Rohani in parliamentary elections scheduled for the spring of 2016.

With popular support for the nuclear talks, conservatives hope to thwart Mr. Rouhani by appealing to traditional values in their effort to undercut his efforts to reduce repression and allow for greater freedom of expression and access to information, promote gender equality, and ease cultural and educational restrictions. Mr. Rouhani like other members of his Cabinet regularly posts messages on Facebook and Twitter despite the fact that access to social media sites is frequently blocked in Iran. The president has also argued publicly that freedom is a precondition for creativity and has contradicted conservative efforts to curb fun.

The culture wars last month kicked into high gear when parliament impeached Mr. Rouhani’s minister of science, research and technology, Reza Faraji-Dana, on charges that he had reinstated academics and students who had been barred by the president’s hard line predecessor Mahmoud Ahmadinejad. Parliament is likely to target other members of Mr. Rouhani’s Cabinet.
Iranian spiritual guide Ayatollah Ali Khamenei has so far allowed Mr. Rouhani to move forward with the nuclear talks and efforts to improve Iran’s sanctions-hit economy but has sided publicly with conservative moves to stymie his liberalization moves.

In one of the latest salvos in the culture wars, Iran’s state-owned media and conservative websites reported earlier this month that Shahla Sherkat, the editor of a newly launched women’s magazine, Zanan-e Emruz (Today’s Women), would be charged with promoting feminism after publishing a story on Iran’s restrictive sports stadium law and an interview with a human rights activist opposed to the death penalty.

One conservative website criticized the government’s licensing of Zanan-e-Emruz on the grounds that “feminist views are in clear opposition to the Quran.” Ms. Sherkat told AFP that she had been accused by Iran’s media watchdog of publishing pictures of women that portrayed them as objects.

An acclaimed women’s magazine that was edited by Ms. Sherkat for some 16 years was closed down in the Ahmadinejad era after it ran a cover story headlined: ‘Freedom: Where Can We Scream?’ The cover picture showed two women carrying a sign saying “Tehran Stadium Has a Capacity of 100,000 people.’ The word people was crossed out so that the sign read: ‘Tehran Stadium Has a Capacity of 100,000 men.’

James M. Dorsey is a senior fellow at the S. Rajaratnam School of International Studies as Nanyang Technological University in Singapore, co-director of the Institute of Fan Culture of the University of Würzburg and the author of the blog, The Turbulent World of Middle East Soccer, and a forthcoming book with the same title.
Iran Women