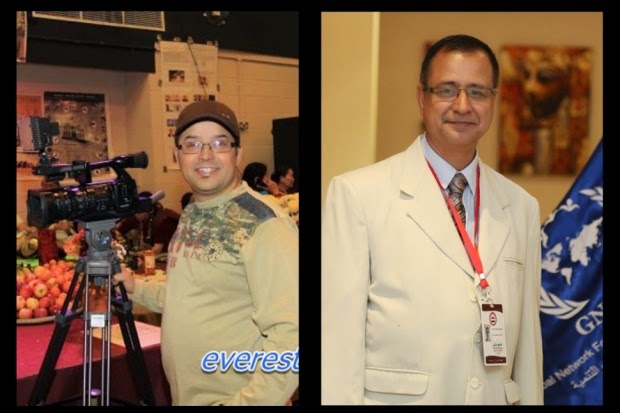 The disappearance of two British World Cup 2022-related labour rights researchers points to apparent escalating hostility between Qatar and the United Arab Emirates over Doha’s support for the Muslim Brotherhood; highlights the Gulf state’s lack of transparency with its silence about the fate of the two men; and has sparked fears that Qatar may be backtracking on promises to improve the working and living conditions of its majority foreign worker population.

Krisna Upadhyaya and Gundev Ghimire, British nationals of Nepalese origin, vanished in Doha as they were about to leave for the airport. They were in Qatar to investigate labour rights on behalf of the Global Network for Rights and Development (GNRD), a Norway-based group with alleged links to the UAE. The two men were last heard of on Sunday in a series of tweets they sent suggesting that they were being followed at close range by plainclothes Qatari security personnel.

Stung by a campaign by human rights groups and international trade unions, Qatar has since winning in 2010 the right to host the World Cup in 2022, engaged with critics of its restrictive kafala or sponsorship system that puts workers at the mercy of their employers and promised to substantially improve their conditions and rights. The Gulf state has yet to make good on those promises, which critics see as a first step rather than Qatari compliance with international labour standards. The disappearance of the two Brits, even if they were arrested on the grounds that GNRD allegedly is not a bona fide human rights groups, fuels  mounting suspicions among human rights groups and trade unions that Qatar may not be serious about matching its words with deeds.

“Investigating migrant worker abuse in Qatar is not a crime, hundreds of journalists have done this. Qatar deserves some credit for being a relatively open place for people to do this kind of research. If this incident marks a change in that attitude then that’s very concerning and should concern the Qataris too, particularly in light of the forthcoming FIFA report into allegations of corruption in the bidding process for the 2022 World Cup,” said Human Rights Watch Gulf researcher Nick McGeehan in press reports.

Suspicion that Messrs Upadhyaya and Ghimire may have been detained by Qatari security on grounds that they were possibly unwittingly working for an alleged UAE front organization stems from the fact that the GNRD has heaped unwarranted praise on the UAE’s widely criticized human and labour rights record, is funded by anonymous donors to the tune of €3.5 million a year according to veteran Middle East journalist and author Brian Whitaker, and the arrest in the UAE of several Qatari nationals on spying charges, one of which dubbed a prisoner of conscience by Amnesty International was sentenced to prison. The disappearance of the two Brits potentially is linked to the detention of the Qataris in the UAE.

If related to Qatar’s escalating dispute with the UAE, the arrests would signal that Gulf efforts to paper over differences among Gulf states over Qatar’s idiosyncratic foreign policy have failed. The UAE alongside Saudi Arabia and Bahrain in March withdrew its ambassador from Doha in protest against Qatari support for the Muslim Brotherhood. An emergency meeting of Gulf heads of state earlier this month to confront the threat posed by the Islamic State, the jihadist group that controls a swath of Syria and Iraq, made no mention of the dispute and sought to project a united front.

The UAE has taken a lead in recent weeks in confronting the Brotherhood and other Islamists with its air attacks on Islamist forces in Libya in cooperation with the Gulf-backed Egyptian government of general-turned-president Abdul Fattah al Sisi. UAE hostility towards the Brotherhood is long-standing and deep-seated. Alleged Brothers have been sentenced to lengthy prison terms in legal proceedings that have been condemned by human rights groups.

Abu Dhabi Crown Prince and Armed Forces Chief of Staff Sheikh Mohammed bin Zayed bin Zayed Al Nahayan warned US diplomats as far back as 2004 that "we are having a (culture) war with the Muslim Brotherhood in this country,“  according to US diplomatic cables disclosed by Wikileaks.

In 2009. Sheikh Mohamed went as far as telling US officials that Qatar is "part of the Muslim Brotherhood."  He suggested that a review of Al Jazeera employees would show that 90 percent were affiliated with the Brotherhood.  Other UAE officials privately described Qatar as “public enemy number 3”, after Iran and the Brotherhood.

The UAE like Qatar has recently become alongside Qatar a focal point of criticism of its labour rights record and sponsorship system. The Guardian earlier this year citing Foreign Office reports accused the UAE of torturing detained British nationals. The UAE has denied the charges.

In addition, prominent artists have called for a boycott of the Guggenheim museum being built on Abu Dhabi’s Saadiyat Island, one of several big name museums planned to position the emirate as a sponsor of the arts and a tourism destination, in protest against the conditions of workers involved in the construction. The New York Times reported that striking workers building a New York University campus in Abu Dhabi had been raided, beaten and deported.

The UAE like Qatar has recently sought to shore up its tarnished image by funding community soccer projects in major US cities. Human Rights Watch warned in 2013 that the UAE was using soccer to launder its image.  Former English Football Association chairman Lord Triesman called at the time for making a country’s human rights record one of the criteria for establishing whether a state entity or member of a ruling family passes the "fit and proper person test" for ownership of a Premier League club. A senior member of the UAE ruling family owns Manchester City and Dubai’s Emirates airlines is a major sponsor of English football.

Established in 2008 "to enhance and support both human rights and development by adopting new strategies and policies for real change," GNRD has been critical of Qatari labour and human rights practices.

More problematic is the group’s International Human Rights Rank Indicator (IHRRI) that lists the UAE at number 14 as the Arab country most respectful of human rights as opposed to Qatar that lists at number 94. The ranking contradicts reports by human rights groups, including the United Nations Human Rights Council (OHCHR) which earlier this year said it had credible evidence of torture of political prisoners in the UAE and questioned the independence of the country’s judiciary. Egypt’s State Information Service reported in December that GNRD had supported the banning of the Muslim Brotherhood as a terrorist organization and called for an anti-Brotherhood campaign in Europe.

GNRD is presided by Loai Mohammed Deeb, a reportedly Palestinian-born international lawyer who has a long track record as a human rights activist and owns a UAE-based consultancy. Mr. Deeb is believed to be a driving figure together with Syrian human rights activist Haythem Manna behind the Norway-based Scandinavian Institute for Human Rights, a group about which little is known and whose trilingual website is primarily in Arabic. He is also executive director of the France-based International Coalition Against War Criminals that focuses on Palestine, Syria and Libya.

GNRD executive director Evgenia Kondrakhina defended the group’s record. She said its “human rights index is based on reports from several sources including from the UN and our volunteers. Experts then evaluate all the reports and calculate the level of human rights giving our index. It’s a mixture of technical procedures and expert reports.”

James M. Dorsey is a senior fellow at the S. Rajaratnam School of International Studies as Nanyang Technological University in Singapore, co-director of the Institute of Fan Culture of the University of Würzburg and the author of the blog, The Turbulent World of Middle East Soccer, and a forthcoming book with the same title.
Qatar UAE World Cup 2022