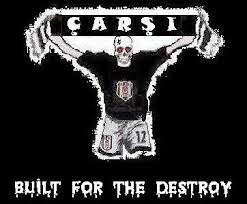 Newly elected Turkish president Recep Tayyip Erdogan joined this week a host of Middle Eastern and North African leaders seeking to portray protest as terrorism or a threat to national security with the indictment of 35 militant soccer fans on charges of trying to topple his Islamist government. Turkish prosecutors have demanded that they be sentenced to life in prison.

The indictment of the members of Carsi, the popular militant support group of storied Istanbul club Besiktas JK, which played a key role in last year’s mass Gezi Park anti-government protests coincided with calls in Egypt, reportedly supported by Egyptian general-turned-president Abdel Fatah Al Sisi, to outlaw the ultras. The ultras are groups of street battled-hardened soccer fans who were crucial to the popular uprising in 2011 overthrow of President Hosni Mubarak and subsequent opposition to military rule.

Basing his charges on wiretaps, Adem Meral, an Istanbul Terrorism and Organized Crime Unit prosecutor, charged that the soccer fans had not been driven to join the protests by environmental concerns and opposition to plans to replace the historic Gezi Park on the city’s iconic Taksim Square with an Ottoman-style shopping mall. Instead, Mr. Meral said in his 38-page indictment: “It is understood that they were trying to overthrow the democratically elected Turkish government and to facilitate this objective, they were attempting to capture the Prime Ministry offices in Ankara and Istanbul.”

The indictment cited as evidence statements by various defendants in tapped telephone conversations. One defendant said he was “not interested in the construction of the mall or the demolition of trees” but wanted to “topple the government.” Another suggested that the protests could lead to civil war, adding that “we will today occupy the prime ministry's residence.” Others suggested attacking the police to fuel public anger.

Turkey was criticized by its European and US allies as well as human rights group for its heavy- handed efforts to halt the protests in which at least eight people were killed and some 8,000 others wounded.

In line with Mr. Erdogan’s assertions at the time that the protests against his increasingly haughty style of government were a foreign conspiracy, the indictment charged that Carsi that traces its roots to the far left and positions itself as anarchist, had sought to create the impression that Turkey was experiencing an Arab spring by feeding pictures of clashes with police to foreign journalists.

Charging that Carsi was an armed group, the indictment accused Erol Ozdil, described as one of the group’s leaders, with distributing torches and explosives to his colleagues. It said police had found smoke grenades and gas masks in Mr. Ozdil’s house.

Some 20 members of Carsi were initially arrested a year ago on charges of belonging to an illegal organization, but were later released. A video released at the time by the prime minister’s Anti-Terrorism Office – Mr. Erdogan was serving at the time his third term as prime minister – warned that protests were a precursor to terrorism.

The 55-second video featuring a young woman demonstrator-turned suicide bomber warned the public that “our youth, who are the guarantors of our future, can start with small demonstrations of resistance that appear to be innocent, and after a short period of time, can engage without a blink in actions that may take the lives of dozens of innocent people.” Throughout the video, the words ‘before it is too late’ were displayed.

The trial of the soccer fans for which a date has yet to be set follows several ongoing court proceedings against other protesters in which prosecutors are also seeking harsh sentences. The cases are being prosecuted by a judiciary that like the police force in recent months has been cleansed of alleged supporters of Fethullalh Gulen, a self-exiled Islamic cleric and head of one of the world’s richest Islamist groupings that Mr. Erdogan accuses of attempting to create a parallel state.

Mr. Erdogan openly turned on the group after scores of people, including the sons of three of his ministers, were detained on corruption charges. Subsequent tapes leaked to the media suggested that several of his associates as well as members of his family were involved.

Amnesty International said in a report last year on the Gezi Park protests that the brutal suppression by police and the subsequent campaign against militant soccer fans “significantly undermined the claims of (Mr. Erdogan’s) ruling Justice and Development Party to be delivering responsible, rights-respecting government and exposed a striking intolerance of opposing voices. The smashing of the Gezi Park protest movement has involved a string of human rights violations – many of them on a huge scale. These include: the wholesale denial of the right to peaceful assembly and violations of the rights to life, liberty and the freedom from torture and other ill-treatment. The vast majority of police abuses already look likely to go unpunished, while many of those who organized and participated in the protests have been vilified, abused – and now face prosecution on unfair or inflated charges.”

Mr. Erdogan’s government has attempted over the last year to depoliticize stadia by banning the display and chanting of political slogans during matches, demanding that spectators sign a pledge to refrain from political expression before entering a stadium, and introducing an e-ticket system that would allow authorities to identify fans. Carsi’s response to the government efforts was to chant during matches, "everywhere is Taksim, everywhere is resistance."

James M. Dorsey is a senior fellow at the S. Rajaratnam School of International Studies as Nanyang Technological University in Singapore, co-director of the Institute of Fan Culture of the University of Würzburg and the author of the blog, The Turbulent World of Middle East Soccer, and a forthcoming book with the same title.
Besiktas Turkey Ultras