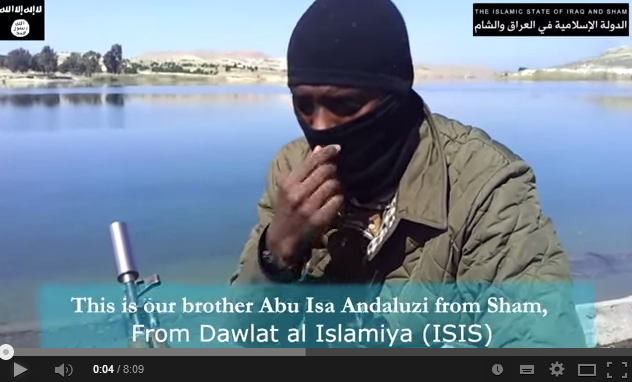 Jihadists, often eager to exploit soccer for their ideological goals, have found a new way of employing the game for propaganda and recruitment purposes. A recent jihadist video suggested that an apparent Portuguese fighter in Syria was a former French international who had played for British premier league club Arsenal.

The video exploited the physical likeness of a masked jihadist fighter believed to be Celso Rodrigues Da Costa, to that of French international Lassana Diarra. Voice analysis suggested however that the man brandishing an AK-47 weapon in the clip was Mr. Da Costa, a Portuguese national who had lived in East London for some time and may have attended youth coaching sessions at Arsenal. Mr. Diarra played for Arsenal before moving to Lokomotiv Moscow.

Mr. Da Costa would be the third London-based Portuguese national to have joined the Syrian jihad.  Last October, Burak Karan, an up and coming German-Turkish soccer star, was killed during a Syrian military raid on anti-Bashar al Assad rebels near the Turkish border. Messrs. D Costa and Karan joined a list of soccer players-turned-militants who have gone to the Middle East and North Africa or had roots in the region or in Islam. They are among thousands of Europeans believed to have joined the war in Syria.

In the eight-minute video posted on FiSyria.com, a website associated with the Islamic State of Iraq and Syria (ISIS), one of the most militant jihadist groups in Syria, Mr. Da Costa, using the nomme de guerre Abu Isa Andaluzi and speaking with a heavy accent, urged others to join the jihadists.

A caption under the video posting read; “A former soccer player - Arsenal of London - who left everything for jihad.” Another text said: "He... played for Arsenal in London and left soccer, money and the European way of life to follow the path of Allah.”

On camera, Mr. Da Costa said: "My advice to you first of all is that we are in need of all types of help from those who can help in fighting the enemy. Welcome, come and find us and from those who think that they cannot fight they should also come and join us for example because it maybe that they can help us in something else, for example help with medicine, help financially, help with advice, help with any other qualities and any other skills they might have, and give and pass on this knowledge, and we will take whatever is beneficial and that way they will participate in jihad."

Mr. Da Costa’s projection of himself as a soccer star signalled an apparent perception among jihadists that three years after the capture and killing of Al Qaeda leader Osama Bin Laden the movement is in need of celebrities. Bin Laden’s successor, Ayman Zawahiri, a dour 62-year old medical doctor in hiding, doesn’t quite cut it as a charismatic figure.

Jihadists “have finally embraced the idea that nothing can truly be put into perspective today unless it is filtered through the prism of our own fametastic Premier League,” The Guardian quipped n a satirical editorial.

Soccer has long served jihadists as a recruitment and bonding tool. It brings recruits into the fold, encourages camaraderie and reinforces militancy among those who have already joined.

Palestinian suicide bombers in Israel traced their roots a decade ago to a West Bank soccer team. The 2004 Madrid train bombers played the beautiful game together and several Saudi players joined the anti-American jihad in Iraq following a fatwa or religious ruling by conservative Muslim preachers denouncing football as a game of the infidels.

In Russia, authorities three years ago arrested three men on charges of wanting to blow up the high speed Sapsan railway linking Moscow and St Petersburg. The three were childhood friends who traced their roots to the northern Caucasus, a hotbed of Islamist militancy, where they played soccer together.

Mr. Da Costa’s video adds propaganda or what The Guardian called “an exciting development in jihadist PR” to the jihadist toolkit even if it was not immediately clear whether he and Mr. Karan were driven to give up potential or promising soccer careers by a radical interpretation of Islam or a deep-seated humanitarian concern for the victims of brutal wars like that in Syria.

What Messrs. Da Costa and Karan however shared with players-turned-jihadists as well as various jihadist leaders including Mr. Bin Laden, Hamas Gaza foreman Ismail Haniyeh and Hezbollah chief Hassan Nasrallah is a deep-seated passion for the sport and that their road towards militancy often involved an action-oriented activity, soccer.

Messrs, Da Costa and Karan’s cases appear nevertheless more similar to those of players Yann Nsaku or Nizar ben Abdelaziz Trabelsi, individuals who radicalized, rather than the Hamas or Madrid bombers or the Saudi players who turned militant in the context of a group.

Mr. Nsaku, a Congolese born convert to Islam and former Portsmouth FC youth centre back, was one of 11 converts arrested in France in 2012 on suspicion of being violent jihadists who were plotting anti-Semitic attacks.