Qatar to cut ‘one third’ of World Cup stadiums 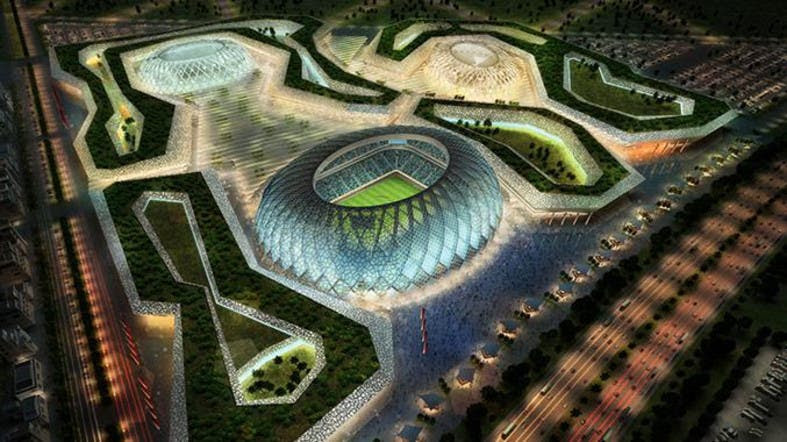 Qatar originally planned 12 stadiums for the 2022 World Cup. (Photo courtesy: Qatar 2022 Bid Committee)
Text size A A A
By Ben Flanagan | Al Arabiya News, DubaiMonday, 21 April 2014
Qatar is to slash the number of stadiums it builds for the 2022 World Cup, according to reports, with the local tournament organizer confirming the number of grounds is under review.
The country originally set out plans for 12 football stadiums, including three refurbished grounds. But it has now cut that to eight, according to statements by Ghanim al-Kuwari, the organizing committee’s senior manager for projects, quoted by Bloomberg.
Kuwari did not give a reason for the reduction, which comes at a time of rising costs and several controversies surrounding Qatar's hosting of the tournament.
The Qatar World Cup committee confirmed to Al Arabiya News that the final selection of venues is still under review.
“For Qatar, the process of selecting the final proposed line-up of host venues is ongoing. In due course, the final proposal for stadia will be submitted to the FIFA Executive Committee for approval. The requirement is a minimum of eight and a maximum of 12 stadia,” the Qatar committee said in a statement.
A committee spokesman confirmed that Qatar’s original bid included 12 stadiums. He said it was normal for plans outlined in a bid to be reviewed once a country is chosen as host.
But James Dorsey, author of a blog and related book entitled The Turbulent World of Middle East Soccer, said it is rare for World Cup hosts to change plans indicated in their original bids.
“Qatar signalled last year that it was considering reducing the number of stadia. It has to do so in consultation with FIFA. Normally, hosts stick to the plans they submitted as part of their bid,” Dorsey said. “Qatar will obviously have to justify this and demonstrate that a reduction will not impact the tournament.”
Relevant factors include the time of year when the World Cup will be held (still undecided in Qatar’s case), the ability to cool venues should the tournament be held in summer months, and broadcasting schedules, Dorsey said.
The commentator added that he would be “surprised” if cost were the main issue behind any decision to cut the number of venues.
Qatar is embarking on a massive infrastructure outlay ahead of the 2022 tournament, set to cost more than $200 billion. The stadiums will cost $4 billion, according to the ministry of business and trade cited by Bloomberg.
Yet the Gulf state has faced rising costs and pressure from campaigners over its treatment of foreign workers.
Other controversies surrounding Qatar's hosting of the World Cup include allegations that almost $2 million was paid to a senior FIFA official and his family just after the Gulf state won its controversial bid.
The Qatar 2022 World Cup committee denied any wrongdoing in the wake of those allegations.
Last Update: Monday, 21 April 2014 KSA 12:01 - GMT 09:01
FIFA Qatar World Cup 2022