Soccer and autocracy: Who do national football teams represent? 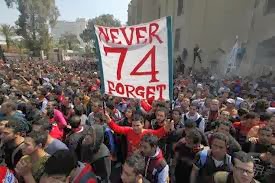 Little better illustrates the inextricable link between sports and politics than the frequent perception of Middle Eastern and North African national football teams as representatives of repressive autocratic regimes.

That perception is reinforced by players’ adoption of a neo-patriarchic acceptance of their autocratic leader as a father figure that leads them to keep a distance to mass expressions of political discontent. It is also strengthened by efforts by Middle Eastern and North African autocrats to control soccer in a bid to ensure that it does not emerge as a rallying point for protest and in an attempt to exploit the sport’s popularity to shore up their tarnished images.

Nowhere is support for the national team more dependent on politics than in Egypt. Opponents of the country’s military-backed interim government blamed Ghana’s 6:1 dashing  last month of Egypt’s hopes to qualify for the first time in almost a quarter of a century for a World Cup finals on the toppling of Egypt’s only democratically elected president, Mohammed Morsi, by military strongman General Abdel Fatah al-Sisi.

"You jinxed us, Al-Sisi," said Mohammed Dardeer on Facebook, describing the general as "religiously defiled" in a comment reminiscent of perceptions in Iran that blamed the Islamic republic’s soccer failures on the intense interest in the game displayed by former president Mahmoud Ahmadinejad. It also reverts Egypt to the period before 2011 when a popular revolt forced President Hosni Mubarak to resign after 30 years in office and militant soccer fans, one of the country’s foremost social movements, rejected the national team as “Mubarak’s squad.”

Perceptions of the national team’s political role position it as the object of a tug of war between nation and regime, particularly in countries where the relationship of sports and politics is ungoverned. That lack of governance creates gray areas that in 2010 for example allowed Egypt and Algeria’s autocrats to whip up national emotion and bring their countries to the brink of war over the outcome of a key World Cup qualifier.

In post-revolt Arab nations like Egypt, Tunisia and Libya political control has largely meant preventing soccer pitches from becoming protest rallying points. As a result, fans have been banned from stadia, forcing teams to play in front of empty terraces. That approach is becoming however increasingly untenable.
Ghana defeated Egypt in the first of two matches at a time that the country is deeply divided between supporters and opponents of the military. The coup prompted many of the military’s opponents to view the national team as representing the regime rather than the country much as militant soccer fans did under Mr. Mubarak. That earned them charges of being traitors by those who see the Brotherhood rather than the military as the greatest obstacle to resolving Egypt’s political crisis.

“When a large number of Egyptians, too many to be ignored, felt happy after our national team lost to Ghana, didn't the coup organizers ask themselves why they felt this way towards their national team? They most likely will not bother themselves to think about it, but will claim naively, ‘It is out of spite so that no victories, not even in football, will be attributed to General Al-Sisi…  Al-Sisi's Egypt is no longer the Egypt of love that celebrates victories, as tyranny and injustice cannot win; they are defeated in every aspect, whether militarily, as in 1967 (Israel’s defeat of Egypt), or on the sports field. It is ironic that one of the coup leaders called the football result a catastrophe, which was what the 1967 defeat was called.” quipped Amira Abo el-Fetouh in the Middle East Monitor.

Ghana’s stunning thrashing of Egypt did persuade the military to allow some 30,000 fans to attend the return match in an out-of-the-way Cairo stadium scheduled for November 19. The symbolism of Egypt’s performance – victory or defeat – in the return match weighs heavy on the game given the regime’s need to project itself more positively internationally and to counter the analogy of defeats on the military and the soccer battlefields. The symbolism is all the greater with General Al-Sisi also celebrating his birthday on November 19.

The qualifier alongside an earlier clash between storied Cairo club Al Ahli SC, whose militant supporters played key roles in the toppling of Mr. Mubarak and the subsequent three years of volatile street politics and the Orlando Pirates, South Africa’s oldest soccer team, have become litmus tests of the military’s ability to demonstrate that it can ensure security amid a growing insurgency in the Sinai and continued protests against Morsi’s deposal.

Ghana, concerned about security in Egypt, is pressuring FIFA to move the November 19 match to a neutral venue. "We will be monitoring the game between Al Ahli and Orlando Pirates to see whether we can draw some conclusions about the situation in Cairo ahead of our game," said Ghana football association management committee member Yaw Boateng.