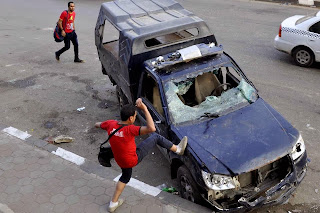 Clashes this weekend between security forces and militant supporters of crowned Cairo club Al Ahli SC and a political demonstration by the team’s goalkeeper have dented the Egyptian military-backed government’s efforts to show that the country had put its political crisis behind it. The clashes raise the specter of world soccer body FIFA moving for security reasons Egypt’s 2014 World Cup qualifier against Ghana, scheduled for November 19 in Cairo, military strongman General Abdel Fattah Al-Sisi’s birthday, to a neutral venue.

The incidents overshadowed Al Ahli’s eighth triumph as African champion, an achievement in a country that has been wracked by political volatility since the 2011 popular revolt that toppled President Hosni Mubarak and a coup in July that overthrew Egypt’s first democratically elected president, Mohammed Morsi. Al Ahli’s victory contrasts starkly with the performance of Egypt’s national team, which has effectively lost hope to reach the World Cup finals when Ghana defeated it earlier this month 6:1 in a first match in Accra.

The government has since sought to avert clashes with militant, highly politicized, well-organized and street-battled hardened soccer fans who played a key role in the ousting of Mr. Mubarak and subsequent opposition to the military with a number of conciliatory measures. Al Ahli’s match on Sunday against the Orlando Pirates, South Africa’s oldest club, was the first game attended by spectators since 74 Al Ahi fans died in February of last year in a politically-loaded brawl in the Suez Canal city of Port Said. Authorities further released on the eve of the match 25 Al Ahli fans arrested a month ago when they attempted to storm an arrival terminal at Cairo airport.

Fans commemorated the 74 dead in chants during the match and put up posters in remembrance of the incident that is widely believed to have been an attempt that got out of hand to teach the militants a lesson and counter their revolutionary zeal. The fans lit up the stadium secured by some 4,000 police officers with armored vehicles with bright red flares and fireworks as security forces lobbed tear gas.

The clashes followed an earlier refusal by opponents of the military-backed government to support Egypt’s national team in its match against Ghana because it represented the regime rather than the nation. The refusal largely by supporters of Mr. Morsi who’s Muslim Brotherhood has been brutally targeted by the military and the security forces, is reminiscent of perceptions in Iran that blamed the Islamic republic’s soccer failures on the intense interest in the game displayed by former president Mahmoud Ahmadinejad.

Perhaps even more significant than the clashes with the security forces was the fact that Al Ahli goalkeeper Ahmed Abdul Zaher celebrated his decisive goal with a four-fingered hand signal - a gesture that
commemorates the sit-in of Morsi supporters at Cairo’s Rabaa al-Adawiya mosque which was violently cleared by security forces in August, leaving hundreds killed. Human rights groups say some 1,300 people have been killed and that thousands more have been injured and incarcerated since the toppling of Mr. Morsi and the crackdown on the Brotherhood.

"Yes I raised the sign of Rabaa. But I didn't mean political excitement to any one side or fan. All I meant to do was to remember the dead, whether in Rabaa, any other citizen and even policemen,” Mr. Abdul Zaher said.

Mr. Abdul Zaher’s gesture broke with a tendency among players to remain publicly aloof from the country’s
political travails and highlighted the deep fissures between supporters and opponents of the military. Starred Al Ahli player Mohammed Aboutreika who scored the team’s first goal against the Pirates denied in August that he had verbally confronted a security officer detailed to protect the team, saying:  “Are you bringing the army which is killing the people to secure us?”

At the heart of players’ reluctance to join popular revolts is what Palestinian-American historian Hisham Sharabi called neo-patriarchy in a controversial 1992 book that is still banned in many Arab countries. Mr. Sharabi argued that Arab society was built around the dominance of the Father (patriarch), the center around which the national as well as the natural family are organized. Between ruler and ruled, between father and child, there exist only vertical relations: in both settings the paternal will is absolute will, mediated in both the society and the family by a forced consensus based on ritual and coercion.

In other words, according to Mr. Sharabi's thesis, Arab regimes franchised repression so that in a cultural patrimonial society, the oppressed participated in their repression and denial of rights. The regime is in effect the father of all fathers at the top of the pyramid. General Al-Sisi has emerged as Egypt’s father with many Egyptians wanting him to run for the presidency. Despite public denials that he was considering running for office, Gen. Al-Sisi has done little to stem expressions of public support.

A popular Egyptian blog tracks expressions of adulation for the general.  Posters of Al-Sisi hang in shop windows as businesses take advantage of the Sisi mania by rebranding their products in his image. Chocolate-maker Bahira Galal offers clients a choice between chocolates coated with Al-Sisi’s face and others embossed with messages of adulation such as "Thank you, Sisi, from the bottom of our hearts." Fans on Facebook have created hundreds of pages obtaining millions of “likes” from those who want to pledge their allegiance to military chief.

In a blow to the military-backed government’s prestige and General Al-Sisi’s to project Egypt as business as usual, Ghanaian sports and youth minister Elvis Afryie Ankrah’s efforts to persuade FIFA to move the November 19 qualifier against Egypt to another country were boosted by this weekend’s clashes. He said Ghanaian players feared for their safety. “It’s a matter of fairness,” Mr. Ankrah said.

James M. Dorsey is a senior fellow at the S. Rajaratnam School of International Studies, co-director of the University of Würzburg’s Institute for Fan Culture, and the author of The Turbulent World of Middle East Soccer blog and a forthcoming book with the same title.
African Cup Al Ahly (Egypt) Egypt Ultras