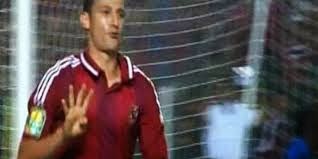 This week’s banning of a prominent Egyptian soccer player for expressing political views on the pitch goes to the core of international sports’ problems: a refusal to recognize the inextricable linkage between sports and politics, the political manipulation of soccer by regimes in the Middle East and North Africa with the tacit endorsement of world soccer governing body FIFA, and the continuous flaunting of their own rules and regulations by FIFA and other international, regional and national sports governing bodies.

Striker Ahmed Abd El-Zaher was banned by crowned Cairo club Al Ahli SC and put up for sale despite having another four years on his contract at the behest of the minister of sports in Egypt’s military-backed government, Taher Abouzeid, and the Egyptian Football Association (EFA) for showing an opposition four finger sign after scoring a goal in a match against South Africa’s Orlando Pirates that helped earn the club its eighth African club championship title.

The sign known as Rabaa (fourth) in Arabic symbolizes Rabaa al Adawiya Square in Cairo where opponents of the military camped out for weeks this summer in protest against the ousting by the armed forces in July of Mohammed Morsi, Egypt’s first democratically elected president. Hundreds of people were killed in mid-August when security forces evicted the protesters from the square as part of a brutal crackdown on Mr. Morsi’s Muslim Brotherhood.

Mr. Abd El-Zaher was the second athlete in as many weeks to be penalized for showing the anti-military four finger sign. Kung Fu fighter Mohamed Youssef was late last month suspended for a year for showing the sign after he won a gold medal in the Sports Accord Combat Games competition in St. Petersburg.

Egypt’s autocratic rulers as well as their associates in sports and club management traditionally penalize players only when they express anti-government sentiments but never when they praise their rulers – no less an expression of a political view than the four finger sign. Players largely endorsed ousted president Mr. Mubarak because he showered them with gifts when they were victorious. It was Mr. Mubarak’s way of associating himself with Egypt’s most popular form of popular culture in the hope that some of the game’s glory would counter his increasingly tarnished image.

Player and soccer management support for Mr. Mubarak was also the consequence of what Palestinian American scholar Hisham Sharabi described as the neo-patriarchic nature of the Mubarak regime and other autocracies in the Middle East and North Africa.

He argued that Arab society was built around the "dominance of the Father (patriarch), the center around which the national as well as the natural family are organized.  Between ruler and ruled, between father and child, there exist only vertical relations: in both settings the paternal will is absolute will, mediated in both the society and the family by a forced consensus based on ritual and coercion," Mr. Sharabi wrote in a book that is banned in much of the Middle East and North Africa.

He reasoned that Arab regimes franchised repression so that in a cultural patrimonial society, the oppressed participated in their repression and denial of rights. The regime is in effect the father of all fathers at the top of the pyramid. In the words of Egyptian journalist Khaled Diab quoted by journalist Brian Whitacker in a book exploring the nature of Arab society, Egypt's problem was not simply an aging president with little to show for himself after almost thirty years in power, but the fact that "Egypt has a million Mubaraks” including many players who see the ruler or the power behind the throne as a father figure.

Al Ahli said the ban that bars Mr. Abd El-Zaher from playing in next month’s FIFA Club World Cup in Morocco was “due to the club’s rejection of mixing of politics with sports” and illustrated its “commitment to FIFA rules” that ban expressions of political or religious views on the pitch. It said that Mr. Abd El-Zaher would be "prevented from representing the club and will not get any bonuses.”  The club said the ban was imposed after officials had interrogated Mr. Abd El-Zaher, who was first suspended immediately after his demonstrative gesture.

Initially, Mr. Abd El-Zaher said his gesture was intended to express sympathy for those killed during the eviction of protesters on Rabaa al Adawiya Square. His agent, Mohammed Shiha, told Ahram Online that Mr. Abd El-Zaher’s “behavior was only to show solidarity with one of his friends who died in Rabaa.” The player has since apologized for his action, telling Egyptian sports news website Filgoal.com: “I inserted Al Ahli in a political debate, I shouldn’t have done so.”

His banning came a day after EFA said that it would interrogate Mr. Abd El-Zaher and a statement by sports minister Abouzeid that “dissuasive sanctions await the player by his club and the soccer association.” Mr. Abouzeid said that he was sure that Al Ahli and the EFA would make “the right decisions”.

The banning of Mr. Abd El-Zaher puts the spotlight on the fact that the sport world’s notion of a separation of sports and politics in effect allows autocracies to strengthen their control. Autocratic rulers in Egypt and across the Middle East and North Africa have historically used the soccer pitch to curry popular favor, polish their often tarnished images, and prevent the pitch from becoming an opposition rallying point. They are frequently able to do so because FIFA refrains from ensuring adherence to its own rules and regulations by turning a blind eye to the fact that Arab autocrats and members of ruling elites effectively control clubs directly or indirectly.

Some analysts questioned meanwhile whether the EFA had the authority to penalize Mr. Abd El-Zaher given that the match against the South Africans had been organized by the Confederation of African Football (CAF), the regional soccer body. They note that it was CAF rather than the EFA that in 2008 sanctioned Mr. Abd El-Zaher’s team mate, Mohammed Aboutreika, for flashing a pro-Palestinian T-shirt during an African championship match against Sudan. The match was played at a time that Israel and Hamas were fighting a war in Gaza.

The politics of Al Ahli’s game against the Orlando Pirates were further evident in the fact that a victory for the Egyptian club in a game without incidents was important to Egyptian military strongman General Abdel Fattah al-Sisi after Egypt’s earlier failure to progress to next year’s FIFA World Cup finals in Brazil. Regime critics compared Ghana’s crushing of the Egyptian national team on the soccer pitch earlier this month to Israel’s thrashing of the Egyptian military during the 1967 Middle East war. Egypt is scheduled to play Ghana in the second leg of the qualifier with no hope of scoring sufficient goals to as yet qualify for Brazil in Cairo on November 19, the day General Al-Sisi celebrates his birthday.

General Al-Sisi’s efforts to counter Ghanaian demands that the match be moved to a neutral venue because of Egypt’s political volatility suffered a setback when Al Ahli fans even before Mr. Abd El-Zaher made his gesture clashed with security forces immediately before the game against the South Africans. The fans chanted slogans and raised banners during the match commemorating 74 of their comrades who died last year in a politically-loaded brawl in Port Said. The brawl is widely believed to have been an attempt by the military and the security forces that got out of control to teach the militant fans, one of Egypt’s largest civic groups, a lesson and curb their political activism.

The Al Ahli fans were the first to be allowed to attend a match in Egypt since the Port Said incident in February 2012. Authorities believed that allowing them into the stadium constituted a lower risk than barring them from entry. Al Ahli fans had earlier vowed to force their way into the stadium. The clashes with security forces and the slogans and banners contrasted starkly with the image of a return to political stability that the military-backed government hoped the African club cup championship final would project.

James M. Dorsey is a senior fellow at the S. Rajaratnam School of International Studies, co-director of the University of Würzburg’s Institute for Fan Culture, and the author of The Turbulent World of Middle East Soccer blog and a forthcoming book with the same title.
Al Ahly (Egypt) EFA Egypt FIFA Ultras