Ultras and Egyptian security forces gear up for renewed confrontation 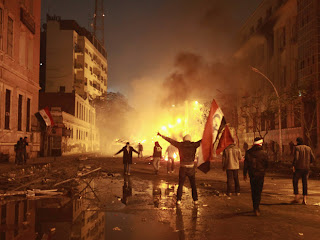 With the lifting of a seven-month ban on professional soccer, militant Egyptian fans and security forces are gearing up for a new round of street battles during the country’s Super Cup final on Sunday, the first domestic match since February.

At stake in the escalating conflict are core issues that prompted the militants or ultras – highly politicized, well-organized, street battle-hardened soccer fans – to play a key role in last year’s overthrow of president Hosni Mubarak and violently oppose post-Mubarak military rule: corruption, police and security force brutality, lack of reform of the security forces and the barring of spectators at matches.

Expectations that Mohammed Morsi, the Islamist who replaced the military in July after winning Egypt’s first free and fair election, will tackle the police and security forces, widely despised as the corrupt enforcers of the repressive Mubarak regime, are running high after he last month sidelined senior military leaders to regain executive and legislative powers.

Reforming the police, who fought soccer fans – the second largest, most organized group in Egypt after the Muslim Brotherhood -- for the four years prior to Mr. Mubarak’s downfall for control of Egypt’s stadium, is likely to prove far more difficult than sidelining country’s two most senior military commanders with the help of the next echelon of officers. Reform will have to mean changing the culture of a force that counts 450,000 policemen and 350,000 members of the General Security and Central Security Forces, which both fall under the dreaded interior minister. That is no mean task.

Just how big the gap is between a popular yearning for change and security forces that brutally crushed any opposition to Mr. Mubarak and forced residents in poor neighborhoods to pay them bribes was evident at Mr. Morsi’s presidential swearing in ceremony. Reuters news agency quoted police officials as saying "He is your president, not ours" and "how can a man we had arrested not very long ago suddenly become a president over us?" referring to the jailing of Mr. Morsi under Mr.  Mubarak's rule.

A slow moving trial against 74 people, including nine security officials, on charges of having been responsible for the death of 74 soccer fans of crowned Cairo club Al Ahly SC in a politically loaded brawl in February has done little to convince the fans and the broader public that Mr. Morsi will be able to reform what is seen as a bastion of the ancien regime. The proceedings were postponed on Wednesday until September 17 to allow the court time to review a request by the defense to replace the judge. The brawl, which widely was believed to have been provoked by security forces in a bid to punish the ultras for their role in the ousting of Mr. Mubarak and violent opposition to the military, sparked the banning of soccer for most of this year,

To their credit, Mr. Morsi and his sports minister, El-Amry Farouq, this month overruled interior ministry opposition to lifting the ban on soccer. The victory came at a price that is fuelling the conflict with the ultras: soccer matches are to be played in military stadiums behind closed doors without spectators.

Nevertheless, interior ministry officials have privately vowed to thwart efforts by Mr. Morsi’s interior minister, Ahmed Gamal el-Din, a respected career police officer to bridge the gap between the police and security forces and the public and the fans. Mr. El-Din gained credibility by liaising with the militants and the protesters during last year’s 18 days of mass demonstration that forced Mr. Mubarak from office. Since recently taking office, Mr. El-Din has removed several senior commanders, sent an officer to a disciplinary committee for mishandling complaints and paid unscheduled visits to police stations.

Militant soccer fans have been warning for months that they would return to their violent tactics if justice was not meted out in the Port Said case. The militants have made further clear that their battle is about far more than revenge for the deaths of the 74 comrades. As far back as February, the Al Ahly support group said in a statement on its Facebook page that has some 255,000 followers, that its defiance served to deliver a message to “all remnants of the ousted regime” that they would not obey their “manipulated regime.” The statement laid out the ultras’ agenda. “The issue is bigger than football. We want to settle the score with remnants of the former regime,” the statement said.

The ultras this week expressed their lack of confidence in the Port Said-related legal proceedings as well as reform of the police and security forces in statements and actions. In a statement on their Facebook page, Ultras Ahlawy warned that “we remained silent for seven months, during which we were committed to peaceful ways to ask for the rights of 74 martyrs who died in the world’s worst football tragedy. Now, after seven months, we call on everybody to revolt against the football system before action is resumed. We also call on fellow Ultras groups to reunite and support us in our demands.”

On Tuesday, ultras stormed the ground where Al Ahly players were training with a banner rebuking them and the club’s management for agreeing to Sunday’s Super Cup final against ENPPI. A day later they attacked the headquarters of the Egyptian Football Association (EFA) after EFA spokesman Azmy Megahed challenged them saying, "my message to those who oppose the league resumption is: if you can do anything to stop it, just do it."

The ultras are certain to insist on meeting a list of demands they issued while storming the EFA offices in protests at Sunday’s match, possibly by seeking to force their way into the stadium. They have also called for protests on Cairo Mohammed Mahmoud’s street close to the fortified interior ministry where last year at least 40 people were killed and more than a 1,000 injured in almost a week of vicious street battles with security forces.

The demands reflect the ultras’ determination to cleanup Egyptian soccer and media, whom they accuse of fanning the flames of confrontation, and force reform of the security forces. They include taking responsibility for security in the stadiums away from the interior ministry; allowing fans to attend all matches; the resignation of the boards of the EFA and Al Ahly; and the withdrawal of the candidacy of Mubarak era officials, among whom world soccer body FIFA executive committee member Hani Abou-Reida, as candidates in upcoming EFA elections.

American University of Cairo (AUC) political scientist Rabab El Mahdi believes that the most recent developments reflect the ultras’ politicization. “There is power in numbers. As the events of (last year’s mass protests on) January 25 unfolded, they realized that power does not lie with the elite. The masses had the upper hand, and they constituted a good majority,” Ms. El Mahdi told AUC’s newsletter.