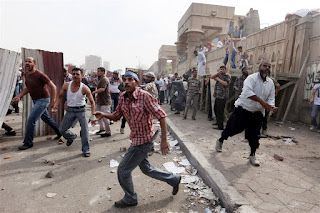 It took Egypt’s military brass less than six months to first isolate street-battle hardened soccer fans, the country’s most militant opponents of military rule, and then restore their waning popularity amid mushrooming protests demanding an immediate return of the armed forces to their barracks and a transition to civilian government.

The ultras– militant, highly politicized, violence-prone soccer fans modeled on similar groups in Italy and Serbia – chanting "Where are the Baltagiya (thugs)? The Revolutionaries are here" and “Tantawi is Mubarak,” joined this weekend thousands of protesters in a confrontation with security forces in Cairo near the defense ministry.

The timing of the protest could not have been more symbolic – the 84th birthday of ousted President Hosni Mubarak with whom the protesters have come to equate Field Marshall Mohamed Hussein Tantawi, the head of the ruling Supreme Council of the Armed Forces (SCAF).

The health ministry said a soldier was killed and more than 400 people injured in clashes between the protesters and security forces barely three weeks before the first scheduled presidential elections since the toppling of Mubarak more than a year ago. A group of doctors aiding wounded protesters said two demonstrators had died of shotgun wounds.

The government declared a night curfew in the area around the defense ministry in Cairo’s Al Abbasiya neighborhood.  Similar protests occurred in other Egyptian cities, including Alexandria and Suez. An effort by protesters to defy the curfew was repelled in part by residents of Abbasiya, a stronghold of support for Mubarak and the military.

The joining of forces of Salafists – proponents of return to life as it was at the time of the Prophet Mohammed --, Islamists, youth and left wing groups and ultras in their demand for an end to military rule in defiance of a warning by SCAF that it would not tolerate protests near the defense ministry or military facilities symbolizes the military’s misreading of the public mood.

The coming together of protesters of all walks of life was a far cry from the scene in late November and early December when protesters on Tahrir Square first called on the ultras to protect them against attacks by security forces but then abandoned them as they fought vicious street battles with the police in a street just off the square. Some 50 people were killed at the time in the fighting and more than a thousand wounded.

The then isolation of the youth groups and ultras – respected for their years of resistance in the stadiums to Mubarak’s brutal security forces and celebrated for their key role in toppling the hated leader -- reflected growing protest weariness at a time that the public retained confidence in the military despite its brutality, was frustrated by the lack of economic fruits of their popular revolt and longed for a return to normalcy that would put Egypt back on the path of economic growth.

The ultras’ increasing marginalization was evident in their lonely battle in recent months to demand justice for the 74 soccer fans killed in early February in a soccer brawl in Port Suez, the worst incident in Egyptian sporting history that was widely seen as an effort by the security forces to teach the militants a lesson. Security forces failed to intervene in the brawl in which pro-government thugs armed with sticks and knives were believed to have been involved. The government has charged 61 people, including nine security officials, with responsibility for the incident. The incident led to the cancellation of this season’s top two soccer competitions. A majority of the dead were supporters of Al Ahly SC, Egypt and Africa’s foremost soccer club.

A series of unpopular measures widely seen as an effort by the military to manipulate the outcome of the presidential election to ensure that a civilian-led Egypt is governed by a president and government sympathetic to safeguarding the role of the armed forces in politics and its stake in the economy and shield them from external oversight has over the past week brought protesters back in to the streets in ever growing numbers.

The measures included the banning of popular Islamist politicians and others from standing for president and culminated in an attack by thugs on anti-military protesters last Wednesday that left 11 people dead, some of them shot, others reportedly with their throats slit. Like in the case of Port Said, few doubt that the military at the very least had turned a blind eye to aggression by unidentified pro-regime thugs.

The mounting tension has strengthened the resolve of the ultras to force justice for their fallen comrades in Port Said and press for an end to military rule. In a show of unity in March, ultras of crowned Cairo arch rivals Ahly and Al Zamalek SC warned that they would sacrifice their lives to achieve their goals.

The statement at the end of a historic meeting between the two groups who have bitterly fought each other since their inception in 2007 suggested a sea change in Egypt’s soccer politics and a cementing of relationships among rival groups that have the organization and street battle experience to turn the military’s effort to mold Egypt in its image into a bitter and bloody struggle.

State-owned Al Ahram newspaper warned earlier this year that the ultras were “a time bomb ticking due to lack of justice for fallen comrades following the Port Said disaster.”

In a statement almost two months after the Port Said incident, Ultras Ahlawy said: “You can call us thugs, you can call us crazy, but we will be crazy to regain our rights, either through legal avenues or with our bare hands. We are ready to die for our rights; we are ready to add to the toll of 74 deaths.”

The ultras bring to the demonstrations against the military in Al Abbasiya the same degree of fearlessness, recklessness and abandon that they brought to last year’s mass protests on Tahrir Square that forced Mubarak to resign after 30 years in office.

"The government has turned the ultras into their enemy. That was a mistake. The ultras are passionate; they don’t have a specific agenda and don’t want to be labeled politically. They go into battle with abandon impervious to what it may produce,” said Mohammed Gamal Bashir aka Gemyhood, a founder of the UWK and author of a recent Arabic-language book about the ultras who is widely seen as the movement’s Egyptian godfather.

James M. Dorsey is a senior fellow at the S. Rajaratnam School of International Studies at Nanyang Technological University in Singapore and the author of the blog, The Turbulent World of Middle East Soccer.
Al Ahly (Egypt) Al Zamalek Egypt Ultras