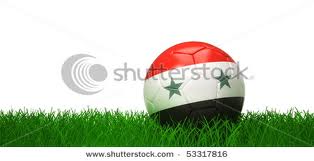 Syrian soccer kowtows to Assad regime
By James M. Dorsey
A recent Lebanese-Syrian Asia Cup qualifier serves as an ironic barometer of troubled relations between the two countries seeking to chart their individual futures as well as that of their uneasy relationship.
Soldiers armed with machine guns controlled the entrances to the Rafik Hariri Stadium where the match was being played in the southern Lebanese city of Sidon named after a prime minister who was assassinated in 2005 allegedly with tacit Syrian complicity if not active participation. A United Nations tribunal last year indicted four members of Syria’s foremost Lebanese ally, Shiite militia Hezbollah, on charges of killing Mr. Hariri in a massive car bombing. Both Syria and Hezbollah have repeatedly denied involvement in the death of Mr. Hariri.
The killing of Mr. Hariri sparked massive anti-Syrian demonstrations that forced Damascus to withdraw its troops after 30 years from Lebanon. It also paved the way for the formal establishment of diplomatic relations between the two countries after Syria dropped its refusal to formally recognize Lebanon as an independent state rather than a part of Greater Syria. Syria accredited Lebanon’s first ambassador to Damascus days before the match and welcomed a rare visit to Damascus by the Lebanese defence minister Elias Murr, who blames a failed 2005 attempt on his life on Syrian intelligence.
The massive security operation in a stadium bereft of spectators reflected the near civil war in Syria where a brutal government crackdown has failed to repress a ten month-old popular uprising against the regime of President Bashar al-Assad as well as the ripples of the revolt in Lebanon as a result of Hezbollah’s unqualified support for the Syrian leader.
Nevertheless, the very fact that Syria allowed its national team to travel abroad and that the match was the first in many years to be played on Lebanese soil rather than on neutral ground elsewhere in the Middle East speaks volumes about Syria’s relationship with Lebanon, one of only three Arab League countries to have voted against sanctioning the Assad regime for its brutality. More than 5,000 people are believed to have died in Syria since the uprising began in March of last year.
The fact that Syria allowed its national soccer team to Lebanon contrasts starkly with Syria’s refusal late last year to participate in the Arab Games in Bahrain for fear that some of its athletes might defect and confidence that Lebanon would not welcome any player seeking asylum.
Only two Syrian soccer players – national Under-23 goalkeeper and music composer Abd al Basset Saroot, a leader in the rebel stronghold of Homs, and national team goalkeeper Mosab Balhous who reportedly has been incarcerated since August on charges of sheltering armed gangs and possessing suspicious amounts of money – are known to have joined the revolt against Mr. Assad’s regime.
Syria placed its confidence in Lebanon despite deep-seated distrust between the two countries spilling regularly onto the soccer pitch. Suggesting that the Assad regime was so desperate for a victory in a bid to shore up its tarnished image, Lebanon accused Syria in November of fielding six players in an Under-19 Asian Football Championship qualifier whose ages had been falsified to qualify them for the team. The incident came two months after world soccer body FIFA barred Syria from competing for the 2014 World Cup in Brazil after the country’s national team fielded an unnamed ineligible player in a qualifying match against Tajikistan.
Syria, despite beating Lebanon 2:0 in this week’s Asia Cup qualifier, attacked Lebanon for its lack of hospitality and for having caused eight Syrian players to have food poisoning.
"We were treated with intentional carelessness by our hosts. There is no excuse for it, and brotherly countries should not be dealt in that way," Syrian Football Association executive Bahaa al-Omary told the BBC.
The Syrian defeat of Lebanon put paid to a rare moment of Lebanese unit sparked in a country where almost every facet of life is defined by its sectarian fault lines by the Lebanese team’s defeat in December of South Korea in a 2014 World Cup qualifier. The estimated 60,000 fans in Beirut’s Cite Sportive stadium shifted from sectarian chants to egging on their team with roars of “Minshan Allah, Libnan yallah” – “For God’s Sake, Lebanon Come On” – as soon as the Lebanese scored their first goal.
The fan support boosted Lebanese soccer, devastated by a ban on fans attending league matches in the wake of Mr. Hariri’s killing that was only lifted in October. As a result, Lebanon’s domestic league has all but collapsed and the national team drained of potential talent
“Politics came into football and destroyed it,” said Rahif Alameh, secretary-general of the Lebanese Football Association, who dates the “death of football” to 2001, the year when the government intervened in a murky match-fixing scandal rather than the 2005 ban on fans. That was when Lebanon’s political-religious leaders began treating the association as a pie to be carved up, just as they share power among Muslim and Christian communities.
Mr. Hariri, for example, sponsored several clubs and bought Nejmeh soccer club, Lebanon’s most popular team, which was largely cross-sectarian, but had always attracted much Shiite support. Mr. Hariri initially ventured into sports as a moneymaking venture, but later turned his teams into vehicles for consolidating his Sunni Muslim support.
Similarly, virtually every Lebanese soccer club is identified in sectarian and political terms — Maronite Christian, Sunni, Shiite, Druze or Armenian with certain political factions — even if the team’s players are religiously mixed.
“Football had just (become an extension) of politics. Everything in Lebanon is politicized, the air we breathe is politicized,” The Associated Press quoted Mr. Alameh as saying.
James M. Dorsey is a senior fellow at the S. Rajaratnam School of International Studies at Nanyang Technological University in Singapore and the author of the blog, The Turbulent World of Middle East Soccer.
Asia Cup Lebanon Syria World Cup 2014