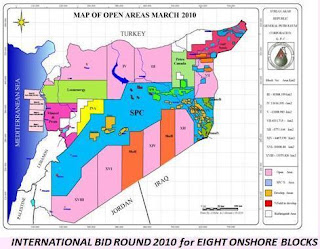 (Source: Pipeline Magazine)
By James M. Dorsey
Mark Twain’s warning that “the reports of my death are greatly exaggerated" must be on Syrian president Syrian president Bashar al Assad’s mind as his country braces itself for European sanctions on his country’s oil exports.
Despite the tightening noose with Western nations this week calling for him to resign and seeking to increase the pain, Mr. Assad has substantial political life left in him and is unlikely to halt his brutal crackdown on anti-government protesters any time soon.
European oil sanctions coming in the wake of similar sanctions announced by the United States and Canada will no doubt be the first that the Syrian leader has to take serious since Western nations began targeting Mr. Assad and his close associates earlier this year. Much of Syria’s 400,000 barrels a day in oil exports that fund a third of the budget of Mr. Assad’s government flow to refineries in France, Germany, Italy, and the Netherlands.
The sanctions, however, are unlikely to be crippling as long as countries like China and India appear able and willing to take over the European contracts; Syria’s closest friend, Iran, continues to support Mr. Assad’s regime; and the president is able to dip into an estimated $18 billion in reserves.
Nonetheless, the writing is on the wall even if Mr. Assad’s demise is not imminent.
Tightening the noose around Mr. Assad’s neck is a slow, gruelling process, but the brutality of the crackdown and the regime’s failure to squash the protests is gradually forcing those powers most reluctant to concede that Mr. Assad should go to give ground.
Russia and the Arab League led by Saudi Arabia earlier this month condemned for the first time since the protests erupted five months ago the regime’s violence and called on Mr. Assad to embark on a road of political and economic change. Together with China, they endorsed a statement by the president of the United Nations Security Council in that vein.
All of this does little to stop the bloodletting, but if developments this month show anything, it is that the mounting casualty figures, the regime’s increasing brutality and the protesters’ resilience and perseverance makes it increasingly difficult for nations to turn a blind eye.
Mr. Assad has boxed himself into a corner in which he is damned if he does and damned if he doesn’t. Making the concessions in terms of political and economic reform that would end the protests would hand his opponents victory, significantly undermine his position and could prompt hardliners within his regime to push him aside in a bid to salvage their own hides. Continuing the crackdown on the other hand will make it increasingly difficult for nations that so far have opposed hitting Mr. Assad where it hurts to oppose effective sanctions.
Turkey is one nation that increasingly is feeling the heat. Turkey this week publicly rejected US and European calls for Mr. Assad to resign. Yet, Turkey, which has been aggressively projecting itself politically and economically in the Middle East and North Africa and has sought to nudge Mr. Assad towards reform with improved trade and diplomatic relations, is seeing the fundaments of its foreign policy fall apart.
Turkey’s principle of zero problems with its neighbour has been shattered Mr. Assad who much to the chagrin of Turkish Prime Minister Recep Tayyip Erdogan has refused to follow his erstwhile friend’s advice. Turkey has since repeatedly warned that it could not stand idly by as the bloodshed in Syria continues but when push comes to shove has been unable or unwilling to put its money where its mouth is.
One reason Turkey has been reluctant to call for Mr. Assad’s downfall or take steps to bring the Syrian president’s demise any nearer is concern that such a move could disrupt its relations with Iran. Turkey depends on the Islamic republic for the supply of natural gas, the transit of Turkish goods to Central Asia and cooperation in its battle against Kurdish insurgents.
The jury on whether Iran will support Mr. Assad to the bitter end is still out despite widespread expectations that increased pressure will drive Syria and Iran even closer together because Iran is the only country with a real vested interest in the Syrian president’s survival. Iran has significant economic interests in Syria, depends on it as a conduit for its support of Lebanon’s Hezbollah Shiite Muslim militia and increasingly sees Syria as a frontline in its rivalry with Saudi Arabia.
Nonetheless, Iran is unlikely to bet on a dying horse at the risk of forfeiting any chance of a beneficial relationship with whoever may succeed Mr. Assad. While Iran is unlikely to ever publicly back away from its support for Mr. Assad, it is showing cautious signs of wanting to keep its options open. An Iranian newspaper with close ties to Spiritual Leader Ayatollah Ali Khamenei recently warned that violence would not solve Mr. Assad’s problem and called on him to entertain the protesters’ demands.
Mr. Assad has for now substantial rope left. Ultimately, however, he is bound to get the shorter end of the stick. He knows perhaps better than anyone that he is not there yet. With his back against the wall, however, he is likely to see no alternative but to fight his way out no matter the cost in terms of his people’s lives, his country’s economy, and his chances of political survival.
James M. Dorsey is a senior fellow at Nanyang Technological University's S. Rajaratnam School of International Studies and the author of the blog, The Turbulent World of Middle East Soccer.
Arabs China Iran Russia Saudi Arabia Syria US