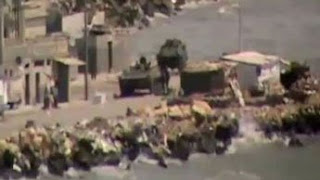 Syrian forces detain protesters in Latakia’s stadium (source France 24 /wires)
By James M. Dorsey
Syrian president Bashar al Assad has highlighted the symbolic role of soccer pitches in the Middle East and North Africa with the herding this week of hundreds, if not thousands, of anti-government protesters into the stadium of the country’s main port city of Latakia where their identification papers and cell phones were taken from them.
The herding into the Latakia stadium as well as Mr. Assad’s use of stadiums as detention centers in other beleaguered Syrian towns evokes memories of his father’s 1982 assault on Hama to crush an uprising by the Muslim Brotherhood in which at least 10,000 people were killed. A 1983 Amnesty International report charges that the city’s stadium was used at the time to detain large numbers of residents who were left for days in the open without food or shelter.
In employing stadiums as detention centers, Mr. Assad joins a list of the region’s brutal rulers who have turned soccer stadiums into potent symbols of political struggle, killing fields and memorials to those who were abused, tortured and often killed for anything from having failed to perform on the soccer pitch to demanding their political rights.
US and Iraqi forces discovered mass graves in several Iraqi stadiums after the 2003 overthrow of Saddam. Uday Hussein, the deposed Saudi dictator’s sadistic son, humiliated players for a missed penalty or errant pass by having their heads publicly shaved in Baghdad’s Stadium of the People. Football legend and former Iraqi goalkeeper Hashim Hassan recalls being forced after losing a 1997 World Cup qualifier against Kazakhstan to lie with his whole team on the stadium’s grass where they were beaten by Uday’s goons with sticks on their feet and backs before being imprisoned for a week. 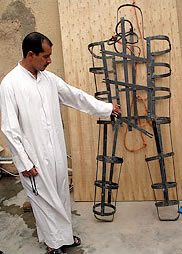 A device used by Odai Hussein to torture Iraqi soccer players (Source: cultureofsoccer.com)
Amnesty International quotes an Iraqi army deserter as describing how he was one of a number of deserters who was taken to a soccer stadium in Basra for execution in 1986. The deserter lost consciousness and was assumed to be dead. He was the only survivor. He regained consciousness in a van transporting the bodies of the victims. He escaped but was later recaptured and sent back to his army unit where he deserted for a second time.
US-led international forces played shortly after their 2001 overthrow of the Taliban soccer against an Afghan team in Kabul’s Ghazi Stadium to highlight the change they were bringing to the war-ravaged country. The stadium had been used by the Taliban for public executions. Afghans believe it is still haunted by the dead and are afraid of entering the stadium after dark. Even the night watchmen limit their patrol’s to the stadium’s parameter.
Christian militia men responsible for the 1982 massacres in the Beirut Palestinian refugee camps of Sabra and Shatilla to which Israeli invasion forces turned a blind eye converted a local soccer stadium into an interrogation center and  execution ground. Some 800 Palestinians were killed in the two camps.
Libyan leader Muammar Qadaffi adorned his country’s stadiums with quotes from his Green Book that explains his idiosyncratic theories of democracy. Slogans like ‘Sports and Arms Belong to the People” and “Parties Abort Democracy” greeted visitors at the entrance to stadium in Benghazi until anti-Qaddafi rebels took control of the city earlier this year.
Somali jihadist used the capital of Mogadishu’s stadium -- once one of East Africa’s most impressive filled with 70,000 passionate fans during games – as an Islamist training and recruitment center until they were recently forced to abandon the city by African Union-backed government forces.
Resisting efforts by the region’s autocratic rulers to politically control stadiums in a bid to shore up their tarnished images by associating themselves with soccer and prevent the pitch from becoming opposition rallying points, fans from Algeria to Iran have turned them into venues to express pent-up anger and frustration, assert national, ethnic and sectarian identity and demand women’s rights. Weekly battles in Egyptian stadiums with security forces and rival fan groups prepared Cairo’s militant soccer supporters for clashes on the city’s Tahrir Square that forced Egyptian President Hosni Mubarak from office in February.
Syrian activists said residents of Latakia, particularly in the city’s A l-Raml district, which has been pummelled with tank, gunboat and automatic weapons, were forced to leave their homes and go to the stadium because the military was preparing to launch a major operation and possibly flatten the area. A refugee camp that is home to more than 10,000 Palestinians is part of the neighbourhood that has been a focal point of anti-government protests in the city. The United Nations agency responsible for overseeing Palestinian refugee camps has expressed concern and demanded unhindered access to the camp and the stadium.
The use of the Latakia stadium as a detention city after huge anti-government protests rocked the city on Friday follows mass detentions in soccer stadiums in Dera’a, where the five-month old uprising against Mr. Assad's rule began, and the coastal city of Baniyas. New York-based advocacy group Human Rights Watch quotes witnesses as describing some executions of prisoners in the Dera’a stadium.
"It's a continuation of a deliberate policy of the military crushing the protest movement. We've seen it now in so many cities," said Nadim Houry, Human Rights Watch's senior researcher for the Middle East and North Africa.
Syrian activists fear that Mr. Assad’s regime may use the detainees in the Latakia stadium as political pawns by either portraying them as proof of its claim that the military is fighting foreign-supported armed groups rather than a popular uprising or by forcing them to stage a demonstration in favour of the Syrian leader.
Latakia and the assault on the Palestinian camp has particular significance because Mr. Assad hails from a village southeast of the city. Mr. Assad has built his reputation on championing the Palestinian cause. His family and closest associates control the city's port and its finances.
"Syria is being targeted... by different means, to weaken its role in the resistance (to Israel) and in defending legitimate Arab rights," Mr Assad was quoted by the official state news agency on Wednesday as telling officials of his ruling Baath Party.
James M. Dorsey is a senior fellow at Nanyang Technological University's S. Rajaratnam School of International Studies and the author of the blog, The Turbulent World of Middle East Soccer.
Afghanistan Football Iraq Libya Soccer Syria