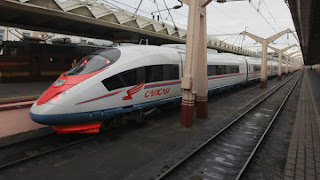 Sapsan high-speed train targeted (Source: The Moscow Times / RIA Novosti. Ruslan Krivobo)
By James M. Dorsey
Islam Khamushev played soccer as a kid with Muradom Edilbiyev and Muradom Umayev. As adults, the three childhood friends with roots in the northern Caucasus, a hotbed of Islamist militancy, planned to blow up the high speed Sapsan railway linking Moscow and St Petersburg.
Messrs Khamushev, Edibilyev and Umayev together with Fyarit Nevlyutov, the fourth member of their group, were arrested last month in Moscow but the charges and details of their plot were only released this week.
Russia’s Federal Security (FSB) detained them after following their preparations for the attack that could have resulted in a high number of casualties by tapping their telephones. Russian press reports quoted FSB director Alexander Bortnikov as saying that explosives, weapons and maps of targets were seized when the four were arrested.
Russian media reports said that 22 year-old Mr. Khamushev moved last year to a forest training camp in Dagestan to prepare for the attack where he linked up with Messrs. Edilbiyev and Umayev, with whom he played soccer in Moscow’s amateur Daimokkh and Darul Arkam teams. The team met Mr. Nevlyutov at a local Moscow mosque.
Darul-Arqam’s players are members of a Muslim society with the same name to which Mr. Edilbiyev belongs. Mr. Umayev’s club, Diamokhk, is predominantly Chechen.
Mr. Khamushev first broached the idea of the attack in June and the others quickly agreed, according to Russian daily Kommersant. The paper quoted Mr. Edilbiyev as agreeing because he recalled seeing as a 10-year old in 1999 in his native Chechnya federal forces “kill his mate” and how soldiers “grossly violated the rights of citizens of the republic.”
The arrest of the four men highlights jihadists’ love hate relationship with the beautiful game. Soccer has served jihadists as an important recruitment and bonding tool. It brings recruits into the fold, encourages camaraderie and reinforces militancy among those who have joined.
Jihadists like Messrs Khamushev, Edibilyev and Umayev often start their journey as members of groups organized around soccer. The perpetrators of the 2003 Madrid subway bombings played soccer together. Saudi players made their way to Iraq to become suicide bombers. Similarly, several Palestinian Hamas suicide bombers traced their routes to a mosque-sponsored soccer team.
Men like Al Qaeda leader Osama Bin Laden, who was killed by US Navy Seals in May, and Hamas leader Ismail Haniyeh learnt the significance of soccer early on. They hail from a part of the world populated by authoritarian, repressive regimes in which soccer offered for much of their lives a rare opportunity for the expression of pent-up anger and frustration.
As a child, Mr. Bin Laden organized soccer games in poor parts of Jeddah, his hometown. In the 1990s, when he based Al Qaeda in Sudan, the group reportedly had two competing teams that maintained regularly scheduled practices and played weekly matches after Friday prayers.  Back in Afghanistan during the US-backed Islamist war against the Russians, the Afghan guerrillas and their foreign fellow travellers fought boredom in between battles with their own soccer tournament in which fighters competed in teams representing their countries of origin. Once the Soviets withdrew and foreign jihadists returned home, soccer matches offered an opportunity to stay in touch.
Ironically, Islamist leaders like Messrs Bin Laden and Haniyeh occupied a middle ground in the militant theological debate about soccer that runs the gamut from passionate advocacy to murderous rejection. Their enthusiasm for and endorsement of the game put them at odds with radical clerics who condemn the sport as un-Islamic and more in line with mainstream scholars who argue that the Prophet Muhammed advocated physical exercise to maintain a healthy body.
Soccer doesn’t fit into, for example the vision of an Islamist society advocated by Somalia’s Al Shabab or Afghan Taliban. In their view, it distracts the faithful from worshipping Allah, competes with the militants for recruits and lends credence to national borders at the expense of pan-Islamist aspirations. It also celebrates peaceful competition and undermines the narrative of an inevitable clash of civilizations between Islam and the West.
Despite their passion for soccer, men like Mr. Haniyeh or for that matter Hezbollah leader Hassan Nasrallah, as well as more mainstream, non-violent, ultra-conservative Muslims recognize a kernel of truth in the militant cleric’s religious rulings. Only soccer was until the eruption of the Arab revolt in December 2010 able to spark the same deep-seated emotion, passion and commitment that Islam evokes among a significant segment of the population of the Middle East and North Africa.
James M. Dorsey is a senior fellow at Nanyang Technological University's S. Rajaratnam School of International Studies and the author of the blog, The Turbulent World of Middle East Soccer.
Football Jihadists Russia Soccer