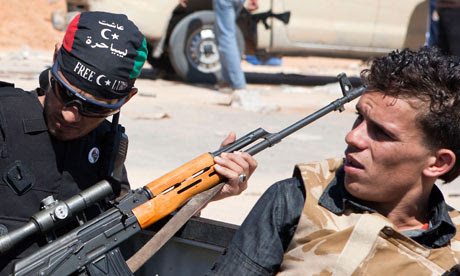 Libyan rebels in Zawiya claim to be in control of most of the town, which lies only 35 miles west of Tripoli. (Photograph: Giulio Petrocco/AP)
By James M. Dorsey
With NATO-backed rebel troops closing in on the Libyan capital Tripoli, Col. Moammar Qaddafi’s opponents are desperate to project a façade of unity, brush aside internal rifts and assure Libyans and the international community that they are capable of managing transition in a post-Qaddafi era.
To do so in the wake of the mysterious killing last month of rebel military commander General Abdel Fattah Younis, the rebel Transition National Council (TNC) has moved to reshuffle its leadership, revamp its plans for governing Libya after Mr. Qaddafi’s fall, draft a timeline for post-Qaddafi elections, unify its disparate armed groups and plan for establishing a security force once Tripoli has been captured.
Gen. Younis, a former interior minister and head of special forces who defected in February, is believed to have been killed by anti-Qaddafi fighters while on his way to the rebel capital of Benghazi for questioning about his alleged contacts with the Libyan regime.
The killing is rumoured to have occurred with the support of some members of the TNC leadership. As a result, the general’s death has sparked anger among his powerful Obeidi tribe that has threatened to avenge his killing if the TNC fails to bring his murderers to justice.
The rift within rebel-held eastern Libya as well as within the TNC itself echo fissures with rebels in western Libya that reflect the two region’s different histories and political cultures. It raises the spectre of a rebel victory over Qaddafi’s forces disintegrating into tribal warfare and an orgy of violence as occurred in Iraq after the fall of Saddam Hussein. It has also sparked fears of retaliation against perceived supporters of the Libyan leader fuelled by a series of recent incidents in rebel-held areas.
The rebels, in an effort to reassure its NAT0-backers who last month together with the Arab League recognized the TNC as the sole legitimate representative of Libya, have leaked details of their 70-page plan for governing Libya and preparations to cope with the turmoil expected to follow the fall of Mr. Qaddafi.
The plan was drafted with the help of experts from the United Nations, the United States, Europe, Canada and Turkey and is inspired by a desire to avoid the experience in Iraq where the disbanding of Mr. Hussein’s military unleashed a wave of brutal violence.
At the same time, acting in close consultation with the rebels, Qatari officials have in recent days held talks with defectors from the Libyan leader’s regime living in exile in the Gulf state, including former foreign minister and intelligence chief Moussa Koussa and former oil minister Shokri Ghanem.
The plan calls for the TNC’s leadership council to be expanded to 65 members, 25 of which would be appointed from areas currently still under Mr. Qaddafi’s control. It bans council members from running in the first two national elections or accepting political office in the governments that would emerge from those polls.
To ensure security and law and order, the plan calls for the creation of a rapid response force to be deployed in Tripoli that would be made up of rebels primarily from western Libya as well as security officials in the capital believed to have been sympathetic to the rebels’ cause. The force together with Arab peacekeepers would be charged with securing Tripoli immediately after Mr. Qaddafi’s fall.
The plan envisions that the expanded TNC would be in power for eight months. Its main task would be the organization of elections for a committee that would draft a new constitution and a 200-member interim national congress. The TNC would be succeeded by the congress that would have a year to put the draft of a new constitution to a referendum after which elections would be held on the basis of which a government would be formed.
Molding the rebels’ rag tag forces and remnants of Mr. Qaddafi’s police and security forces into a unified, integrated unit that enjoys public support is likely to be easier said than done. If the experience in Egypt and Tunisia is anything to go by, the force is likely to encounter popular distrust because of the history of many of its members as Mr. Qaddafi’s henchmen against whom Libyans fought a bitter war to oust the Libyan leader.
Creating a trusted security force and avoiding Iraqi-style violence is just one of a host of immediate problems that Libyans and the international community will have to address once Mr. Qaddafi has been removed from power. In addition to ensuring security, the TNC will have to ensure basic services such as food, water and energy; revive oil exports to ensure funding for the new administration; and kick start Libya’s stagnating economy.
All of this will have to happen in a country that lacks institutions as a result of Mr. Qaddafi’s reliance on traditional tribal structures. That is a tall order but the alternative is a wave of bloody violence that is unlikely to bring Libyans any closer to their goal of greater political freedom and economic opportunity for which they have fought hard.
James M. Dorsey is a senior fellow at Nanyang Technological University's S. Rajaratnam School of International Studies and the author of the blog, The Turbulent World of Middle East Soccer.
Libya