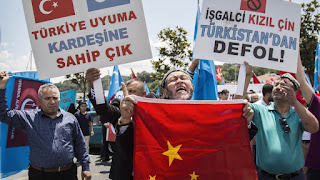 A Turkish-Chinese spat as a result of Turkish criticism of China’s crackdown on Turkic Muslims in its strategic but troubled north-western province of Xinjiang complicates efforts by Kazakhstan and other Central Asian states to at best deal quietly behind closed doors with the plight of their citizens and ethnic kin in the People’s Republic.

China’s threat that the Turkish criticism of its massive surveillance and detention campaign, involving the alleged incarceration in re-education camps of up to one million Uyghurs and other Turkic Muslims would have economic consequences and the temporary closure of the Chinese consulate in the Mediterranean port city of Izmir serves as warnings to others in the Muslim world what could happen if they break their silence.

The Chinese effort to get the Muslim and broader international community to maintain silence, if not acquiesce in the crackdown that constitutes the most frontal assault on Islam in recent history, was boosted when Saudi crown prince Mohammed bin Salman on a visit to Beijing last month appeared to endorse Chinese policy.

Prince Salman’s endorsement of China's right to undertake "anti-terrorism" and "de-extremism" measures was widely seen as tacit support for the crackdown by the custodian of the holy cities of Mecca and Medina.

China has denied allegations of widespread abuse of human rights and insisted that the camps are re-education and training facilities that have stopped attacks by Islamist militants and separatists.

The crown prince’s remarks contrasted starkly with the characterization last month of the crackdown by Turkey’s foreign ministry  as an “embarrassment to humanity,” The ministry demanded that Chinese authorities respect the human rights of the Uyghurs and close what it termed “concentration camps.”

Turkish foreign minister Mevlut Cavusoglu called twice last week on China to make a distinction between perpetrators of political violence and innocent civilians while insisting that Turkey wished to continue cooperation with the People’s Republic.

“The fact that we have a problem with China on an issue should not necessarily hinder our cooperation on other matters,” Mr. Cavusoglu said.

Turkey is hoping that Chinese investment in nuclear, e-commerce, finance, and infrastructure will narrow its gaping trade deficit with China that last year stood at US$17.8 billion.

That is not how China appeared to envision its future relationship with Turkey.

“There may be disagreements or misunderstandings between friends, but we should solve them through dialogue. Criticising your friend publicly everywhere is not a constructive approach,” said Chinese ambassador to Turkey Deng Li.

“The most important issue between countries is mutual respect. Would you stay friends if your friend criticized you publicly every day?” Mr. Deng asked.

“If you choose a non-constructive path, it will negatively affect mutual trust and understanding and will be reflected in commercial and economic relations,” Mr. Deng added.

Mr. Deng’s comments were not only designed to whip Turkey back into line but also to prevent Central Asian nations from speaking out despite mounting domestic pressure.

Mr. Deng’s comments reflected greater Chinese intolerance for criticism of its crackdown amid attempts to convince the international community by taking diplomats and journalists on carefully managed tours of Xinjiang that one participant called a “dog and pony show.”

The ambassador’s rings particularly loud in Kazakhstan whose ethnic kin constitute the second largest Muslim community in Xinjiang after the Uyghurs.

A former re-education camp employee, Sayragul Sauytbay, who fled to Kazakhstan told a Kazakh court last year that she was aware of some 7,5000 Kazakh nationals and Chinese of Kazakh descent being incarcerated.

Atajurt Eriktileri, a Kazakh group that supports relatives of people who have disappeared in Xinjiang, says it has documented more than 10,000 cases of ethnic Kazakhs interned in China. The Xinjiang Victims Database says it has collected some 3,000 testimonies of prisoners and their families, half of which are from ethnic Kazakhs.

Askar Azatbek, a former Xinjiang official who became a Kazakh citizen, went missing in December after allegedly having been kidnapped while on the Kazakh side of Khorgos, a free-trade zone on the border with China.

So has Qalymbek Shahman an ethnic Kazakh Xinjiang businessman who was refused entry into Kazakhstan, sent to Uzbekistan and disappeared in Thailand to where he was returned by Uzbek authorities. Mr. Shahman hasn’t been heard from since.

"I wanted to go to Kazakhstan, because China's human rights record was making life intolerable," Mr. Shahman said in a video tape from Tashkent airport before being forced to fly to Thailand, which has a track record of complying with Chinese repatriation requests.

For now, Central Asian leaders are walking a tightrope. Officially, they insist that Xinjiang is a Chinese internal affair. At the same time, the leaders are trying to curb domestic criticism.
Serikzhan Bilash, the head of Atajurt Eriktileri, was fined in February by an Almaty court for operating an unregistered organization.

Ms. Sauytbay has fired her lawyer after he became unreachable at key moments in her asylum application and encouraged her to not talk about it publicly. “I don’t want to talk…until I have some kind of protection. I’d prefer that protection to come from Kazakhstan, but I might need help from other countries,” Ms. Sautbay said.

Ms. Sautbay is certain to hope that Turkey’s willingness to confront China, if maintained, makes Central Asia’s tightrope act increasingly risky, particularly in an environment in which public criticism of the crackdown, anti-Chinese sentiment and social and economic discontent are meshing.