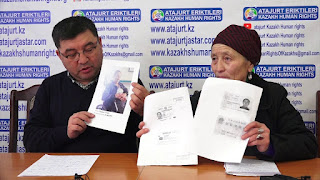 A police raid on a Kazakh group documenting the plight of Kazakhs and Uyghurs caught in a brutal crackdown in China’s north-western province of Xinjiang is about more than a government seeking to please Beijing in the hope that it improves the lot of its ethnic kin while preserving diplomatic and economic relations.

Amid suspicions that the raid on the offices of Atajurt Eriktileri and the arrest of activist Serikjan Bilash was carried out as a result of Chinese pressure aimed at squashing criticism of the crackdown, the raid seemingly reflects an increasingly aggressive Chinese effort to impose its will on others and ensure that they observe the respect and deference that China believes it deserves.

Atajurt Eriktileri supports relatives of people who have disappeared in Xinjiang and says it has documented more than 10,000 cases of ethnic Kazakhs interned in China.

Police on Sunday sealed the group’s office in Almaty, Kazakhstan’s largest city, seized the group’s computers and archives and flew Mr. Bilash, who said he was being accused of “inciting ethnic hatred, to the Kazakh capital of Astana.

The East Turkistan Awakening Movement, a Washington-based Uyghur exile group, said Mr. Bilash had been arrested on charges of "creating tensions between #Kazakhstan and #China."

The Kazakh police raid is but the latest incident pointing to China’s more aggressive form of diplomacy that includes an increasing number of undiplomatic comments by Chinese diplomats across the globe.

At times, those comments are couched in civilizational terms steeped in what political scientist Zhang Weiwei describes as the rise of the civilizational state under President Xi Jinping.

Describing the trend towards a civilizational state that involves a rejection of Western concepts, including notions of human rights and freedom of religion, Financial Times columnist Gideon Rahman noted that China was not alone in its embrace of the idea as an alternative to the traditional concept of a nation state based on national borders and language. Mr. Rahman suggested that the concept was also gaining currency in countries like India and Russia.

Chinese Foreign Minister Wang Yi defended his diplomat’s more outspoken statements by pointing to China’s need to stand up for its “rightful and lawful interests.” Mr. Wang insisted that China would not tolerate infringements of its sovereignty and national dignity.

“Chinese diplomats, wherever we are in the world, will firmly state our position,” Mr. Wang told journalists this weekend covering the National People’s Congress.

Examples of China’s more aggressive attitude abound while the Kazakh raid suggests that China’s concepts of deference and respect amount to far more than traditional notions of respect. They also provide a potential insight into the values and norms that in China’s view would undergird a new world order.

China’s notion of deference was put on display last September at the Pacific Islands Forum when Beijing’s ambassador to Fiji, Du Qiwen, allegedly demanded the right to speak before Tuvalu prime minister Enele Sosene Sopoaga. The forum’s host, Nauru president Baron Waqa accused the Chinese envoy of being “insolent” and a “bully.”

Both Nauru and Tuvalu, to China’s chagrin, maintain diplomatic relations with Taiwan.

Similarly, Papua New Guinea police were called after Chinese officials allegedly tried to force their way into the office of the country’s foreign minister in a bid to influence the final communique of last November’s Asia Pacific summit.

The summit ended without a final statement because of disagreements between the United States and China. Chinese officials dismissed the report of them having attempted to gain access to the foreign minister’s office as “a rumour spread by some people with a hidden agenda."

In an oped in The Hill Times, an Ottawa-based newspaper, Lu Shaye, China’s ambassador to Canada, described as “Western egotism and white supremacy” demands that China release two Canadian nationals arrested in China.

The two Canadians are being held in apparent retaliation for the detention in Canada at the behest of the United Sates of senior Huawei executive Meng Wanzhou on charges of having misled banks about the company’s business dealings with Iran.

A series of incidents in the wake of a visit to Sweden last September by the Dalai Lama involving Chinese tourists and a satirical Swedish television show that poked fun at Chinese visitors and excluded Taiwan and parts of Tibet from a map of China drew the ire of the Chinese embassy in Stockholm.

The embassy denounced Swedish police as “inhumane,” decried “so-called freedom of expression,” charged that the tv show “advocate(s) racism and xenophobia outright, and openly provoke(s) and instigate(s) racial hatred and confrontation,” and issued a safety alert to Chinese tourists because of multiple cases of theft and robbery and poor treatment by Swedish police.

In line with Mr. Wang’s justification of his diplomats’ more undiplomatic approach, Brookings fellow Ryan Hass told Bloomberg that the envoys were “matching the mood of the moment in Beijing… Some in Beijing also seem to be growing frustrated that China’s rising national power is not yet translating into the types of deference from others that it seeks.”

The raid in Kazakhstan, like earlier cases such as Egypt’s return at China’s request in 2017 of up to 200 Uyghur students to an uncertain future in the People’s Republic, suggests that Beijing maintains an intrusive, far-reaching definition of its concept of deference and respect.

Kazakh activists charged that the raid was indicative of the kind of pressure applied by China. “Our government doesn’t want to spoil relations between Kazakhstan and China,” said Atajurt’s lawyer, Aiman Umarova.

There was no independent confirmation of assertions that Chinese pressure prompted the raid.

In a video statement, Mr. Bilash confirmed that he was Kazakh police custody and had not been detained “by either the Chinese or Chinese spies”.

Mr. Bilash’s wife, Leila Adilzhan, said she was "afraid our government will give him to China."

That may be one step too far for the Kazakh government given mounting anti-Chinese summit among Kazakhs and public demands that Kazakhstan be more forceful in its standing up to China for the rights of Kazakh nationals and Chinese citizens of Kazakh descent. Kazakhs constitute the second largest minority in Xinjiang after Uyghurs.