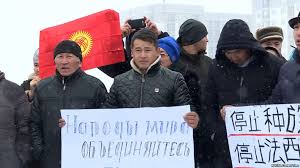 A heavy soup made of pulled noodles, meat, and vegetables symbolizes Central Asia’s close cultural and/or ethnic ties with China’s repressed Turkic and Hui Muslims. It also explains growing Central Asian unease with China’s re-education campaign in its north-western province of Xinjiang and its signature infrastructure and energy driven-Belt and Road initiative.

Named Ashlan Fu and introduced to Kyrgyzstan in the late 19th century by Dungans, exiled Chinese Hui Muslims who fled over the Tien Shan Mountains after a failed rebellion in 1877, the soup has become a staple of Kyrgyz cuisine.

It’s also indicative of the potential fallout of China’s crackdown on Turkic and increasingly Hui Muslims that amounts to the most frontal assault on Islam in post-World War Two history and of commercial terms underlying Belt and Road-related Chinese investments in Kyrgyzstan and Central Asia.

Some 150 members of Kyrgyzstan’s far right Kyrk Choro (Forty Nights) group last month protested outside the Chinese embassy in the Kyrgyz capital of Bishkek against the inclusion of ethnic Kyrgyz in the up to one million Muslims detained in re-education camps in Xinjiang as part of the Chinese crackdown.

In a sign of the times, Kyrk Choro, a nationalist group that has gained popularity and is believed to have the support of the Kyrgyz ministries of interior and labour, migration and youth, and the National Security Committee (GKNB), focused in its protest exclusively on ethnic Kyrgyz in Chinese detention.

Acting as vigilantes, Kyrk Choro four years ago raided clubs in Bishkek in a campaign against prostitution and accused Chinese nationals of promoting vice. In a video of an attack on a karaoke club, a Kyrk Choro leader showed a receipt that featured a girl as one of the consumed items.

Yet, while standing up for the rights of ethnic Kyrgyz and Kyrgyz nationals, Kyrk Choro has also called for Uighurs, the Turkic Muslims that populate Xinjiang, to be booted out of Bishkek’s most popular clothing bazaar and replaced by ethnic Kyrgyz.

During December’s protest, Kyrk Choro also demanded the expulsion of illegal Chinese migrants. It further insisted that the government check the documents of migrants, including those who had obtained Kyrgyz citizenship over the last decade, including 268 Chinese nationals who are in majority of Kyrgyz descent.

Kyrk Choro’s contradictory demands and claims reflect not only a global trend towards ethnic and religious nationalism with undertones of xenophobia but also concern that Belt and Road-related projects serve Chinese rather than Kyrgyz and Central Asian interests.

The Kyrgyz government recently reported that 35,215 Chinese citizens had arrived in the country in 2018, many of them as construction workers on Chinese-funded projects.

“One widely-shared image, which declares “Don’t let anyone take your land,” depicts a strong fist — adorned with a Kyrgyz flag — stopping a spindly hand — marked by a Chinese flag — from snatching factories and a field,” Ms. Wood wrote in The Diplomat.
Ms. Wood said some activists compared Chinese practice to the demarcation in 2002 of the Chinese-Kyrgyz border during which the Central Asian nation handed over 1,250 square kilometres of land to China.

Another Facebook page, Kytai baskynchylygyna karshybyz (We’re against Chinese aggression) posted articles about Chinese mining companies operating in Kyrgyzstan, a target of Kyrgyz protesters, alongside articles depicting the intrusiveness of the crackdown in Xinjiang, according to Ms. Wood.

Ashlan Fu, the popular Dungan soup, could prove to be a litmus test of the depth of mounting anti-Chinese sentiment.

An Instagram account with a Stop China feed publishes xenophobic content about Chinese culinary habits as well as regular updates on the crackdown that is expanding into the autonomous region of Ningxia Hui.

Ningxia Hui recently signed a cooperation agreement on anti-terrorism with Xinjiang in a bid to learn from the crackdown on the Turkic Muslims or in the words of the Global Times, a Communist Party organ, “to learn from Xinjiang's experiences in promoting social stability.”

In advance of another protest at the Chinese embassy in Bishkek scheduled for January 17, Kyrgyz First Deputy Prime Minister Kubatbek Boronov called this week on the public not to believe anti-Chinese postings on social media.

In an acknowledgement of Kyrk Choro’s appeal, Mr. Boronov asserted that the group had denied participating in the December protest.

The government, much like Turkey and the vast majority of Muslim countries, has so far evaded taking China to task on its crackdown for fear of jeopardizing its relations with the People’s Republic.

Kyrgyz President Sooronbay Jeenbekov insisted last month that “the ethnic Kyrgyz of China are citizens of China, who obey the laws of their country. How can we intervene in their domestic matters? We can’t.”

If Kazakhstan where the issue of ethnic Kazakhs detained in China has flared up is anything to go by, the Kyrgyz government is walking a tightrope.

Asyla Alymkulova,  a Kyrgyz national recently established  the Committee to Protect the Kyrgyz People in China after her husband, Shairbek Doolotkhan, a Chinese-born Muslim, vanished in October on a business trip to Xinjiang.
Mr. Doolotkhan’s company subsequently advised Ms. Alymkulova that her husband had been "sent away to study" in a camp.

A Kyrgyz diplomat was among representatives of 12 non-Western countries whom China in the last week invited to Xinjiang to counter criticism of the crackdown and showcase economic and social progress. A group of foreign journalists was invited separately.

Short of a reunion with her husband, there is little that is likely convince Ms. Alymkulova or the relatives of thousands of other Central Asians, including at least 2,500 Kazakhs, that Chinese policy towards Muslims is benign and benefitting the community and the region’s progress.

That in turn will not make things easier for the Kyrgyz and other Muslim governments at a time that ethnic and cultural identities in a nationalistic and at times xenophobic environment are becoming prevalent. Kyrgyz attitudes towards Ashlan Fu may be the barometer.