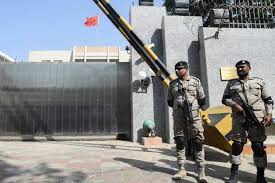 Two attacks in Pakistan, including a brazen assault on the Chinese consulate in Karachi, are likely to complicate prime minister Imran Khan’s efforts to renegotiate China’s massive, controversial Belt and Road investments as well as an International Monetary Fund (IMF) bailout and ensure that Pakistan is shielded from blacklisting by an international anti-money laundering and terrorism finance watchdog.

The attack on the consulate by three members of the Balochistan Liberation Army, a militant nationalist group seeking what it terms self-determination for the troubled, resource-rich, sparsely populated Pakistani province that constitutes the heartland of China’s US$45 billion investment and the crown jewel of its infrastructure and energy generation-driven Belt and Road initiative.

The attack, together with an unrelated suicide bombing by unidentified militants that killed 26 people and wounded 55 others in a market in the province of Khyber Pakhtunkhwa, comes at an awkward moment for Mr. Khan.

With Pakistan teetering on the edge of a financial crisis, Mr. Khan has been seeking financial aid from friendly countries like China, Saudi Arabia and the United Arab Emirates as well as a bailout from the IMF.

Responding to widespread criticism of Chinese investment terms that go beyond Baloch grievances, Mr. Khan is seeking to renegotiate the Chinese terms as well as the priorities of what both countries have dubbed the China Pakistan Economic Corridor (CPEC) that will link the crucial Baloch port of Gwadar with China’s troubled north-western province of Xinjiang, the scene of a brutal crackdown on Turkic Muslims.

However, Mr. Khan’s visit to Beijing earlier this month was less conclusive. Despite lofty words and the signing of a raft of agreements, Mr. Khan’s visit failed to produce any immediate cash relief with China insisting that more talks were needed.

China signalled its irritation at Mr. Khan’s declared intention to pressure China to change the emphasis of CPEC by sending only its transportation minister to receive the prime minister upon his arrival.

Amid criticism of CPEC by Baloch activists who charge that the province’s local population has no stake in the project and members of the business community who chafe at China importing materials needed for projects from China rather than purchasing them locally and largely employing Chinese rather than Pakistani nationals, Mr. Khan only elicited vague promises for his demand that the focus of CPEC on issues such as job creation, manufacturing and agriculture be fast forwarded.

China’s refusal to immediately bail Pakistan out has forced Mr. Khan to turn to the IMF for help. The IMF, backed by the United States, has set tough conditions for a bailout, including complete disclosure of Chinese financial support.

US Secretary of State Mike Pompeo warned in July that any potential IMF bailout should not provide funds to pay off Chinese lenders. US Pakistani relations dived this week with President Donald J. Trump and Mr. Khan trading barbs on Twitter.

The attack on the consulate coupled with Saudi Arabia’s financial support is likely to fuel long-standing Chinese concerns that Pakistan has yet to get a grip on political violence in the country. Chinese Foreign Ministry spokesman Geng Shuang said in response to the attack that China had asked Pakistan to step up security. Pakistan has a 15,000-man force dedicated to protecting Chinese nationals and assets.

China also fears that Balochistan could become a launching pad for potential US-Saudi efforts to destabilize Iran by stirring unrest among the Islamic republic’s ethnic minorities.

The attack together with the Khyber Pakhtunkhwa bombing not only signals a recent spike in political violence in Pakistan but also comes against the backdrop of increased incidents involving Iran’s Kurdish, Iranian Arab and Baloch minorities.

Earlier this month, Pakistan said it had rescued five of 12 abducted Iranian border guards, saying efforts to recover the other captives are ongoing. An anti-Iran Sunni Muslim militant organization, Jaish al-Adl or Army of Justice, kidnapped the guards a month ago in the south-eastern Iranian border city of Mirjaveh and took them to the Pakistani side of the porous frontier between the two countries.

The attack on the consulate as well as the bombing in Khyber Pakhtunkhwa are likely to increase pressure from the Financial Action Task Force (FATF), an international anti-money laundering and terrorism finance watchdog, and its Asian counterpart, the Asia Pacific Group (APG) to strengthen Pakistani compliance with international best practices.

An APG delegation expressed its dissatisfaction with Pakistani compliance in October and said it would report its findings to FATF by the end of this month. FATF put Pakistan on a grey list in February, a prelude to blacklisting if the country fails to clean up its act. Blacklisting could potentially derail Pakistan’s request for IMF assistance.

In sum, this week’s attacks put Pakistan between a rock and a hard place. Countering militancy has proven difficult, if not impossible, given the deep-seated links between government, political parties and militants, a web that includes Mr. Khan and many of his associates.