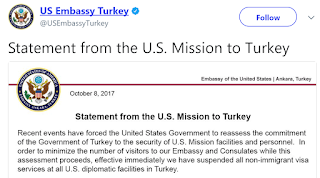 Moves by the United States and Turkey that largely ban travel of their nationals between the two countries is about more than two long-standing NATO allies having a spat amid shifting alliances in a volatile part of the world. It is a fight between two leaders, US President Donald J. Trump and his Turkish counterpart, Recep Tayyip Erdogan, confronted with the limitations and fallout of their shared desire to redefine or restrict basic freedoms.

The spat erupted when the US embassy in Ankara announced this weekend that it was suspending the issuance of non-immigrant visas as part of a reassessment of the “commitment of the government of Turkey to the security of U.S. mission facilities and personnel.” The embassy stopped short of banning travel by all visa holders.

Hours later, the Turkish Embassy in Washington went a step further by declaring that it had suspended all visa operations for US citizens, effectively banning all US passport holders from travelling to the country. “This measure will apply to sticker visas as well as e-Visas and border visas,” the embassy said. Turkey’s currency plunged in the wake of the announcement in early morning trading on Asian markets.

The spat is the latest escalation of tensions in a relationship that has been fraying for several years  as a result of increasingly authoritarian policies adopted by Mr. Erdogan, differences over the conflict in Syria, US cooperation with Syrian Kurds, the separate indictments in the United States of an Turkish-Iranian businessman on charges of busting sanctions on Iran and 15 Turkish security guards for involvement in a street brawl, and Turkish allegations of US interference in its domestic affairs.

The latest spat highlights the risks of Mr. Trump’s empathy for authoritarian and autocratic leaders that contrasts starkly with a stress on basic freedoms and the rule of law adopted by his predecessors. Mr. Trump last month described relations with Turkey as “the closest we’ve ever been.”

The spat amounts to the White House getting a taste of its own medicine of ignoring abuse of human rights by some of its closest allies. As a result, US nationals and government employees have become the victims of seemingly arbitrary crackdowns for political rather than national security reasons that violate basic freedoms and make a mockery of the rule of law.

The spat erupted after Turkey indicted in the last year two Turkish nationals working at US diplomatic missions in the country and detained at least a dozen other US nationals, including a Christian missionary, on charges of having ties to Fethullah Gulen, an aging Turkish preacher who has lived in exile in Pennsylvania for the past two decades.

Mr. Erdogan blames Mr. Gulen, the leader of one of the world’s richest Islamic movements and most far-flung education systems, for having last year engineered a failed military attempt to remove him from office. Some 250 people died in the attempt in which dissident Turkish tank commanders fired at the Turkish parliament building in Ankara.

The indictment of the Turkish nationals and arrests of Americans were part of a massive crackdown on government critics that involved the firing up to 150,000 public servants, arrest of tens of thousands, curbing of press freedoms and granting the president wide-ranging powers. Mr. Erdogan has repeatedly justified the crackdown as a legitimate response to the failed coup.

The targeting of Turkish nationals employed by the US government appeared to be a crude attempt to persuade the Trump administration to extradite Mr. Gulen, who has denied having any association with the attempted coup.

The administrations of both Mr Trump and President Barack Obama have rejected Turkish extradition requests because Turkey had provided insufficient evidence to substantiate it's claim that the preacher was responsible for the failed coup.

Mr. Erdogan also wants the release of Reza Zarrab, a Turkish-Iranian businessman with ties to Turkey’s ruling elite, who was arrested in Miami last year for helping Iran evade sanctions.

Mr. Erdogan last month suggested that he would be willing to swap Andrew Brunson, the detained missionary who ran a small Protestant church in the coastal city of İzmir, for Mr. Gulen. “‘Give us the pastor back,’ they say. You have one pastor (Gulen) as well. Give him to us. Then we will try (Mr. Brunson) and give him to you,” Mr. Erdogan said.

The spat constitutes a serious deterioration of US Turkish relations at a time that Turkish-backed rebels are battling Islamic militants in Syria's Idlib province. The fighting aims to drive back Al-Qaeda-linked forces and prevent the emergence of a Syrian Kurdish entity on Turkey's border in the wake of a recent Iraqi Kurdish vote for independence. It also comes as Turkey has forged closer ties with Iran to confront Kurdish moves and has stepped up co-operation with Russia in Syria.

Turkey is not the only country to detain US nationals or green card holders. Ola Al-Qaradawi, a 55-year-old research assistant and daughter of controversial Qatar-based religious scholar Yousef al-Qaradawi who has a green card, and her husband, Hossam Khalaf, have been held in solitary confinement since last year. Their only crime appears to be that she is related to a spiritual leader of the Muslim Brotherhood.

The United States has no consular obligations but Congressman Adam Smith, the top Democrat on the powerful House Armed Services Committee, has taken up their case.

Egyptian general-turned-president Abdel Fattah Al-Sisi, who came to power in a military coup in 2013 that toppled the country's first and only democratically elected president, has gone much further than Mr. Erdogan in brutally cracking down on opponents and freedoms.

In a rare break with apparent US neglect of abuse of human rights among its allies, Mr. Trump has cut military aid to Egypt, citing legal restrictions imposed on non-governmental organizations. The real reason was more likely Egypt’s relations with North Korea.

The Trump administration has suggested that it would review its aid decision if Egypt breaks off diplomatic relations with North Korea. Acting on US intelligence, Egyptian authorities seized in August a boatload of $23 million worth of rocket-propelled grenades shipped from North Korea and destined for Egypt. Egypt has denied that it was the intended end-user.

To be fair, the repressive policies of Messrs. Erdogan and Al-Sisi as well as Mr. Trump’s attitudes towards authoritarianism and autocracy and his efforts to redefine basic freedoms in the United States enjoy the support of segments of their populations.

As a result, the plight of US nationals and government employees in Turkey is unlikely to persuade Mr Trump to return to the more assertive advocacy of basic rights and the rule of law of his predecessors. It does, however, demonstrate that tacit endorsement of authoritarian or autocratic rule is not without risk for US citizens as well as foreign nationals employed by the US government.

Moreover, it suggests that lack of respect for human rights and the rule of law constitutes a slippery slope that ultimately could put US national security interests at risk on a far larger scale. That has been evident since the 2011 popular Arab revolts that has heralded an era of often volatile and violent transition in the Middle East for which no end is in sight. It is a convoluted and bloody process of change that poses multiple, often unpredictable challenges, many of which are exacerbated rather than alleviated by autocratic and authoritarian rule.

Dr. James M. Dorsey is a senior fellow at the S. Rajaratnam School of International Studies, co-director of the University of Würzburg’s Institute for Fan Culture, and co-host of the New Books in Middle Eastern Studies podcast. James is the author of The Turbulent World of Middle East Soccer blog, a book with the same title as well as Comparative Political Transitions between Southeast Asia and the Middle East and North Africa, co-authored with Dr. Teresita Cruz-Del Rosario and  Shifting Sands, Essays on Sports and Politics in the Middle East and North Africa
Egypt Turkey United States