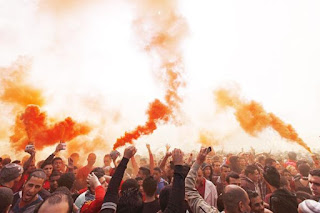 With Egypt qualifying for World Cup finals for the first time in 28 years and a crackdown on militant soccer fans that has put hundreds behind bars, pressure is mounting on the government to allow supporters back into stadiums from which they were banned for much of the last six years. It has also sparked calls for the release of incarcerated, militant and politicized fans who have been at the core of Egypt’s 2011 popular revolt and subsequent anti-government protests.

The pressure puts Egyptian general-turned-president Abdel Fattah Al-Sisi on the spot as he associates himself with the success of Egypt’s national team. Thousands poured into the streets of Cairo, a city that effectively bans mass demonstrations, to celebrate Egypt’s defeat of Congo.

Taking advantage of the fact that soccer in Egypt evokes the same deep-seated passion that religion does, Mr. Al-Sisi arranged to meet the team shortly after the its victory. The president rewarded the players with a $85,000 bonus each.

Mr. Al-Sisi’s celebration has, however, a dark side. Egyptians have largely been barred from stadiums since the day before the 2011 popular revolt erupted that forced President Hosni Mubarak to resign after 30 years in office. The ban is intended to prevent stadiums from again becoming venues for anti-government protest.

The government twice temporarily lifted the ban in a bid to test the waters. Both instances resulted in incidents in which tens of militant soccer fans died.

Some 74 fans were killed in 2012, the only period since 2011 in which the ban was lifted for a longer period, in a politically loaded brawl in the Suez Canal city of Port Suez for which many believe the military and security forces were responsible. The ban, effective for domestic rather than international matches, was re-imposed immediately after the incident, the worst in Egyptian sporting history, and has been in place since.

Another 20 were killed in a stampede in 2015 caused by security forces’ handling of the situation.
Authorities had wanted to test the waters by agreeing to allow a limited number of fans into a Cairo stadium for a domestic match. An Egyptian court last month sentenced two men to life in prison and a dozen others to jail terms ranging from two to ten years for the incident, which authorities blamed on the outlawed Muslim Brotherhood.

Soccer fans, who constituted the backbone of the student movement, drove mass student protests against Mr. Al-Sisi after he seized power in 2013 in a military coup that toppled Egypt’s first and only democratically elected president. The movement was brutally crushed as security forces took physical control of Egyptian universities.

Egypt’s parliament began this week discussing a lifting of the domestic ban after 60,000 fans attended without incident the World Cup qualifier in the Borg El-Arab stadium in the Mediterranean Sea city of Alexandria against Congo. Authorities allowed a maximum of 10,000 spectators to attend past international games in a bid to avoid censorship by world soccer body FIFA and ensure that the government did not get blamed for potential setbacks because fans were unable to give the team the necessary moral support.

Earlier attempts to lift the ban stranded on resistance from the interior ministry and security forces as well as a reluctance by clubs to shoulder the expense of engaging private security firms.
"We need the audience to come back again, everyone can see that that there is no acts of violations or destruction," said New Wafd Part deputy Hany Abaza.

The parliament debate was accompanied by calls by deputies for the release from prison of hundreds of ultras or militant fans, whose support groups were banned in 2015 as terrorist organizations, and granting them too access to stadiums.

Haitham al-Hariri, one of parliament’s few critical members, asked Mr. Al-Sisi to pardon the ultras. Muhammad al-Husini, another deputy, added his voice, saying that “we want President Al-Sisi to release the Ultras tomorrow or the day after tomorrow.”

Hundreds of ultras, battle-hardened, anti-authoritarian fans opposed to the commercialization of soccer and with a history of violent clashes with security forces, have been arrested in recent months for wearing jerseys with the number 74 on them in commemoration of those killed in Port Said, attempting to attend an international match, and disrupting the public order.

Some 500 members of Ultras White Knights (UWK), the militant support group of storied Cairo club Al Zamalek SC, were arrested in July as they tried to attend their team’s match against Libya’s Al Ahli Tripoli. About half have since been released; the others were scheduled to be tried by a military court. Pictures on social media showed fans ripping seats out of the Borg al-Arab stadium and throwing flares and other objects onto the pitch. Fans launched an online campaign with the hashtag #NoToMilitaryTrialsForFans.

“What is happening is an act of revenge against ultras for their participation in the January 2011 Revolution,” one fan, who escaped arrest, said.

Ultras pose a challenge to Mr. Al-Sisi because of their rejection of autocracy and their analysis of the power structure of Egyptian soccer. Fiercely independent, ultras view themselves as the only true supporters of their club and stake a claim to ownership of the stadium in a country that tolerates no uncontrolled public space. The ultras see club executives as corrupt pawns of the government and players as mercenaries who play for the highest bidder.

Said human rights activist Dalia Abdel Hamid: “The continued security crackdown on ultras reflects the state’s fear over the ways in which they organize, not only to cheer on their teams, but also to mourn fans who have died”

Dr. James M. Dorsey is a senior fellow at the S. Rajaratnam School of International Studies, co-director of the University of Würzburg’s Institute for Fan Culture, and co-host of the New Books in Middle Eastern Studies podcast. James is the author of The Turbulent World of Middle East Soccer blog, a book with the same title as well as Comparative Political Transitions between Southeast Asia and the Middle East and North Africa, co-authored with Dr. Teresita Cruz-Del Rosario and  Shifting Sands, Essays on Sports and Politics in the Middle East and North Africa
Al Zamalek Egypt Ultras World Cup