Seeing the Mid-East through football (Review of JMD book)

August 04, 2016
Seeing the Mid-East through football
The game is so popular that rulers try to commandeer it to enhance their prestige
By
John Gee 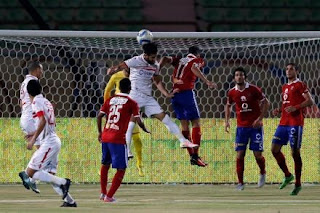 Football is so popular in the Middle East that it should perhaps not be surprising that rulers try to commandeer it to enhance their prestige. Saddam Hussein’s son, Uday, notoriously took a direct hand in managing the Iraqi national team, who were extravagantly rewarded for victories, but tortured and humiliated for whatever Uday saw as their failures. One former national team member recalls players being electrocuted, forced to play barefoot with a concrete ball in temperatures of 55 degrees C and having their heads shaved when the team failed to qualify for the World Cup. Al Saadi, son of Libyan leader Qaddafi, took charge of the Libyan Football Federation and is accused of murdering a player who accused him of being part of a dictatorship and corrupting the country.

Political rivalries in Turkey have often been expressed in football, whether in attitudes towards or of Kurdish players, the involvement of football fans with a record of enmity in protests over plans to redevelop Istanbul’s Gezi Park as a mall, or in the contest between president Erdogan and his rival, Fethullah Gulen, for control of Fenerbahce football club.

In Egypt, Cairo clubs al-Ahly and Zamalek were founded before the first world war as, respectively, nationalist and pro-monarchy football clubs. In modern times, networks of ardent fans known as Ultras gained experience in street clashes with the police, which they put to use when they came out in support of the 2011 demonstrations aimed at bringing down the Mubarak regime.

Dorsey argues that, without the Ultras participation, the activists in Tahrir Square might well have given way under attacks from the police and thugs mobilised by the regime. Despite arrests, the slaughter of 74 al-Ahly supporters by rival fans after a 2012 match in Port Said which the security forces, at the very least, allowed to happen, and the closure of most games to fans, Ultra networks remain strong and a cause of anxiety to the present regime.

Dorsey compares Bnei Sakhnin, a successful club based in the Israeli Palestinian town of Sakhnin, with Beitar, the Jerusalem club that has always been associated with the political right in Israel. Bnei Sakhnin’s team includes Jewish players, but Beitar takes pride in being the only Israeli club never to have hired a Palestinian player. When Bnei Sakhnin won an Israeli championship in 2004, Beitar fans declared a day of mourning.

Football has been a site of struggle over the status of women. In Iran and the Gulf states, efforts by women to be allowed to attend matches have met with fierce resistance from religious conservatives, but, little by little, women’s football is gaining ground. Iran’s ban on women’s soccer was lifted in 1998, Kuwait’s in 2010 and there’s a women’s soccer league that plays behind doors in the UAE. Saudi women footballers play semi-clandestinely. The Palestinian national women’s team’s members come from the less conservative parts of their country.

Dorsey argues that football is at present the only rival to religion in its mass appeal in the Middle East, following the decline of nationalist and leftist political movements. It seems that many Islamists might think so too, though they disagree strongly in their attitudes towards it.

While most Salafists regard football as a diversion from religious devotion, Osama bin Laden was an Arsenal fan. Other Islamists have seen football as positive. Hamas’s leader in Gaza, Ismail Haniyeh, is a football enthusiast and used to play for a local team. Hassan Nasrallah, Hezbollah’s leader in Lebanon, helped secure sponsorship of a popular club by al-Manar, the Hezbollah-run television station.

Dorsey concludes with the chapter “Competition on the World Stage”, which describes the consequences of Qatar’s successful bid to host the 2022 World Cup, murky goings-on around the leadership of the Asian Football Confederation, and Gulf investment in European football clubs.

The Turbulent World of Middle East Soccer is a highly original work. Time and time again, one is left with the feeling of looking beneath the surface of the familiar news reports from the region at deeper trends and telling details that are more revealing of what is going on in the Middle East than conventional news reports.