The contrast is rife with symbolism. It potentially offers alternative ways of understanding the parameters within which at least some Syrians who joined jihadist groups operate. It also provides an insight for peace negotiators expected to gather next week in Switzerland into what Syrians want once the guns definitively fall silent. Finally, it juxtaposes aspirations of those who saw jihadist groups as their only option with the brutal policy of IS to shape a new generation in its mould.

In a rare video timed for release during anti-Assad protests in areas in which a US-Russian sponsored cessation of hostilities largely took hold, Abdul Baset al-Saroot, the goalkeeper of the Syrian national soccer team until he became a leader in 2011 of anti-government protests in Homs, insisted that the rebellion would continue until Mr. Assad is toppled.

The video is significant because Mr. Al-Saroot, known not only for his soccer skills but also as a folk singer, turned jihadist after surviving attempts on his life and losing close relatives in government attempts to kill him. Mr. Al-Saroot reportedly initially joined Jabhat al Nusra, the Al Qaeda affiliate in Syria, and later switched to IS. Disgusted with IS’s practices, he was reported to have left IS several months ago to return to Homs from where the video emanated. Despite having broken with the two jihadist groups, Mr. Al-Saroot appears to maintain his Islamist stance while taking a stand that a broad segment of Syrians can buy into.

“The revolution continues. I swear this revolution will continue. I swear that even Russia, Iran, China and all allies of Bashar al-Assad and this criminal regime, even if all the world powers joined forces against us, this revolution will continue as will the Syrian people. This is a divine revolution. It had a divine beginning and it will have a divine ending. And we will never backtrack from our goal, which is toppling this regime. I swear, we will not give up,” Mr. Al-Saroot said lacing his political goal that harks back to the 2011 peaceful protests with a religious coating.

Mr. Al-Saroot then turned to one of his more popular songs to revive the spirit of the anti-Assad revolt.

Oh homeland, my love, home of the beloved soil,

Our martyr, no, he didn’t die; the girls cheer for him,

Our martyr, no, he didn’t die; the girls cheer for him,

Surrounded by servants and beautiful women,

We will continue this revolution until the very end,

Despite the religious framing of his words, Mr. Al-Saroot did not appear to be expounding the jihadist goal of a Pan-Islamist state, the embodiment of IS’s declaration of a caliphate. His call for continuation of what he termed a revolution came moreover as Jabhat al Nusra resisted the raising of the flag of the peaceful revolt in 2011 during mass anti-government protests in rebel held areas in which protesters chanted, “The revolution continues” and “Long live Syria, Down with Assad.” In some cases, Nusra went as far as trying to prevent the protests.

Mr. Al-Saroot’s Islamist framing coupled with his walking away from the major jihadist forces in Syria points to the fickle support that groups like Jabhat al Nusra and IS appear to enjoy. It is a support that speaks less of ideological commitment and more of lack of options. So does the eruption of peaceful anti-Assad protests the moment that the cessation of hostilities took hold. Mr. Al-Saroot’s insistence on the 2011 framing of the rebellion against Mr. Assad as a revolution was in line with the non-sectarian, political demands of the protesters.

“I am overjoyed. … We are protesting today just like we did back in 2011, but without bullets, and the security forces are not here to repress us… “We came to confirm that our revolution is ongoing, no matter what happens. We are a resilient and determined people, and we will not back down from our demands: a free Syria for all Syrians and free of Assad and terrorism. Thousands of martyrs have fallen, which makes us more determined not to back off on our rightful and legitimate demands,” Shamel el-Ahmad, one of the protests organizers, told Al-Monitor.

No doubt, one reason Mr. Al-Saroot walked away from IS, was the fact that the group is seeking to mould the next generation of people who fall under its administration in the tradition of its extreme brutality. A report, Children of the Islamic State, released earlier this month by the Quilliam Foundation, quoted the United Nations on how IS was encouraging young boys to play soccer with decapitated human heads to make brutal executions appear normal.

Soccer plays a role in IS recruitment in areas it controls even before children get to training camps. IS videos and photos show fighters playing soccer with boys in village and town squares and handing out footballs. IS has also used soccer in some of its recruitment videos. 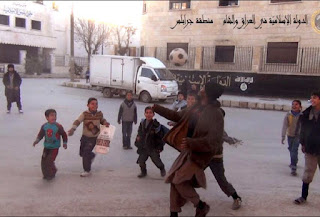 “ISIL (another acronym for IS) reportedly established at least three child training camps in Raqqa, and hundreds of boys as young as 10 years of age were imprisoned in Aleppo, forced to attend indoctrination seminars and promised salaries, mobile phones, weapons, a martyr’s place in paradise and the ‘gift’ of a wife upon joining ISIL… Children were also recruited as suicide bombers and used to perpetrate extreme violence,” the office of the UN Secretary General’s Special Representative for Children and Armed Conflict said in a report.

James M. Dorsey is a senior fellow at the S. Rajaratnam School of International Studies, co-director of the University of Würzburg’s Institute for Fan Culture, and the author of The Turbulent World of Middle East Soccer blog and a forthcoming book with the same title.
Islam Islamists Militant Islam Syria