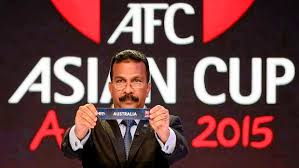 The Asian Football Confederation (AFC), despite multiple legal inquiries into global soccer governance and a massive corruption scandal, has rehired as a consultant its former general secretary, Dato’ Alex Soosay, less than a year after his departure as a result of this blog’s disclosure of Mr. Soosay's attempt to undermine an independent audit by requesting tampering with or destruction of documents.’

Mr. Soosay’s hiring, barely a month after AFC President Sheikh Salman Bin Ibrahim Al-Khalifa was defeated in elections for the head of troubled world soccer body FIFA, suggests that many regional and global soccer executives have yet to absorb the full impact of the corruption scandals and care little about appearances. Mr. Salman’s own record, particularly with regard to human rights, cast a shadow over his FIFA candidacy.

The AFC as a body has so far not been named in legal investigations by Swiss and US authorities that have already led to multiple indictments but is indirectly involved given that its former president, Mohammed Bin Hammam, is at the centre of the Swiss investigation and believed to be an unidentified co-conspirator in US indictments. It was documents related to an independent audit into Mr. Bin Hammam’s financial management of the AFC that Mr. Soosay allegedly sought to have altered or destroyed.

“Asian football is benefiting tremendously from Dato' Alex Soosay's unrivalled expertise and experience of the world game in his role as a consultant to the Asian Football Confederation (AFC).
He has the ability to contribute significantly on specific projects in which he has detailed knowledge such as the extension of the AFC building and the AFC Asian Cup. Dato’ Alex has the full support of the AFC President, General Secretary and management in this role which will assist the future development of the AFC as it strives to become the world's leading football confederation,” the AFC said in a statement.

Mr. Soosay officially resigned in June 2015, two months after this blog disclosed a statement by then AFC Financial Director Bryan Kuan Wee Hoong that was video-taped and taken down in writing by FIFA security officer Michael John Pride. In the statement, Mr. Kuan asserted that Mr. Soosay had asked him to tamper with or hide documents related to enquiries by PricewaterhouseCooper (PwC) and FIFA into management of the group by Mr. Hammam.

The audit served as the basis for FIFA’s banning for life from all professional soccer-related activity of Mr. Bin Hammam, who also was a member of the world body’s executive committee. The AFC announced that it was investigating the matter which it described as FIFA rather than AFC-related following the disclosure in this blog but never reported the outcome of its inquiry. The AFC’s statement last June on Mr. Soosay’s departure made no mention of the allegations or the group’s investigation.

Mr. Salman has buried the audit that recommended that the AFC seek legal advice related to possible civil or criminal charges against Mr. Bin Hammam and to the possibility of cancelling or renegotiating the group’s $1 billion master rights agreement with Singapore-based World Sport Group (WSG) which was negotiated by the disgraced AFC official. WSG has since been renamed as part of Lagardere Sports and Entertainment.

Mr. Soosay has repeatedly denied the allegation that he had sought to have documents related to the PwC audit altered or destroyed.

Mr. Kuan asserted in his statements that Mr. Soosay, concerned that he could be implicated in the Bin Hammam investigations, had asked Mr. Kuan whether he believed that the AFC general secretary could be “blamed or has committed crimes or violated any laws based on the information that could be contained in the audit.” Mr. Kuan quoted Mr. Soosay as saying “protect me” and asking, “Can you tamper or hide any documents related to me?”

In his statements, Mr. Kuan said Mr. Soosay had not identified specific documents but that he had concluded from the conversation that the AFC general secretary was referring to documents that he had signed, particularly related to cash advances to Mr. Bin Hammam, a key element in the PwC’s audit.

In response to Mr. Kuan’s refusal to act on the request, Mr. Soosay said, according to Mr. Kuan: “I should have tampered or got rid of the documents before PwC conducted this audit.”

Mr. Kuan suggested in the video that it was not the first time that Mr. Soosay had made the request. "When it was confirmed PwC was going to do the investigation, I had a separate conversation with him (Soosay) and he told me clearly that anything related to him, don't give to them (PwC)," Mr. Kuan said.

Mr. Kuan quoted then AFC Director Member Associations Relations and Development James Johnson as telling him that Mr. Soosay had made a similar request to Mr. Johnson. Mr. Johnson has since left the Asian group to join FIFA. Mr. Johnson, who was at the time reportedly supervising the investigations, was not available for comment.

In his written declaration, Mr. Kuan said that “this statement made accurately by me sets out the evidence that I would be prepared, if necessary, to provide to a football governing body and court as a witness.”

Asked in the video why Mr. Soosay would want the documents tampered with or hidden, Mr. Kuan said: "I'm not sure ... possibly because he is afraid he may be accountable for signing the payment instruction and that he didn't question it."

The PwC audit, which held out the possibility that Mr. Bin Hammam’s management of the AFC could have involved bribery, money laundering and busting of international sanctions, warned that “our transaction review revealed that items sampled were, in most cases, authorised by the General Secretary (Soosay) or Deputy General Secretary and the Director of Finance. As signatories these parties hold accountability for the authorisation of these transactions.  We also note the Internal Audit and Finance Committees were aware of this practice.”

Mr. Soosay’s rehiring suggests that Mr. Salman despite soccer governance’s massive corruption scandal has no intention of getting to the bottom of what may or may not have happened within the AFC and no apparent desire to clean house and ensure that the group adopts the transparency and accountability measures and structures that could bolster its ambition to become the world’s leading football confederation.

Dr. James M. Dorsey is a senior fellow at the S. Rajaratnam School of International Studies, co-director of the University of Würzburg’s Institute for Fan Culture, and the author of The Turbulent World of Middle East Soccer blog and a forthcoming book with the same title.
AFC FIFA Sheikh Salman