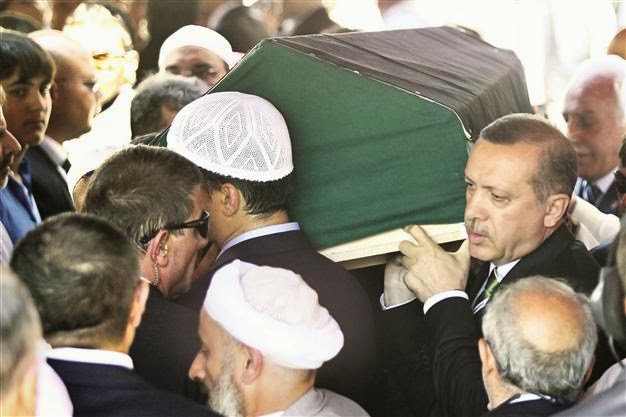 Turkish president Recep Tayyip Erdogan’s illiberal policies have targeted the media, the judiciary, the police, militant soccer fans, and anti-government protesters. Now they threaten to claim yet another victim: the game of football itself.

In a major blow to troubled Turkish soccer, Yildiz Holding, a conservative conglomerate known for its confectionary and biscuit business and close ties to Mr. Erdogan that is one of Turkey’s largest sponsors of soccer, said in a letter to the Turkish Football Federation (TFF) that it would no longer fund the sport because of violence and tensions associated with it and government efforts to politically control the beautiful game.

The company’s reference to tensions was not simply a reference to stadium incidents but also to Mr. Erdogan’s interference in a match-fixing scandal, attempts to depoliticize stadia, and legal proceedings against members of Carsi, the militant support group of storied Istanbul club Besiktas JK.

Carsi, one of Turkey’s most popular fan groups stands accused of being a terrorist organization whose members sought to overthrow the government. The charges are based on Carsi’s key role in the mass-anti-government Gezi Park protests in 2013. The trial was postponed until April after the first day of hearings in December.

The charges are part of a government effort to purge dissent from the pitch. It started immediately after the Gezi park protests with the banning of chanting or display of banners with political slogans and a demand that spectators sign a pledge before entering a stadium that they would refrain from participating in activities during matches that could “trigger mass, political or ideological events.” Carsi’s response to the government efforts was to chant during matches, "everywhere is Taksim, everywhere is resistance."

Match attendance has moreover dropped dramatically as a result of a fan boycott of Passolig, an electronic ticket system, that critics charge is designed to give the government access to fans’ personal data. A recent match in Istanbul’s 82,000-seat Ataturk Olympic Stadium between Besiktas and Eskeshehirspor Kulubu that would normally have been attended by some 20- 30,000 spectators drew only 3,000 fans. Ticket sales for matches of Galatasaray SK, another Istanbul giant, are down by two thirds with fans gathering in cafes and homes to watch games they would have attended in the past.

Yildiz Holding has over the last decade invested some $215 million in Turkish soccer with sponsorships of major clubs such as Besiktas JK, Bursapor FC, Fenerbahce SK, Galatasaray and Trabzonspor FC as well as the Turkish national team.

The company’s decision is not simply a setback for Turkish soccer but for Mr. Erdogan personally whose family has a long association with Yildiz and its owners, the Ulker family, who made their name as successful, religiously conservative entrepreneurs. Yildiz chairman Murat Ulker moreover was a classmate of Prime Minister Ahmet Davutoglu in Istanbul’s prestigious boys' school, Istanbul Erkek Lisesi.

Members of the prime minister’s family owned in the past up to 50 percent of Emniyet Foods, the distributor of Yildiz’s Ulker brand, as well as a stake in Ihsan Foods, the distributor of the company’s dairy products and Yenidogan Foods Marketing, its soft drinks distributor. Writing in Middle East Quarterly, Michael Rubin reported that Turkey’s Kemalist military long refused to buy Yildiz products because of the Ulker family’s religiosity.

Yildiz chairman Murat Ulker said in his letter to the Turkish federation, according to Hurriyet newspaper that “I have to let you know that unfortunately, today it has become meaningless to support teams or games thanks to such a fall in interest and value… When we became a sponsor, what we had in mind was the development of Turkish football, raising new players and success in Europe and the world. However, at the end of the day, we could not find what we were looking for,”

Mr. Ulker asserted elsewhere that soccer’s brand value had deteriorated because stadia were empty and the current soccer environment no longer stroked with notions of fair play. “No one wants their information to be collected, even by the state; this is disturbing. Many fan groups have boycotted the practice, which has added to the low attendance numbers. It is impossible to not admire the spectators in the UK or Germany. I am very sad for the country. I went to a game in the UK. recently and the atmosphere was great. This is what we cannot find in Turkey. We should not block the joy from the fans,” Mr. Ulker said earlier this month in an interview with Haberturk.

The government has sought to drive a wedge between militant fans and other supporters by arguing that e-ticketing was a way to combat illegal ticket scalping, increase tax revenues and ensure that stadia are safe for families.

That portrayal was rejected by some 40 fan groups who charged in a statement last year that “the e-ticket system does not only demote the concept of supporters to a customer, but it also files all our private data. The system aims to prevent supporters from organizing and is designed to demolish stadium culture and supporter identity.”

To be fair, Turkish stadia have a long history of violence. A third of Carsi’s original founders have died a violent death since the group’s founding in the early 1980s. A truce arranged at a gathering of heavily armed rival supporters after a Besiktas fan was trampled to death in 1991 by his Galatasaray adversaries reduced but did not put an end to the violence. Two Leeds United fans in Istanbul for their team’s match against Galatasaray were stabbed to death in 2000 during a soccer riot on Taksim. Stray bullets fired into the air to celebrate the Turkish team’s victory killed a third person and wounded four others.

The high stakes battle over e-ticketing goes to the heart of a struggle for Turkey’s soul that erupted with the Gezi Park protests sparked by Mr. Erdogan’s effort to impose greater control on people’s lives and restrict personal and political freedom and unfettered access to information. Fans moreover are irked by the president’s manipulation of due process in what was the most serious match fixing scandal in the history of Turkish soccer, a run-up to his squashing of an investigation into the most serious corruption scandal in his career.

“While Turkey seems to be on a downward path in democracy, freedom of speech and fighting against corruption, the situation of the country’s football is no different… If other sponsors follow Ulker’s footsteps, accompanied by the continued boycott of the supporters, Turkish football might have a chance to die in peace, rather than struggling to survive in such dire conditions. Maybe then we can have a chance to reclaim the ‘beautiful game’ cleared of violence, politics and match fixing,” Hurriyet columnist Ozgur Korkmaz said in an editorial entitled “Dear sponsors, please let Turkish football die.”

James M. Dorsey is a senior fellow at the S. Rajaratnam School of International Studies as Nanyang Technological University in Singapore, co-director of the Institute of Fan Culture of the University of Würzburg and the author of the blog, The Turbulent World of Middle East Soccer, and a forthcoming book with the same title.
Besiktas Bursaspor Fenerbahce Galatasaray Trabzonspor Turkey