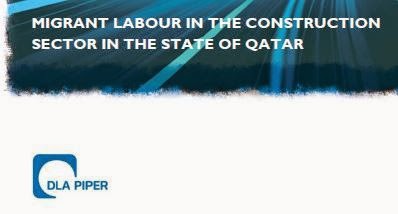 2022 World Cup host Qatar has announced a series of reforms to improve working and living conditions of its majority migrant labour population that address material concerns but fall short of recommendations made in a government-sponsored study and demands of trade union and human rights activists.

The litmus test for Qatar’s effort to address the most heinous aspects of its controversial kafala or sponsorship system will be a judgement this spring by world soccer body FIFA on whether the measures are sufficient to uphold the Gulf state’s right to host one of the world’s foremost sporting mega events.

The Gulf Times, a major English-language Qatari paper with close ties to the ruling family in what is a controlled media environment, touted the reforms as evidence of the Gulf state’s ”keenness to better labour standards.” The announcement of the reforms was Qatar’s making good on a pledge to change its labour laws by the end of this year.

The reforms aim to ensure timely payment of wages, ease restrictions on leaving the country, eliminate financial liability of employers for their employees, facilitate workers’ ability to find new employment once their contract terminates, prevent confiscation of workers’ passports, ensure proper housing and mechanisms to monitor adherence to employers’ legal obligations, and introduce a model contract.

The reforms are in line with recommendations incorporated in a report by British-based law firm DLA Piper that was commissioned by Qatar and has been adopted by FIFA as its yardstick for assessing Qatari progress in addressing labour issues. They reduce but do not eliminate the core of the kafala system that puts employees at the mercy of their employers and has been denounced by activists as constituting modern slavery.

In its summary of the reforms, The Gulf Times however made no mention of a series of recommendations that are central to FIFA’s evaluation and activists’ demand. The most immediate unaddressed recommendation in terms of FIFA is the report’s call for the establishment of an independent commission to oversee the reform process.

Theo Zwanziger, the FIFA executive committee member mandated to monitor Qatari progress, warned earlier this month that the world body’s members could deprive Qatar of its World Cup hosting rights at a FIFA congress in May if it failed to establish the commission by March 10 2015. “Unfortunately, almost nothing has happened until today. I strongly doubt the will to change something of the Qataris,” German publication Sport Bild quoted Mr. Zwanziger as saying.

Among other key recommendations spelled out in 14 pages of the 139-page report that appear to remain unheeded by the announced reforms and are likely to provoke the ire of trade union and human rights activists are a call for introduction of a minimum wage that would abolish discriminatory salary scales based on nationality; recognition of workers’ right to freedom of movement, association, representation and collective bargaining; criminalization of breaches of health and safety standards; and transparency on incidents of work-related injuries and deaths.

A number of these recommendations such as transparency on work-related incidents could have been incorporated in the current reforms without sparking political controversy in a country where nationals account for only 12 percent of the population and fear that granting rights to foreigners would threaten their culture and grip on their society and state. Incorporation would have served as further evidence of Qatar’s sincerity amid continued negative reporting on workers’ conditions. The Guardian reported this weekend that in 2014 a Nepalese worker employed on World Cup-related projects had on average died every two days. The paper asserted that the death toll would rise to one a day if the deaths of Indian, Sri Lankan and Bangladeshi workers were included.

Similarly, the Gulf Times cited as evidence of Qatar’s keenness to improve workers’ conditions the adoption by two major Qatari institutions, the Qatar Foundation and the 2022 Supreme Committee for Delivery & Legacy, of standards that go a far way to improve workers’ living and working conditions. Those standards, which are applicable only to the two institutions’ contractors, could have been included in the labour law changes that would have made them nationally binding. The citation appeared however to suggest without stating that explicitly that the standards would serve as the basis for a new national model for workers’ contracts.

By the same token it remains unclear how the easing of departure from Qatar of migrant workers by abolishing the requirement of an employer’s consent and replacing it with a 72-hour grace period managed by the interior ministry squares with the DLA-Piper’s recommendation of recognition of the right to freedom of movement.

To be fair, the lawyers’ call for workers’ freedom of association, representation and collective bargaining, goes to the core of Qatari society, politically and socially. It calls into question not only the autocratic nature of Qatari rule, but also fuels fears of the minority population of Qatari nationals to whom greater rights for foreigners constitute an existential threat. Many Qataris privately acknowledge that the demographics of their country are unlikely to change but seem unwilling to do more than tinker with their system at the fringe in the absence of a solution that does not threaten their culture and grip on society.

The risk is that legitimate Qatari fears will keep Qatar’s at odds with the trade unions and human rights groups. Qatar’s probable advantage is that in terms of the World Cup FIFA is more likely to focus on working and living conditions than on workers’ political rights.

James M. Dorsey is a senior fellow at the S. Rajaratnam School of International Studies, co-director of the University of Wuerzburg’s Institute for Fan Culture, a syndicated columnist, and the author of The Turbulent World of Middle East Soccer blog and a forthcoming book with the same title.
FIFA Qatar World Cup 2022