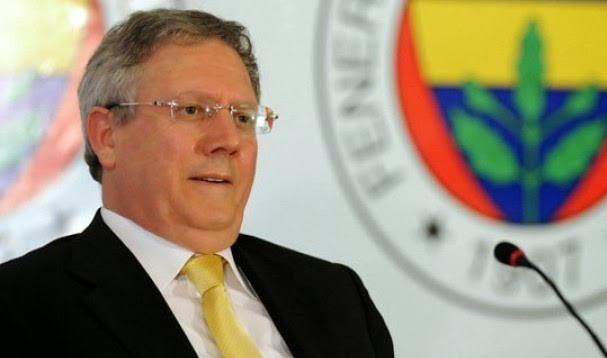 When Aziz Yildirim, the head of Turkey’s foremost soccer club, Fenerbahce SK, denounced this week an appeals court decision upholding his conviction in a massive match fixing scandal, he drew a parallel with a construction-related corruption scandal that is rocking the government of Prime Minister Recep Tayyip Erdogan and pitting the country’s foremost Islamist factions against one another.

Mr. Yildirim’s comparison stands on strong ground despite the fact that most experts on Turkish soccer as well as fans, including those of Fenerbahce, concede that Turkish football is thoroughly corrupt and that match fixing is a fact of life. Mr. Yildirim was sentenced to six years and three months in prison and is barred from serving as a club official. He has one last chance to appeal which would allow him to remain in office until he has exhausted his options.

In a statement following the court decision, Mr. Yildirim suggested the verdict was part of a power struggle between Mr. Erdogan and Fethullalh Gulen, the prime minister’s Islamist ally-turned-nemesis. Mr. Erdogan has accused Mr. Gulen, a self-exile Islamist preacher who operates a global media, education and business empires estimated to be worth $20 billion, of establishing a state within the state.

Mr. Gulen initially supported Mr. Erdogan’s rise to power and worked with him to bring the powerful
Turkish military under civilian control. The two men’s political and commercial power base is inextricably intertwined but their interests have over time diverged as Mr. Gulen targeted urban conservatives while Mr. Erdogan strengthened his hold on the rural vote. In a prelude to the construction scandal, Mr. Erdogan attempted last fall to curb Mr. Gulen’s influence by announcing that he would shut down tutoring schools operated by the preacher’s movement.

The high stakes power struggle between the two men, already evident in the match fixing scandal, moved into high gear in December when an investigation by the police and judiciary, believed to be populated by supporters of Mr. Gulen, into a construction-related corruption scandal forced four of the prime minister’s ministers to resign and a reshuffle of Mr. Erdogan’s cabinet. Mr. Gulen has denied any association with the investigation.

Many in Turkey nonetheless give credit to the corruption allegations but believe that the timing of the arrests raises questions about the independence of the police and the judiciary. Those qualms are certain to be discussed during Mr. Erdogan’s visit this week to Brussels and the European Union designed to give a new boost to Turkey’s EU membership bid.

Mr. Erdogan has charged that the investigation was an attempt to undermine him in advance of crucial municipal elections in March that are widely expected to be interpreted as a referendum on his increasingly troubled rule. At stake in the battle with Mr. Gulen and the elections that are to be followed by Turkey’s first ever direct election of its president is not only Mr. Erdogan’s political future but also history’s initial judgement of moderate political Islam’s foremost foray into government. Mr. Erdogan, whose status as the successful embodiment of moderate political Islam has suffered a series of setbacks that started with last June’s mass anti-government Gezi Park protests, risks seeing his reputation irreparably damaged.

Much like in the match fixing scandal, Mr. Erdogan has sought to limit the political fallout of the construction scandal by cleansing institutions of his opponents and seeking to control the legal process. Up to 2,000 police officers have been either relieved of their duties or moved to other jobs in recent weeks as have prosecutors who ordered the detention of three sons of ministers as well as the head of state-owned Halkbank. Among the prosecutors shoved aside is Zekeriya Oz, the man who initiated the investigation into the match fixing scandal.

"I, Aziz Yildirim, do not respect this illegal judgement, I do not recognise this political decision," Mr. Yildirim said. His statement was echoed by Mr. Erdogan who described the appeals court decision as a political manoeuvre in advance of the municipal elections.

Mr. Yildirim was first sentenced to jail in 2012 and fined some 500,000 euros for match-fixing during the 2010-2011 season and of forming a criminal gang, but was freed pending his appeal.

Mr. Erdogan, a former soccer player and Fenerbahce fan, has fought hard in the past 2.5 years to spare Mr. Yildirim the worst. He viewed the corruption charges against the soccer boss as an effort by Mr. Gulen, a man some prominent players consult before deciding to switch clubs, to muscle his way into what the prime minister considered his political domain. Mr. Gulen was believed to have wanted Mr. Yildirim removed so that someone closer to his movement could take control of the club.

In standing up for Mr. Yildirim, Mr. Erdogan hoped to garner support among millions of fans of Fenerbahce, the crown political jewel in Turkish soccer. Many of those fans however joined supporters of Istanbul arch rivals Besiktas JK and Galatasary SK in manning the front lines last June in mass anti-government demonstrations. Mr. Erdogan’s government has since sought to criminalize militant fan groups.

If the degree of Mr. Erdogan’s success in seeking to shield Mr. Yildirim is any indication, the jury remains out on whether he can insulate himself from personal involvement in the construction corruption scandal that involves the awarding of large public works to groups close to the government, amendments to zoning laws that favoured those groups and patronage politics that generated funding for the prime minister’s political machinery.

Mr. Yildirim was convicted despite Mr. Erdogan’s manipulations that initially lead to the soccer club chairman’s acquittal by the Turkish Football Federation (TFF). That however did not stop supporters of Mr. Gulen in the judiciary from pursuing the matter. It also did not prevent European soccer governing body UEAFA from banning Fenerbahce from European tournaments for two years on charges of match fixing.

Nevertheless, Mr. Erdogan’s intervention was in many ways a dry run for his effort to manage the construction scandal, the most serious crisis in his decade in office which catapulted him into becoming the third most important leader in modern Turkish history after Kemal Mustafa Ataturk, the visionary who carved Turkey out of the ruins of the Ottoman empire, and Turgut Ozal, the conservative politician who liberalized its economy and was the only politician prior to Mr. Erdogan to successfully stand up to the military.

As the match fixing scandal erupted and Mr. Yildirim and 92 others were indicted on match fixing-related charges, Mr. Erdogan and Mr. Gulen adopted diametrically opposed positions. Mr. Gulen’s position constituted an early indication that he was ready to challenge Mr. Erdogan’s grip on power.

While Mr. Gulen and his supporters pushed for harsh sentences, Mr. Erdogan forced a law through parliament that limited the penalties for both officials and clubs. The law prevented Mr. Yildirim from being sentenced to tens of years in prison. The TFF meanwhile rejected a proposal backed by the prime minister that would have shielded clubs guilty of match fixing from being relegated.

Three months later, Mr. Erdogan succeeded in getting the federation to clear Fenerbahce as a club and 15 others of charges of involvement in match-fixing. His interference prompted the TFF’s three top officials, including its vice chairman, Gospel Gumusdag, a brother-in-law of Mr. Erdogan, to resign.  Mr. Erdogan defended his moves on the grounds that punishing institutions rather than individuals would amount to penalizing “millions of fans who set their hearts on these institutions.''

James M. Dorsey is a Senior Fellow at the S. Rajaratnam School of International Studies (RSIS), Nanyang Technological University. He is also co-director of the University of Würzburg’s Institute for Fan Culture, and the author of The Turbulent World of Middle East Soccer blog and a forthcoming book with the same title.
Fenerbahce Turkey UEFA Ultras